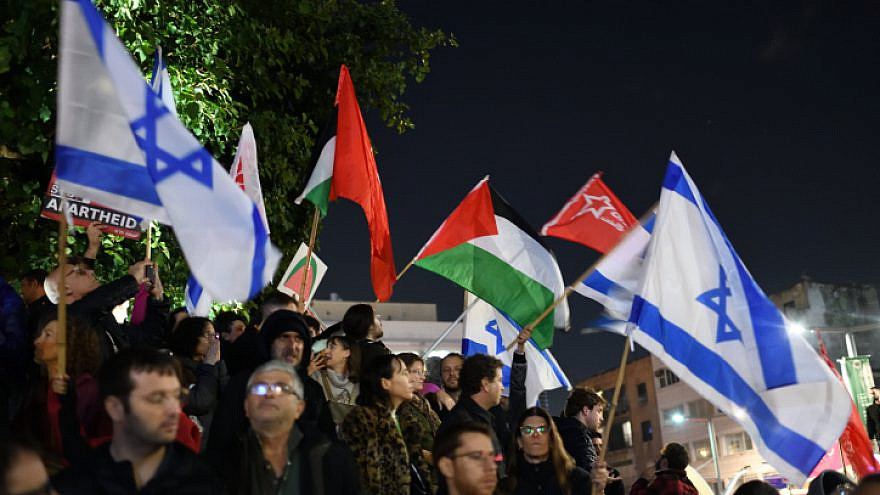 (January 19, 2023 / JNS) The first mass rally against the current Netanyahu government, on Jan. 7, was very left-wing—even radically so, observers from both sides of the political aisle agreed. The demonstration, ostensibly against the coalition’s proposed legal reforms, featured “anti-occupation” slogans and PLO flags, and was headlined “March of Rage,” terminology that could have been on loan from Gaza.

Some protesters openly wondered what one issue had to do with the other. A left-wing journalist voiced fears that center-left protesters, whose concern was defending the Supreme Court, would feel they had been deceived and would stay home the next time.

But something strange happened on the way to the second demonstration: The far-left groups that had played so prominent a role in the first disappeared, to be replaced by one organizer, the Movement for Quality Government in Israel (MQG).

“On the promo poster for the second rally [on Jan. 14], their logo alone appeared. All the other organizations that had been listed on the poster from the first demonstration were gone. It looked like the Movement for Quality Government was solely responsible for the second demonstration,” said Alon Schvartzer, head of the research and policy division for Im Tirtzu, a Zionist NGO. 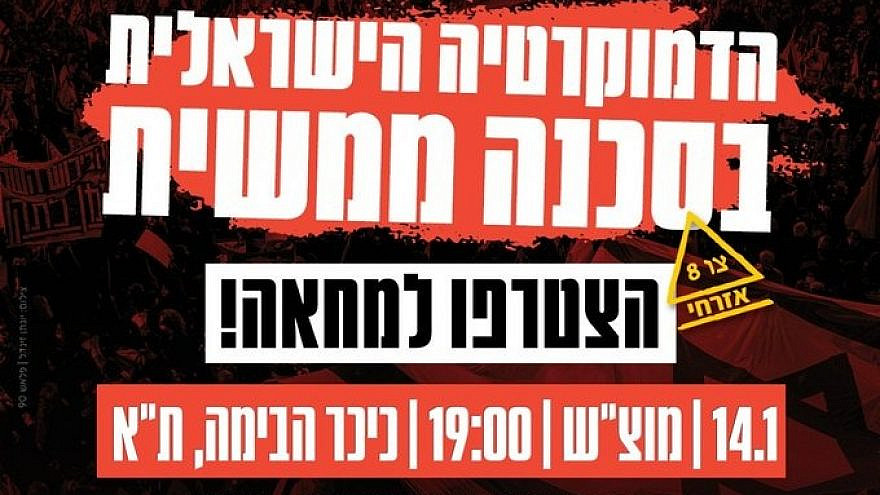 The second demonstration on Jan. 14 featured only the Movement for Quality Government in Israel as the sponsor.

Schvartzer said that his guess is the change came as a result of pressure by politicians such as opposition leader Yair Lapid and Benny Gantz, head of the National Unity Party, who didn’t want to risk being associated with radical groups and Palestinian flags. “In the next election, they want to appeal to people from the center, not the left, or in this case, the radical left,” he explained to JNS.

There is evidence, albeit circumstantial, to back Schvartzer’s claim. Neither Lapid, Gantz nor any major opposition leader attended the first rally. The most prominent politician present was Labor Party leader Merav Michaeli, along with a few Knesset members, including fellow Labor member Gilad Kariv. Ayman Odeh, leader of the Arab Hadash-Ta’al Party, also attended, as did former politician Tzipi Livni.

Shvartzer added that Lapid and Gantz started calling for people to take to the streets in early December. Clearly, something didn’t sit right with them if they didn’t participate in the first mass rally.

The situation changed somewhat during the second rally. Gantz made an appearance, as did fellow National Unity party lawmaker Gadi Eisenkot. Former politician and member of Gantz’s Blue and White faction Moshe Ya’alon also attended. However, Matan Kahana, one of the more right-wing members of Gantz’s party, did not, saying he didn’t want to be seen standing next to Palestinian flags.

The third protest, scheduled for Saturday evening, looks to see the full weight of the opposition parties in attendance as Lapid has reversed an earlier decision to avoid mass rallies. “Come and protect our beloved country from democratic ruin. Yes, I’ll be there too,” he said in a social media video post.

The risk of being associated with radicals has diminished, said Schvartzer, noting the Movement for Quality Government is considered mainstream among left-wing demonstrators. “It’s not a grassroots group but it has succeeded in presenting itself as one of the leaders of big anti-Netanyahu demonstrations in the past year. It has a large budget,” he said.

Unlike the other left-wing groups, the organization is focused on legal issues. It was one of the petitioners to the Supreme Court in the recent Aryeh Deri case, which led the high court to rule against the Shas Party chairman serving as a cabinet member in the Netanyahu government.

Promotional material for the third protest, scheduled for Saturday evening, Jan. 21, again lists as its sponsor only the Movement for Quality Government, or in some cases, adds “and protest groups,” which go unnamed.

While some may have been concerned that the far-left nature of the first demonstration would put people off, such fears proved unfounded. From a crowd of 20,000 at the Jan. 7 rally at Habima Square in Tel Aviv, the numbers swelled to 80,000 at the second.

“The mainstream news channels didn’t talk about the radical left orientation of the first rally,” said Schvartzer. “Instead, they featured the president of the Supreme Court telling us that we need to do something to stop the reforms. So people went to the demonstration and they got that impressive number.”

Prime Minister Benjamin Netanyahu expressed his dissatisfaction with the media at the weekly cabinet meeting the day after the first rally.

“I was simply shocked. I saw posters over the weekend that compared the minister of justice [Yariv Levin] to the leader of the Nazis. They talked about the Sixth Reich [a reference to Netanyahu’s current sixth government]. This is wild incitement that passed without any condemnation from the opposition or the central media channels,” he said.

Makor Rishon investigative reporter Shilo Freid told JNS that Standing Together was the main organizer of the first rally. The stage was decorated in the organization’s color scheme and logo. Its purple signs were seen throughout the crowd. He described the group as a leader of radical leftist activities. He says it isn’t involved with legal issues, but rather is focused on ending the “occupation.” Its website says it’s “a grassroots movement mobilizing Jewish and Palestinian citizens of Israel in pursuit of peace, equality, and social and climate justice.”

Freid emphasizes that the associations behind the rally are heavily funded from abroad. Twenty-seven percent of Standing Together’s budget comes from foreign sources, he said, citing Guidestar Israel, a website providing information on non-profits and operated by Israel’s Ministry of Justice.

Standing Together also received $1,026,222 in 2012-2021 from the New Israel Fund, according to Im Tirtzu’s research. A U.S-based NGO known for financing controversial groups, the Israeli branch of New Israel Fund stepped out of the shadows to openly tout its financial support for the first rally, telling its supporters in an email that it had “assisted with a special grant to the many civil society organizations that took part in the production of the giant demonstration on Saturday night in Tel Aviv.” 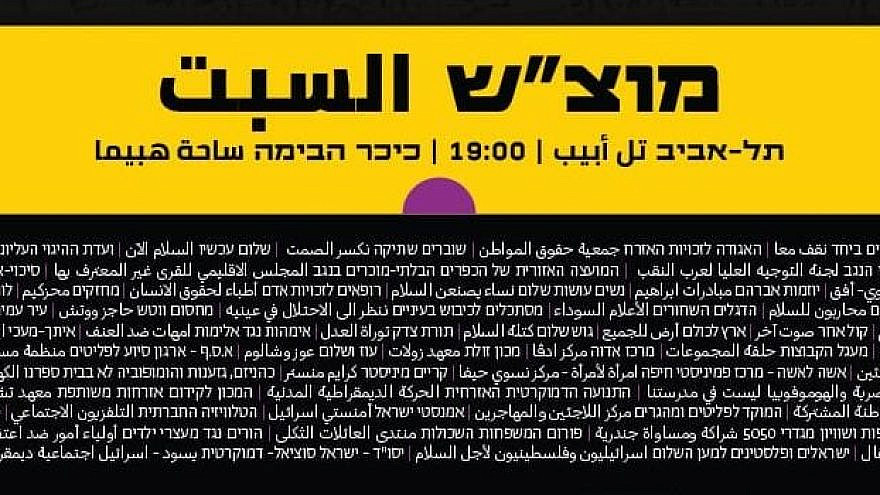 The first demonstration’s poster included a host of far-left groups, most unconnected to the issue of judicial reform.

Other groups involved in organizing the first protest were Breaking the Silence (its co-directors Avner Gvaryahu and Yael Lotan were featured speakers), the Association for Civil Rights in Israel and the Abraham Initiatives. All three enjoy generous financial support from the European Union.

Too many groups to mention were included on the poster advertising the first rally. The fight to block reforms to the Supreme Court is one that affects them directly, Schvartzer noted.

“The Supreme Court is like their second home. It’s where they focus their activities. Some appeal to the court 40 to 50 times a year. Taking away the Supreme Court’s power is like taking away their own because they don’t have the support of the Israeli people,” he said.