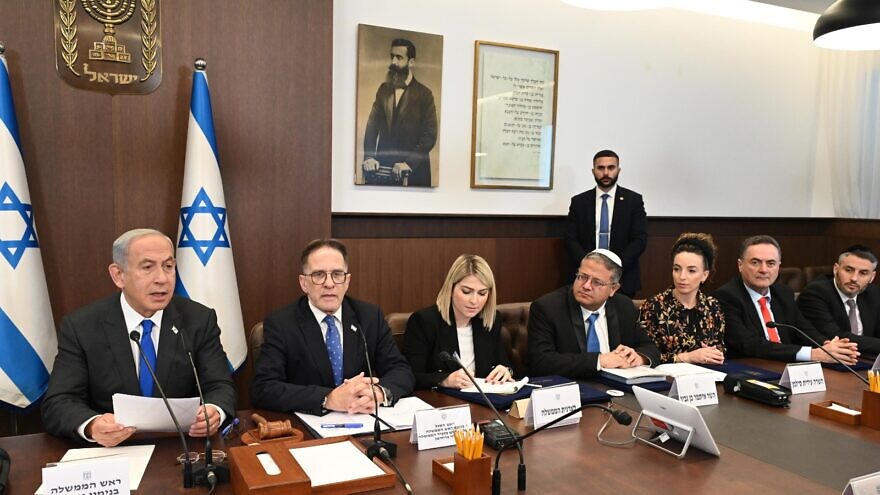 (January 8, 2023 / JNS) Israeli Prime Minister Benjamin Netanyahu on Sunday rejected as “baseless” claims by critics that his government’s proposed judicial reforms would mark the end of the country’s democracy, and vowed to implement the plan “responsibly.”

“The truth is that the balance between the branches of government has been violated over the past two decades,” Netanyahu said at the start of the weekly Cabinet meeting. “This unusual phenomenon does not exist anywhere else in the world—not in the United States, not in Western Europe and not during Israel’s first 50 years of existence.”

The attempt to restore the “correct balance” between the branches of government “is not the destruction of democracy, but the strengthening of democracy,” he added.

Israeli Justice Minister Yariv Levin announced on Wednesday a far-reaching program for judicial reform, with an emphasis on reining in the Supreme Court.

Levin’s plan includes changing the way judges are selected so that the Knesset members will have majority say on the Judicial Selection Committee; passing an “override clause,” a law that would give legislators the power to reverse, or “override,” the Supreme Court when it strikes down laws; abolishing the legal justification of “reasonableness” by which the court can cancel Knesset decisions; and empowering ministers to hire and fire their own legal advisers.

In an interview with Maariv released on Thursday, opposition leader Yair Lapid said that “we have to fight for the legal system. I mean, the whole essence of what a state is is that a state is a legal institution. It has a law and the Supreme Court is the interpreter of the law.”

Israel’s judicial system, he continued, “is not destroyed that quickly. We will also hold a dialogue with people from the [governing] coalition in an attempt to explain to them and talk to them about the fact that what is happening here is profoundly improper.”

National Unity Party leader Benny Gantz on Thursday called on Netanyahu to include opposition factions in the process of implementing the new government’s judicial reform.

“We are in a real emergency, and therefore I call on Prime Minister Netanyahu to make a decision: Negotiation or confrontation,” said Gantz, adding that the former would “legitimize” any changes to the legal system.

Much of the debate stems from a 1995 decision by then-Supreme Court President Aharon Barak, who announced a “constitutional revolution.” Barak based his decision on two Basic Laws (basic laws are considered to have greater legal stature than regular laws) passed in the early 1990s—Basic Law: Human Dignity and Liberty and Basic Law: Freedom of Occupation. Barak declared they were “the supreme law of the land and constitute part of Israel’s constitution.”

Polls show that the Supreme Court, once considered sacrosanct, has seen its position in the eyes of the Israeli public slide over the last decade as its detractors have criticized it for accumulating too much power, self-selecting its members and basing its decisions on a left-wing worldview that puts it at odds with the letter of the law.

Netanyahu on Sunday also denounced the “wild incitement” against Levin, saying he has been compared to Hitler, and vowed to carry on with the proposed reforms.

“Over the weekend, I saw posters that compared the justice minister to the leader of the Nazis and spoke of the Sixth Reich. This is wild incitement that passed without condemnation by the opposition or the main media outlets,” said Netanyahu.

“This must stop immediately and must be strongly condemned by everyone. A serious and substantive discussion—however pointed— must be held about the reform. We received a clear and strong mandate from the public to carry out what we promised in the [Nov. 1] election campaign, and we will do so. This is the actualization of the will of voters, and this is the essence of democracy,” he added.

Meanwhile, in interviews broadcast on Saturday night by all three major Israeli networks, former Supreme Court President Barak called on Levin to reconsider the proposals, arguing that they give too much power to the Knesset and as a result remove all recourse to protect citizens from having their rights infringed upon.

Barak called the planned reforms “a series of poison pills” and urged Israelis to resist them through all legal means.

“If putting me to death would put an end to this drastic shake-up,” Barak added, “I’d be prepared to go before a firing squad.”

The interviews were immediately followed by ones with Levin, who said Barak “does not understand the essence of democracy,” and rejected the possibility of establishing a committee including him to devise a compromise to the judicial reform plans.