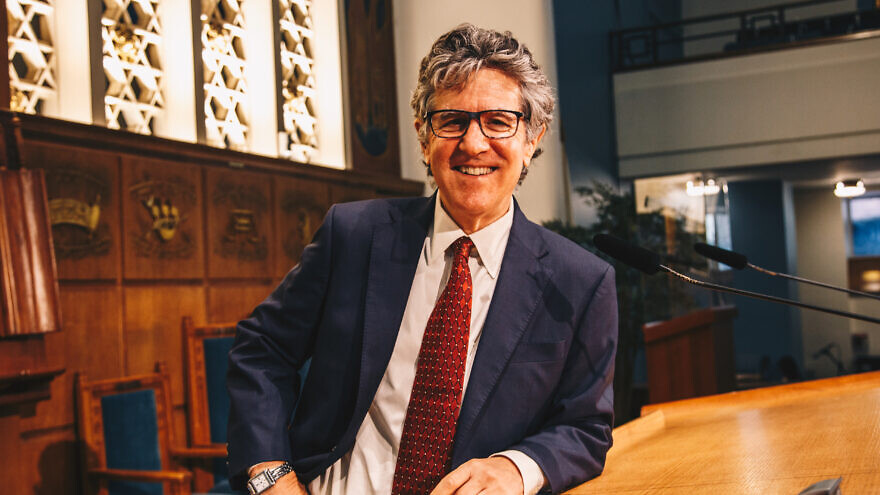 Rabbi Ammiel Hirsch of the Stephen Wise Free Synagogue in Manhattan will talk about Israel and his trip to the Ukraine/Poland border. Photo by Egar De La Vega.
Republish this article
1752 WORDS
Spread the word.
Help JNS grow!
Share now:

(September 21, 2022 / JNS) For most rabbis, the High Holidays are like their World Series. They always attract the biggest crowds, and with the pandemic appearing to be far less dangerous, synagogues are expecting to be at full capacity.

From Israel to concern over a possible Iran deal to mental health issues, what words of wisdom will these rabbis use to empower and inspire their congregants as the holidays begin on Sunday evening?

Rabbi Ammiel Hirsch of the Stephen Wise Free Synagogue on Manhattan’s Upper West Side said he will recap his trip to the Ukraine-Poland border, where his shul donated $250,000 in aid as well as supplies. He will also talk about how some don’t give Israel a fair shake.

“I always speak about Israel and this year it’s especially important,” Hirsch told JNS. “Some in the progressive or liberal camp have unfairly criticized Israel, and this is coming from my camp. So, as a progressive rabbi, I feel I have a responsibility to speak about the importance of grappling with the complicated issues of our times. There is fair and unfair criticism, and we must be accurate in what we say.”

Rabbi Diana Fersko of the Village Temple, Congregation B’nai Israel, in Greenwich Village, will also be talking about the Holy Land.

Rabbi Marcia Zimmerman of Temple Israel in Minneapolis said she often speaks about the importance of visiting Israel to correct misconceptions spread by the media. She said she may do so again this year, as she will be leading a trip to the Jewish state. In addition, the focus of one of her sermons will be mental health.

“The routine of coming to pray or other routines for many have been broken over the last few years,” Zimmerman said, mostly due to the pandemic. “While there is certainly less of a stigma than there used to be to discuss mental health issues, many people are either embarrassed or have trouble identifying what is really going on. It can range from loneliness to something more serious, and people need to know they are not alone.”

Rabbi Shmuley Boteach said there is a “pandemic of mental health challenges” that partly stems from social media. In some cases, people will consult their doctors and get medication, but in general, now is the time of year to examine one’s personal authenticity, he said.

“There are unrealistic expectations making people feel down and even depressed,” said Boteach, who will speak in Teaneck, New Jersey.

“Rosh Hashanah is about renewal and teshuvah is interpreted as repentance, but part of it is returning to the real you. Who is the real you? How do you measure yourself?” he asked. “Is it whether or not you have 100,000 followers on Instagram or made a Fortune 500 list? Or is it about good things that you are doing to impact the world in an authentic fashion? We can get a fleeting high for some things, but it is only when we are introspective and act as our true selves that we find sustained satisfaction.”

No easy answer to those who have been indoctrinated to hate

Rabbi Aaron Slonim, executive director of the Rohr Chabad Center for Jewish Student Life at Binghamton University in upstate New York, said he knows lawyers are working on cases filed by students at other colleges who’ve said they were victims of anti-Semitism. While there is no easy answer to those who have been indoctrinated to hate, he said he will speak about the need to correct a misinterpretation of the significance of being the chosen people.

“Many people think this means that Jews believe they are superior to everyone else,” said Slonim. “When Jews are asked what it means, they often don’t have the words to answer. This can reinforce the incorrect understanding that Jews think they are better than everyone and can cause feelings of negativity and resentment. We have a special mission to spread light, spread positivity and show kindness to people. If Jews walked around thinking they are superior to everyone, it would make this holy mission extremely difficult, or maybe even impossible to fulfill.”

Rabbi Shlomo Litvin is co-director of Chabad of the Bluegrass and leads the Chabad Center at the University of Kentucky. He said the group is rebuilding its facility after it burned down. The Lexington resident said he will speak about King Charles III’s ascension to the throne and the coming of the Mashiach, the Messiah.

“No one has ever waited 73 years for their crown,” Litvin said. “For the last 73 years of [Charles’] life, everything has been under strict scrutiny—who he married, where he went to school, what he wore, what he ate… He’s been following strict protocol and they said, ‘It will never come to Charles, it will come to William.’ But the fact is they were wrong. And we’ve waited a long time, but entry [for the messiah] to our palace [Temple] in Yerushalayim is coming.”

Rabbi Sharon Brous, the founding rabbi of IKAR, a congregation in Los Angeles, said that while she isn’t finished fine-tuning her sermon, she knows what her purpose is.

“We want people walking out of here feeling better and thinking more powerfully than when they walked in,” Brous said. “We will talk about a number of threats that exist that I know people may be thinking about and we’ll discuss what the Torah has to say about them and feel the power of being together.”

A message regarding the nuclear talks with Iran

Rabbi Marvin Hier, founder and CEO of the Simon Wiesenthal Center in Los Angeles, is no longer a pulpit rabbi but will be communicating a message to his members shortly before the High Holidays. It will include a message regarding the nuclear talks with Iran.

“If the greatest criminal in the history of our planet, Adolf Hitler, was alive in 2022, without a doubt he would live with the ayatollahs in Iran, who continue his legacy of lies by denying that there ever was an Auschwitz or a Treblinka,” Hier wrote to JNS by email.

“How sad that today’s leading democracies, many of them victims of Nazi Germany, as well as the United States, are willing to place the destiny of our planet in jeopardy by making a deal with the devil, whose national anthem is cheating and lying, whose raison d’être is the destruction of the Jewish state,” he continued.

He added, “How appropriate that in these High Holiday prayers, when we read ‘on Rosh Hashanah [our] destiny is inscribed, and on Yom Kippur, it is sealed,’ that we must do everything in our power to be vigilant and fight back against Hitler’s descendants whose goal is a second final solution of the Jewish people.”

Rabbi Alty Weinreb of Temple of the High Country in Boone, North Carolina, said he will speak about a need to lower the temperature of social discourse, in which many argue as if they were engaged in battle.

“Debate is not supposed to be about hate,” said Weinreb. “The whole Talmud is about debate in a civilized manner. We must be able to disagree with people and have a discourse without animosity and bitterness. There used to be debate shows on TV with respectful arguments, but unfortunately, now it’s presented like a war where you’re supposed to hurt someone with your words, and it has resulted in many emulating that in their lives.”

Rabbi David Wolpe of Sinai Temple in Los Angeles has given many sermons during his career as one of America’s most prominent rabbis. Asked what he will speak about from the pulpit, Wolpe responded: “All I can say at this point is the resilience and tragedy I saw in Africa, the solidarity I saw at the Zionist Congress [held in Basel, Switzerland last month] and the fact that these are my final holiday sermons as senior rabbi of Sinai are all playing around in my head, and I hope they will swirl into something worthwhile.”

There are plenty of movies worth citing in a High Holiday sermon, said Rabbi Herbert J. Cohen, a longtime clergyman at Congregation Beth Jacob in Atlanta. The author of Kosher Movies, who now lives in Israel, said that while it is understood that parents and teachers want to set high expectations, they should be careful not to apply too much pressure so as to allow a person to find his or her individual path. To illustrate this, he recommends watching “Dead Poets Society,” starring the late Robin Williams.

“Not every kid is going to be a doctor or a lawyer,” said Cohen. “Some may not even go to college. Parents have to recognize the nuances in raising children. It’s a message for the Yomim Tovim [Jewish holidays] because you have to look at what your kids are doing and what their needs are. You can’t just take out the old bag of tricks and think the same thing is going to work with every kid you have. It’s complicated.”

“A shul can measure itself by its income or its membership,” Wolkenfeld said. “It’s easy to focus on the things that are easy to measure. It’s harder to evaluate if it is living up to its mission. As we hope to be written into the Sefer HaChaim [the Book of Life] for that, it’s a system of measurement that’s really beyond our ability. But it matters a lot more.”