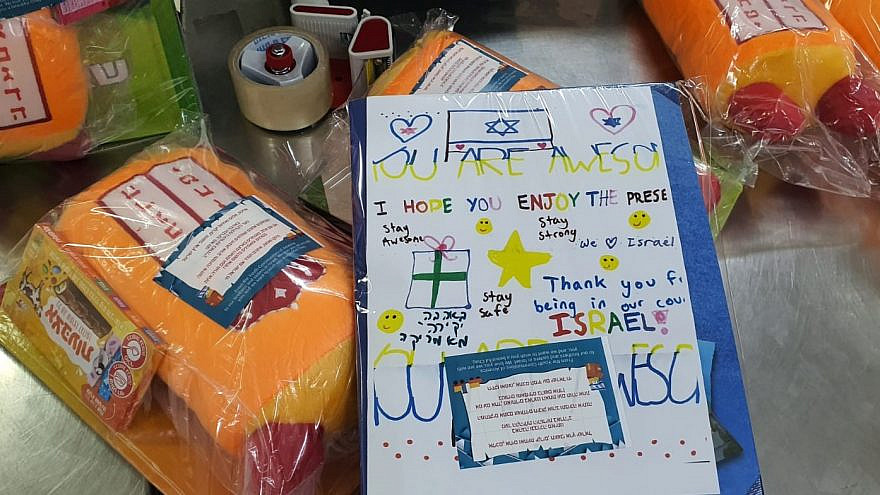 Gifts for children taking shelter from the barrage of rockets that have been fired at Israel from the Gaza Strip were assembled at the Pantry Packers Volunteer Center in Jerusalem and included handwritten notes from day-school students in the United States. Credit: Courtesy.
Spread the word.
Help JNS grow!
Share now:

(May 19, 2021 / JNS) With tens of thousands of Israeli families under attack by rocket fire from Hamas in Gaza and required to stay near the safety of the protected rooms within their homes, Colel Chabad, Israel’s oldest continuously operating charitable organization, has increased home deliveries to support the elderly in need.

While seniors usually get meals at one of 22 soup kitchens around the country, the constant threat of attacks has forced Colel Chabad to temporarily shut these facilities and deliver to homes in some of the hardest-hit areas, including Ashdod, Lod, Dimona, Tzfat and Jerusalem.

The organization sent 25,000 meals to more than 5,000 elders over the Shavuot weekend.

At the same time, the Youth Department at Congregation Bnei Yeshurun in Teaneck, N.J., decided to do something to help kids forced to spend hours in protected spaces.

“We called upon the community to help raise money to send toys, educational books and comfort food to bomb shelters across southern Israel,” said Rivka Szafranski, who together with her husband, Yehoshua, runs the youth department. “We decided to team up with Colel Chabad, which already has the infrastructure and volunteer system to package and distribute gifts to these children who are suffering during these traumatic times.”

“We’ve now raised more than $40,000 with 30-plus other communities involved in donating gift packages for Israeli children in the hardest-hit areas,” said Doron Katz from Teaneck.

In the initial round of distribution, packages were delivered for the Shavuot holiday to the young children in Yavne, Ashdod and Sderot—cities that have been under attack in the latest round of violence in Israel.

The packages were prepared under the guidance of professional staff to support the emotional well-being of children. The age-appropriate gifts included books about emotions and challenges designed to help kids throughout a scary, confusing time. “It warms our heart to feel your love and caring,” said Miriam Blau, an educational counselor at the Maonot Chaya Childcare Centers in Israel. “It means so much to these children to know that there are sisters and brothers on the other side of the world that think of them and care for them.”

“Thousands of families are living in very tense and scary times, having to drop everything and run to the nearest shelter, sometimes multiple times a day,” said Itzik Marton of Colel Chabad. “The tremendous response from Jewish youth in the United States to this initiative really shows how Kol Yisrael Ereivim Ze Ba’Zeh—‘We are all connected.’ ”

The gifts were assembled at the Pantry Packers Volunteer Center in Jerusalem under the direction of Rabbi Menachem Traxler. They included handwritten notes from day-school students from Yeshivat Noam in New Jersey, as well as other participating Jewish communities in the United States.

“To see this project grow so quickly and continue to attract the involvement among the Jewish children of the Diaspora is inspiring,” said the director of Colel Chabad, Rabbi Sholom Duchman. “The children of Israel are never alone.”