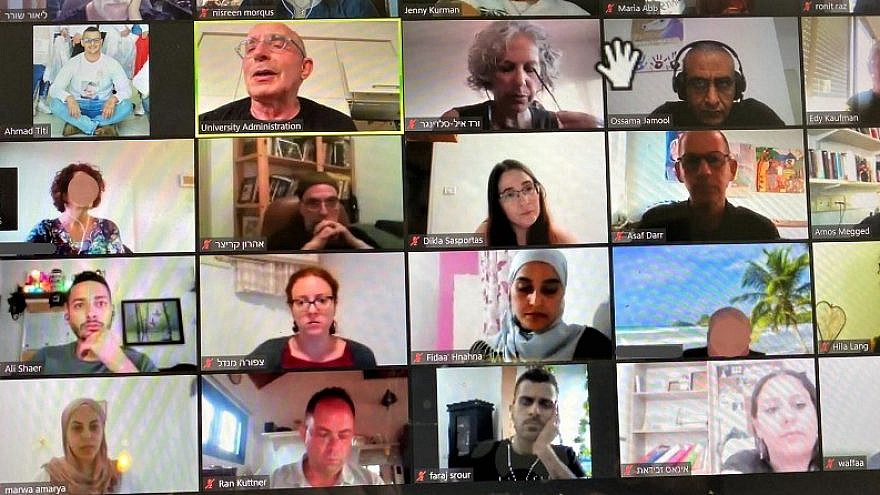 (May 24, 2021 / JNS) In light of the recent wave of violence between Arabs and Jews in Israel, the University of Haifa held a roundtable discussion on May 20 following the ceasefire with Hamas in the Gaza Strip, where students, faculty, administrative staff and the general public were able to discuss the impacts of increased tensions and attempt to find solutions to restore harmony.

More than 120 Jews and Arabs of various backgrounds attended a Zoom meeting hosted by the Jewish-Arab Community Leadership Program, which fosters multicultural encounters among students to create leadership groups within the university and local community.

“As a multicultural community, we wanted to offer a safe space for Jews and Arabs to talk about the difficult issues surrounding the conflict,” said dean of students Professor Jenny Kurman. “From Orthodox Jews to Ethiopians, Druze and Arabs, participants talked about their frustrations and worries, but also of hope for better times ahead. Importantly, they were able to see and understand perspectives from one another, even during these tense times.”

Students reflected on the open discussions with their Jewish and Arab peers, speaking about how such interaction and dialogue is the only way to move forward.

“The encounter created hope in my heart,” said Ali Sha’er, an Arab undergraduate student studying information systems. “I saw Jewish and Arab people with a strong will to come together and explain what they’re going through with the aim and hope that it will strengthen empathy between Arabs and Jews. I was happy that people listened to me, and even more that by the end of the discussion, there was an aspiration for coexistence from us all and a better understanding of the other side.”

“It has highlighted that each other’s point of view is shrouded in misconception,” continued Sha’er. “More encounters like this one are needed to spread comradery and hope.”

Discussing the political motives behind the ongoing conflict, Naama Golan, a graduate Jewish student studying art therapy, said “I liked being able to take part in the dialogue and sharing of different ways to deal with hostility. I believe there is an indented political direction to keep the conflict alive by creating two opposing sides. The encounter was important, and I look forward to more. The only way to solve the problem is to create conversation, to know each other’s narratives deeply, and to create joined radical activism of Jews and Arabs, secular and Orthodox, men and women, etc.”

Expressing her fears following the violence, Marwa Amarya, an Arab undergraduate student in the Department of Multidisciplinary Studies, said “I shared my feelings and worries of going outside with an Islamic headcover. It helped me to listen to others’ experiences of fear, and one of the participants suggested it may relate to the media’s emphasis on violent events. The dialogue helped me to calm down, cope and leave the house. The encounter was important and meaningful.”

With Arab students comprising some 30 percent of the student body—more than the average among Israeli academic institutions and the Arab share of the nation’s total population—the university’s community of co-existence has for the past 50 years served as a model for the region.