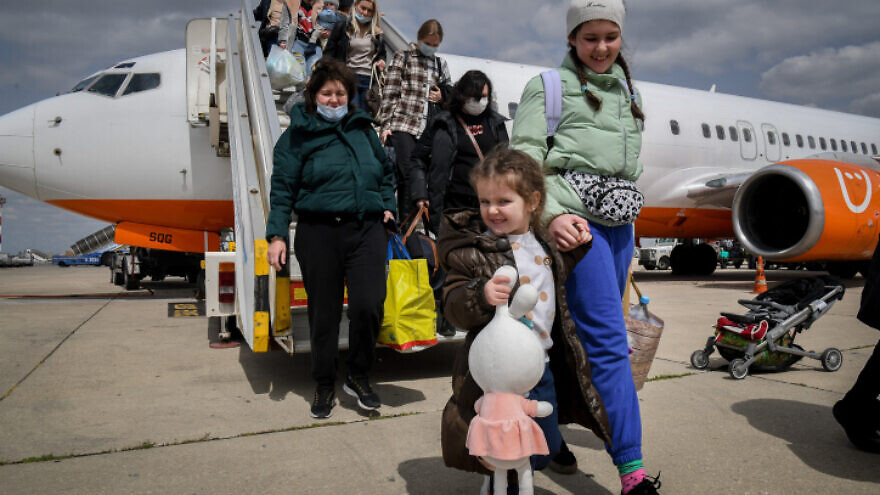 (April 11, 2022 / JNS) The Ukraine war has led to a wave of aliyah from the war-torn country, along with a wave of criticism as organizations managing that immigration came under fire for not working faster. On March 18, the Israeli daily Israel Hayom pointed out that it was easier to enter Israel as a non-Jewish refugee than as a Jewish immigrant. A week later and the situation had reversed—more immigrants than refugees were entering the country, and the organizations handling the situation tell JNS that they have made the necessary adjustments.

At the start of the war, Israelis heard reports of Ukrainian Jews stuck in hotels or at makeshift centers in countries bordering Ukraine. The crux of the problem: aliyah, or immigration to Israel, is normally a process that takes months. Aliyah organizations weren’t prepared for the sudden surge in applicants.

“Last year, in 2021, there were approximately 29,000 people who made aliyah from around the world. Right now, around 10,000 have come to Israel just from Ukraine. We anticipate it going up to 15,000. So we’re already at half the number [of last year’s total],” Dan Elbaum, the Jewish Agency for Israel’s head for North America and president and CEO of Jewish Agency International Development (JAID), tells JNS.

To speed up the process, the Jewish Agency—the main address for immigrants seeking to go to Israel—launched its “Aliyah Express” program on March 21. Basic paperwork is done on-site in Europe. Once in Israel, the rest of the immigration process takes place at a more leisurely pace.

The Jewish Agency, which is housing immigrants in four countries—Poland, Hungary, Moldova and Romania—told JNS the program is bearing fruit. A few weeks ago, 5,000 immigrants were waiting in hotels to reach Israel. That number has since dropped to 2,000 with the average wait time reduced to a few days to a week.

It is coordinating the activities of the many groups helping immigrants, saying that since the onset of hostilities on Feb. 24, it has organized 400 buses to rescue Jews from Ukraine and bring them across the border to neighboring countries. The hotline it set up immediately after the war started has fielded some 30,000 calls from Ukrainians seeking information about leaving the country.

Elbaum, who recently returned from Europe as part of a delegation, said what most distinguishes the situation is that it’s made up of mainly women and children. Men over the age of 18 are in most circumstances compelled to stay behind for military service. “We’re talking to foundations and donors about whether we should treat this situation differently because we’re dealing with single mothers who’ve lost their support. It’s not unheard of, but not to this degree,” he says.

Elbaum accompanied 144 immigrants on an aliyah flight from Europe to Israel before returning to the United States. He says the impression he had was that while they were happy to escape the immediate danger, “there was no feeling of resolution. There was this notion that even if these hostilities subside, it can start up again in six months.”

The Jewish Agency handles aliyah throughout most of the world, but when it comes to former Soviet states, an Israeli governmental body, Nativ, makes the initial determination as to who is eligible to immigrate under Israel’s Law of Return, which requires an immigrant have at least one Jewish grandparent. Nativ is working in hand in glove with the Jewish Agency in the current crisis.

‘Many already had family in Israel’

Yulia Dor, deputy director general of Nativ, tells JNS, “When the war started, we had to switch to a state of emergency. There was criticism. Perhaps in those early days, when we were inundated with huge numbers of immigrant inquiries, that criticism was justified.”

She notes that within the first week of the war, Nativ had set up three bases of operation in three countries it had never worked in before: Poland, Hungary and Romania. “Within the last six weeks, nearly 11,000 immigrants have passed through Nativ,” she says.

Dor said the biggest challenge was making Nativ a rapid-response organization while still maintaining a high level of service and precision. “We are defined as the gatekeepers on behalf of the State of Israel, and we are committed to an accurate check that will serve those Jewish refugees not only as citizens, but also if they appear later in rabbinical courts or in other frameworks where an eligibility check is required. We want them to rest assured that the initial decision was the right one,” she explains.

What made it possible for Nativ to hasten the process was 30 years working in post-Soviet countries. “Many of those requesting aliyah already had family in Israel. Even if they had to flee without documents, if they had someone in Israel, we knew they’d passed through Nativ at some point and the documents had already been given to the organization,” she says.

Dor estimates that Israel could see as a many as 50,000 immigrants from Ukraine “if we view what started on February 24 as a years’ long process, not an event that will end in a few months.”

Currently, every Nativ consul handles about 50 cases a day—“50 people who receive a positive answer or negative answer.” On average, only 10% of applicants are refused.

Dor says the organization is working to increase its numbers and plans to implement a training course for new workers immediately after Passover. “We have already added to our group of 30 professionals who have consular certification, and 20 who work both in Israel and abroad. We will add another 20, so we are ultimately due to double our numbers,” she says.

She also notes that 12 locations in Israel help immigrants, as many arrive under their own steam. At each of the locations sit representatives from three separate government bodies, an Israeli first—“Nativ, which establishes entitlement; the Ministry of Interior, which immediately prints an ID card; and the Ministry of Aliyah and Integration, which then provides immigration benefits. It’s a one-stop shop.”

Elbaum adds that the new immigrants will benefit also from the large Russian-speaking population already in the country. “It won’t be like it was for olim after the fall of the Soviet Union,” he says.

When people ask him how they can help, he answers: “If you don’t speak Russian, and you’re not willing to spend a few weeks there or have a special medical skill, the best way to help is to raise money for the effort. What most of us can do is just really support the effort to raise awareness and funds.”