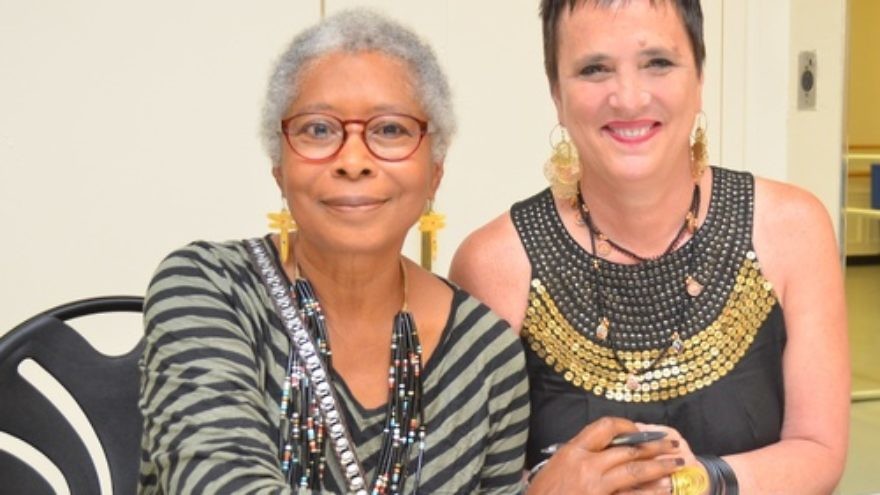 (June 4, 2013 / JNS) The day before music star Alicia Keys rebuffed the appeals of author Alice Walker and Pink Floyd band member Rogers Waters to cancel her upcoming performance in Israel, Walker herself benefited from the Jewish community, which gave her a platform to promote her work.

On May 30, the 92nd Street Y in New York City hosted Walker—an activist for the anti-Israel boycott, divestment and sanctions (BDS) movement—for a book-signing for her new collection of poetry, The World Will Follow Joy, and her new book of meditations, The Cushion in the Road.

Before the book signing, the 92Y stage was the setting for a dialogue between Walker and The Vagina Monologues playwright Eve Ensler for a dialogue that was adoring—each singing the other’s praises.

Outside the event on Lexington Avenue in Manhattan, the response of the Jewish community to the use of the 92Y as a venue for an anti-Zionist proved pale. A small, noisy group of perhaps 20 people—mostly elderly—demonstrated against the appearance of Walker.

Lannie Grauman, one of the few younger protesters, told JNS.org she was raising her voice to make clear that a Jewish organization should not provide a venue for an avowed hater of Israel. “Walker spreads lies about Israel,” she said.

A police presence would arrive when a confrontation between a screaming protestor and a Walker supporter threatened to erupt into physical conflict. Security was not only tight—it was adamant. Even people coming into the 92Y lobby were interrogated.

Della Johnson awaited a friend on the landing outside the entry doors. Johnson told JNS.org she “simply wanted to see [Walker] in person,” and was not keeping up with Walker’s political opinions.

Those opinions—including Walker’s positions concerning Israel, her support of the BDS movement, or her participation in the attempts to break Israel’s legal blockage of Gaza— found no expression during her time on stage. The love-fest began with Ensler’s pronouncement that “it feels right,” as the two clasped hands. “I honor this woman,” Ensler said.

Walker and Ensler conducted a polite, philosophical dialogue about “humanity,” with frequent expressions of high regard for each other’s work.

The few questions allowed from the audience were submitted in writing, on cards supplied and collected by ushers. The questions were thoroughly filtered—any possibility of Walker being challenged on Israel was eliminated.

When the staged segment was finished, the two authors sat together. “This is a book signing,” announced the 92Y’s director of security.

“If you don’t have a book you have to leave,” he added.

There were no exceptions. Lorri Schwartz, who had been invited to attend by an Ensler associate, is a therapist who spends her professional life treating victims of rape, abuse and suffering.  She was summarily escorted out of the book-signing line—forced to purchase a book in order to have a moment of conversation with Ensler.

After each purchaser of an Ensler or Walker book had received a signature, Walker agreed to answer several questions from JNS.org. Asked why she refused to allow Israeli publisher Yediot Books to translate The Color Purple into Hebrew last year, Walker responded, “It was translated [into Hebrew] before there was a boycott [of Israel]. So it’s already there.”

Explaining her rationale behind boycotting Israel, Walker told JNS.org that in her experience, “boycotts are ideal for such situations in which you refuse to employ violence.”

Before Walker could respond to the point that Gaza City is highly developed and residents there enjoy a comfortable lifestyle, Beverly Greenfield, director of public and media relations for the 92Y, attempted to interrupt the conversation.

“I would stop my government from giving the Israeli government so much money,” she said. “We need the money here. Our schools are a mess—they’re closing them down. Our hospitals are terrible. You know, the poor communities are in such suffering. We need the money that we have been giving to Israel all these years. It’s not right. There’s no way you can make it right.”

As Walker continued to express her views, the 92Y’s Greenfeld, who monitored the entire interview, again interrupted. “This is not the place for this,” she said, before shutting down the interview.

If the 92Y believed in an open dialogue on stage, why should its communications officer forbid the continuation of that dialogue off stage? Alice Walker is a public figure, and she has made her anti-Israel position clear. Why, then, was she stopped while stating her views in a one-on-one interview at a premier institution of the Jewish community like the 92Y? Why is the 92Y afraid to have her state her position?

Jonathon Tobin wrote for Commentary that by “inviting Walker, whose opinions and actions about Israel are not exactly a secret, the Y is signaling that it and its members do not consider advocacy for the anti-Israel BDS movement to be a disqualifying factor when it comes to the people they invite to their hall.”

Concerning Walker’s comments before the interview with JNS.org was shut down, one might wonder whether her knowledge of foreign military aid spending policy is so minimal that she does not know that the majority of such funds are, by mandate, spent in the U.S., providing jobs and revenue for Americans. Walker should also be aware that school funding generally comes from local or state sources.

When an assumed intellectual, a so-called humanistic thinker like Walker, eliminates facts as a basis for her positions, a dangerous precedent is set.

Alicia Keys, upon rejecting Walker’s calls to cancel her July 4 concert in Israel, told the New York Times, “I look forward to my first visit to Israel. Music is a universal language that is meant to unify audiences in peace and love, and that is the spirit of our show.”

Walker herself said on stage at the 92Y, “You have to want to be free—it’s hard work. You have to love people.”

Heed your own advice, Ms. Walker.