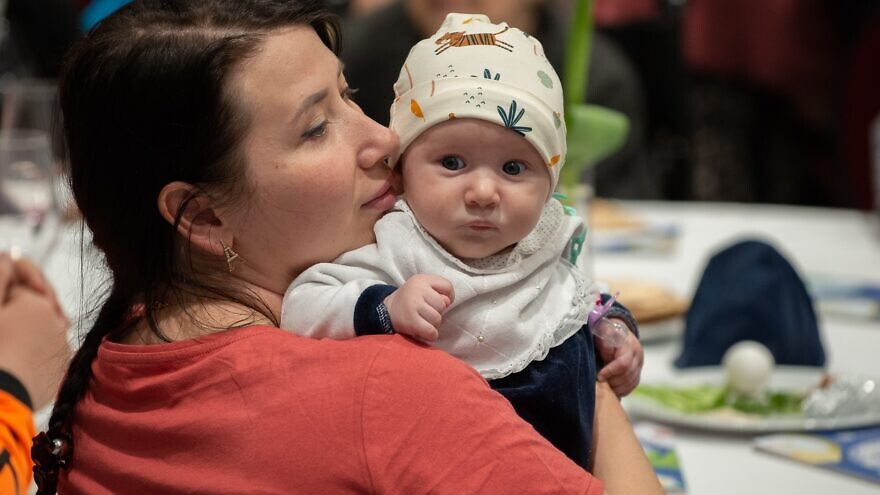 (May 9, 2022 / JNS) The White House is testing a unique solution to the growing Ukraine refugee crisis. The American Jewish community is testing its response.

The administration of U.S. President Joe Biden has launched a direct sponsorship program for Ukrainian refugees called Uniting for Ukraine, which will serve as a major piece of the president’s pledge to accept up to 100,000 refugees in the United States. A new online portal started accepting applications, where individual Americans, as well as private and public organizations, can apply to financially sponsor a Ukrainian for travel from Europe.

The program, known as humanitarian parole, puts the onus on those wishing to help, including synagogues and Jewish organizations, to match waiting refugees with sponsors, and with government benefits lacking—to help cover the costs of refugee absorption. Parolees are not admitted with refugee status, so they will not have access to the same resettlement services that refugees can get. An act by Congress would be required to authorize Ukrainian parolees access to resettlement services and support.

“Most sponsors are likely to need help for two years or more. Essential support comes in a great variety of forms—financial, finding community contacts, doing research and finding connections and links to services, furnishing apartments. So now is the time to figure out who you can help, who is connected to real estate, access to low-income housing, do you work for a law firm that will provide pro bono support, can your synagogue coalesce around a sponsor to connect those arriving to support in your community,” Merrill Zack, HIAS vice president for Community Engagement., explained in a recent informational webinar as the new rules were announced.

HIAS is the lead settlement agency handling Ukraine refugees. With Jewish roots, HIAS has a long history in Ukraine, having worked to resettle Jews after World War II and the end of the former Soviet Union.

In order to be eligible for the expedited process, Ukrainians must have lived in their home country as of Feb. 11.

Ukrainians who are selected to travel to the United States under the initiative will be granted humanitarian parole, allowing them to bypass the visa and refugee programs, which typically take years to complete. While it does not offer permanent status, parole would allow Ukrainians to live and work in America for two years. U.S. individuals or organizations seeking to sponsor Ukrainians overseas will need to file affidavits of financial support and undergo background checks. The U.S. Department of Homeland Security will then determine whether they qualify to be sponsors. If the sponsorship is approved, the Ukrainians identified by U.S. sponsors will need to undergo security screenings overseas to ensure they will not pose a security or public safety risk to the United States. They will also be required to be vaccinated against communicable diseases.

While some parts of the process still remain hazy, enough information is now available for the Jewish community to spring into action.

‘Funding to do this for the long haul’

“We’re pleased to have a process identified now, and we’re learning more about it,” Elana Broitman, senior vice president of public affairs at Jewish Federations of North America (JFNA), told JNS. “It is a bit more complicated than it could have been, I think. And the people coming in through humanitarian parole will not have benefits other than work visas and for work authorization, and that puts a great strain on the community, on any community.”

Broitman herself was a refugee from Ukraine in the 1970s and was resettled with the help of American Jewish groups.

“This is what the Jewish Federation system is built for. We have been building this infrastructure since the 1970s when my family came, and then we honed it again in the late 1980s and early ’90s,” she said. “And then, just last fall, we used this entire system to bring in Afghans, who fled Afghanistan after the U.S. left. This is what our philanthropists know needs to be supported, what the Federations know needs to be supported, what the Jewish Family Service agencies and the Jewish Community Centers know how to do.”

While some groups, Jewish and others, are advocating for Congress to codify some refugee benefits into law, for now, funding will be a major concern for sponsors, especially for a conflict that has taken on an intractable dimension. The Jewish Federations have thus far raised more than $50 million in its refugee support efforts.

“You know, people have been remarkable. But one of the reasons that we have been working very hard on the philanthropic campaign is to make sure that we’ve got the funding to do this for the long haul,” said Broitman. “Military experts have been saying the war itself is going to continue, unfortunately. So we may see more people leave, more people in need of resettlement, whether it’s in Israel, in the U.S.—both places where we’re helping, along with Poland, Romania and other settlement locations.” 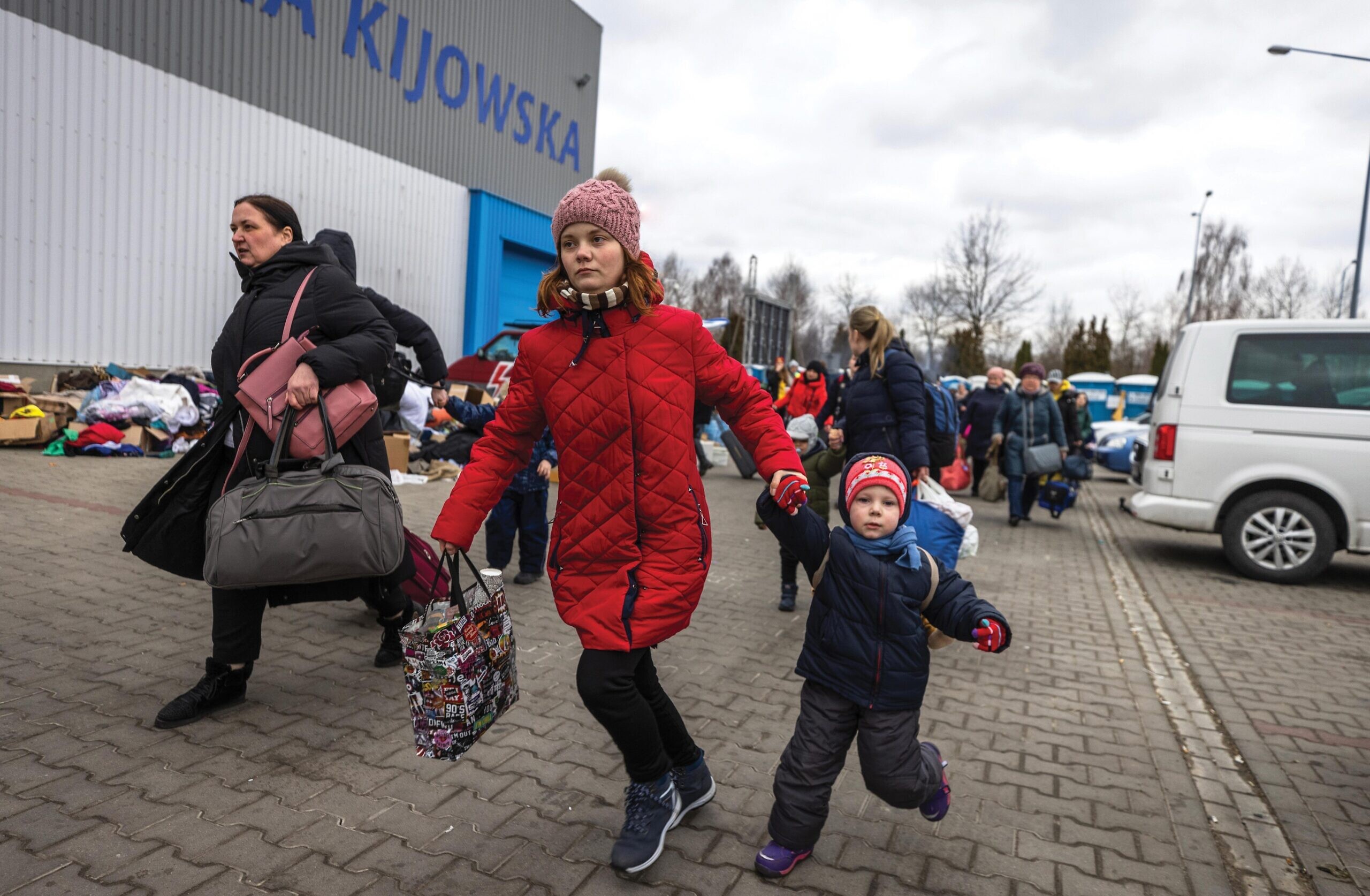 A mother and her child flee the Russian invasion of Ukraine at a temporary accommodation center in Korczowa, Poland. Photo by Olivier Fitoussi/Flash90.

‘Everybody’s trying to help at once’

For Jewish Ukrainians fleeing the war, the process now takes on an added unclear component. A number of refugees could be accepted into the United States through a separate vehicle called the Lautenberg Program, a family reunification program that allows certain individuals legally residing in America to bring their family members in through the U.S. Refugee Admissions Program.

First enacted in 1990 to facilitate the resettlement of Jews from the former Soviet Union, it was expanded to include persecuted religious minorities in other countries, including Jews, evangelical Christians, Jehovah’s Witnesses, Ukrainian Greek Catholics and members of the Ukrainian Autocephalous Orthodox Church. Applicants must have immediate relatives in the United States. It is estimated that some 17,000 Lautenberg applications are already in the pipeline.

Additionally, there is no confirmation about the implications for Lautenberg applicants who decide to enter through the parole program rather than wait for Lautenberg processing. HIAS says it is possible that people who come through parole will lose their eligibility for refugee status, something it says it is advocating against.

In the meantime, the American Jewish community is working with what it has—using its organizational structure, philanthropic efforts, and in Broitman’s case, personal experience as it moves forward. Broitman cited the need for coordination amongst various Jewish agencies, pointing, for example, to JFNA’s partnership with the JDC or the Joint (the American Jewish Joint Distribution Committee) in setting up a volunteer hub.

“I viscerally understand what these families are going through and also having been resettled, I viscerally know what happens. You get off a plane, and then what? What do you need? And who does it? I did refugee policy for a very long time in Congress. I was doing a lot of immigration work for the UJA Federation in New York. And, so I’ve also seen this in different contexts,” said Broitman. “What happens on the ground is this sort of need for coordination of all of this, because everybody’s trying to help at once.”