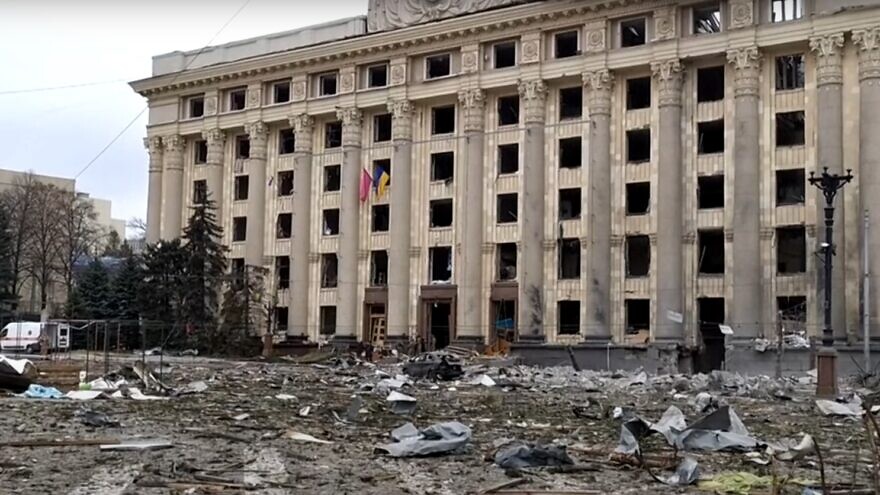 (March 1, 2022 / JNS) A Chabad emissary had just finished giving an online update on life in Kharkiv, Ukraine, on Monday night when an air-raid siren went off and Rabbi Mendel Moskovitz abruptly ended his talk to take shelter.

“That was real. That was very real,” said Rabbi Moshe Hauser, executive vice president of the Orthodox Union, which was hosting the briefing on the crisis in Ukraine and its impact on the Jewish community there.

During the hourlong video update, O.U. leaders heard from representatives of the Tikvah orphanage and Yad Yisroel, both of which helped evacuate their constituents and community members from cities in Ukraine. The representatives shared the harrowing trips people took to safety — normally short rides became circuitous journeys as they found roads closed, and long waits at checkpoints. They said one of their main focuses now is to ensure that all who are evacuated have what they need be it material items or emotional aid.

“We are working on two fronts,” said Rabbi Moshe Fhima of Yad Yisroel, who lives in Pinsk, Belarus. “We are working to make sure all who have relocated to Pinsk have what they need … and working to bring more people out.”

He noted that on Monday they had managed to get 59 people out of Kyiv, and were planning to get a few more people, including an elderly woman, out on Tuesday.

For those who remain in Ukraine though, life has become unimaginable.

Speaking from the basement of his synagogue, Rabbi Yisroel Silverstein of Chernihiv said that “we are literally under fire, literally surrounded by Russian troops. It’s impossible to move in and out of the cities. We have a friend who has been trying to bring in medical supplies for two days. He has not been successful.” 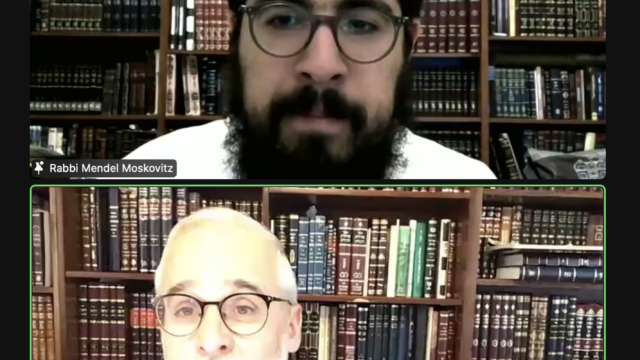 About 40 people are seeking shelter in the synagogue and more are trickling in “we are taking in everyone who comes,” said Silverstein. “We have a family in the basement whose youngest child has special needs and had spinal surgery three weeks ago. Thankfully, today, we were able to find a few more heaters to make it warmer.”

He added, “The biggest issue is the day after. People are running out of food. We are looking for food supplies in the city.” He said that a nearby farm is throwing out seven tons of milk each day because there is no way to get it to those who need it.

In Sumy, near Kharkiv, and some 30 kilometers (19 miles) from the Russian border, food is also becoming scarce. In a story that in other times might have been humorous, Rabbi Yechiel Shlomo Levitansky shared a story of events from earlier in the day.

He said a non-Jewish worker at Chabad told him that the Jewish people more than 3,000 years ago were planning how to survive for a long time, and that’s when they made matzah. “He said to me, ‘If we can find some matzah, we can feed people.’ That gave me the idea. I went into our garage where we keep all different kinds of stuff and found a few big boxes of matzah. We pulled them out and gave it out.”

“But we are pulling at strings,” he said. “Time is working against us. Today the bank system was working so I could get money and buy things even at high prices. I am hoping it will work again tomorrow.”

Levitansky continued, “People did not believe in their wildest dreams that such a thing would happen. That in 2022, we are going to talk about a full invasion and all-out bombardment of cities. This is literally coming out of 1941. this is just incredible bombardment from land and sea without any targets. On Wednesday night we had a women’s class for 30 people and the thought of leaving because of an imminent attack was not even a discussion. On Thursday morning we woke up to this.

“We are trying to do as much as we can to keep our community together and give them encouragement. I’m not a political analyst or a military expert, but I understand what’s going on in Ukraine is” a great miracle from G-d.”

In Kharkiv, prior to needing to seek shelter, Moskovitz said he is also doing what he can to keep people in his community fed. “We are giving out a lot of food. Over 100 people are in the shul … we are feeding everyone, and we are sending food packages to whoever we can.”

“The only thing we can do now,” he said, “is help the people in Kharkiv.”