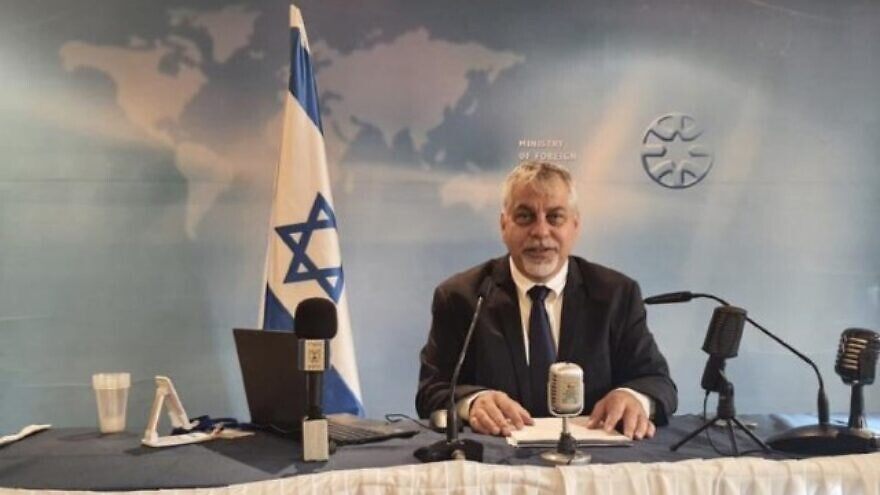 (August 24, 2022 / Israel Hayom) On the evening of the third day of “Operation Breaking Dawn,” an extensive Israeli counterterrorism campaign against the Palestinian Islamic Jihad terrorist group in the Gaza Strip, reports of a fatal attack in the Jabalya refugee camp began to appear on Palestinian social media. The reports were soon followed by gruesome pictures of the incident, including of the bodies of five children allegedly killed in the blast.

“We immediately understood that there was an emergency here that could potentially become a public diplomacy disaster, which would have an impact on the course of the operation [as well as] a political impact,” said Lior Haiat, head of the National Public Diplomacy Directorate at the Israeli Prime Minister’s Office.

“We quickly contacted IDF Spokesperson [Brig. Gen. Ronen Manelis], the [Israel Security Agency] and [IDF] Southern Command officials to understand exactly what happened, and created a message that consisted of two parts: clarifying the fact that Israel was not responsible for the incident, and presenting evidence that Islamic Jihad was to blame,” he explained.

This was the first major public diplomacy crisis for the former Foreign Ministry spokesman as head of the Public Diplomacy Directorate. Throughout his extensive career, Haiat, 48, has also held, among other roles, those of spokesperson for the Israeli embassy in Argentina, department director of Mexico, Central America and the Caribbean Islands at the Foreign Ministry, consul general to Alabama, Mississippi, Florida and Puerto Rico, and later Miami.

In an interview with Israel Hayom, he recounted how while the IDF was fighting terrorists in Gaza, his directorate was fighting disinformation—a battle he views as no less crucial.

“Within a very short time from the beginning of the incident in Jabalya, we had enough information to issue [an unequivocal] statement … that the IDF did not attack in the area at that time, adding that it was a failed [rocket] launch by the Palestinian Islamic Jihad,” he said.

“The pressure in such cases is always between the necessity to react at record speed and the need to be accurate,” he added.

Israeli Prime Minister Yair Lapid decided that the Jabalya event justified excusing a minister—Yehiel “Chili” Tropper—from an ongoing Cabinet meeting so that he could stand in front of the cameras and get the message out, said Haiat.

“We immediately organized a conference call with the participation of Tropper, officials from the Southern Command and myself, and formulated the message precisely, including to foreign media outlets. We sent the message to all the journalists and all our representatives in the world, and almost immediately saw a change in the narrative,” said Haiat.

While other incidents that occurred during the three-day operation were often not as clear-cut, clearly establishing that PIJ rockets were harming Gaza civilians affected broader perceptions of the conflict, he explained.

“After the incident in Jabalya, in which we were able to determine very quickly and clearly that it [had not been] an IDF hit, there were other incidents on Sunday, in which the initial information from the field was less clear and it was more difficult to identify with certainty a failed [PIJ] launch. However, the fact that the day before that we had worked quickly and well-established the perception in the media and in public opinion that the Islamic Jihad rockets were harming Palestinians, this time there was no rush to blame Israel before the facts became clear, unlike similar cases in the past,” he said.

Working with and through the IDF spokesperson, the Public Diplomacy Directorate made the fact that PIJ harms Palestinians one of its main messages, thoroughly documenting other failed PIJ launches.

The Jabalya incident is just one example of the importance of the work of the Directorate, which was established in 2007 after the Second Lebanon War. Its purpose is to coordinate between various officials and entities—Foreign Ministry, IDF Spokesperson’s Unit, ministries, opinion leaders and others—to speedily create a uniform, coherent and reliable message as Israel’s narrative in the media and public discourse.

“For years, the directorate did not get the recognition it deserved. I found great employees there. My predecessor in the position, Elad Tene, did a very good job at the beginning of the ‘resuscitation’ of this entity, and I intend to continue in the same direction,” said Haiat.

Q: What does the unit’s work actually look like when there is a military operation?

A: We gathered for “situation overview” meetings on Zoom with representatives of official public diplomacy entities, such as the IDF Spokesperson’s Unit, Foreign Ministry, etc., each of whom gave an up-to-date picture of what was happening…. These meetings resulted in a unified message for all of Israel’s public diplomacy representatives: ministers, heads of government ministries, ambassadors abroad and, of course, spokespeople.

In an event like “Breaking Dawn,” the IDF spokesperson has a particularly central role for us—he is the one that feeds us and all the other entities with information from the field. Moreover, we constantly received information from our missions abroad and the media and used it to build a situational picture of how high up the event is on the world’s agenda.

I worked individually, one on one, with the IDF spokesperson, the Shin Bet [Israel Security Agency] spokesperson, the head of the Foreign Ministry’s Public Diplomacy Division (who also serves as the ministry’s spokesperson) as well as the spokesperson of the Coordinator of Government Activities in the Territories, a crucial unit in this event, because part of the negotiations with the Egyptian mediators were conducted through him. We also constantly kept our finger on the pulse regarding the humanitarian situation in Gaza in everything related to food, fuel, electricity and the like.

Moreover, we closed off the Kerem Shalom border crossing and stopped exports from Gaza, and agricultural goods destined mainly for Judea and Samaria were stuck in the strip. Through the Palestinian Authority, the Foreign Ministry and the IDF’s Arabic-language spokesman [Avichay Adraee], we conveyed to the public in Gaza the message that the Islamic Jihad was responsible for this economic damage, too.

Q: Do you and the prime minister, who appointed you, work closely on a day-to-day basis?

A: Until about a year and two months ago, we never met, except for one meeting he had as finance minister with the president of Catalonia, to which I was invited since I had just returned from the mission in Spain. [Haiat served as the spokesperson and public diplomacy officer at the Embassy of Israel to Spain from 2009-2013.]

When Lapid became foreign minister, I met with him as required, a few days after taking office, to present the work between the Foreign Ministry and our unit, which work closely together…. About a month and a half ago, when Lapid was appointed prime minister, he asked me to join him as head of the National Public Diplomacy Directorate. I learned very early in my life that you don’t say “no” to a prime minister. This is a great challenge and a huge professional opportunity for me: throughout my career at the Foreign Ministry, I thought that my dream job was to be its spokesperson, and then I discovered that [this was] my dream.

Q: As someone who served in the U.S., what would you say is American support for Israel like in 2022?

A: According to the data we have, the overwhelming majority of Americans support Israel. Even among the Democrats, there is a majority of more than 50% who support Israel, but it is less so with certain age and other groups in the U.S. However, it is completely fixable, and we do it all the time. One of the biggest tests of support for Israel in the U.S. recently was the vote in Congress on renewing the Iron Dome funding, worth a billion dollars, after “Operation Guardian of the Walls.” When it really mattered, over 94% of the legislators voted in favor of this move. These are crazy percentages.

Most Americans view Israel as a valuable ally and a friend, who is on America’s side—which doesn’t mean there’s no room for growth. Not all of the U.S. supports Israel, but based on polls that we’ve conducted, over 70% do, a number that has stayed consistent over the years. These polls also show that support for Israel among young Americans has lessened, but the overall percentage remains consistent because as they get older, they are more likely to come to support Israel.