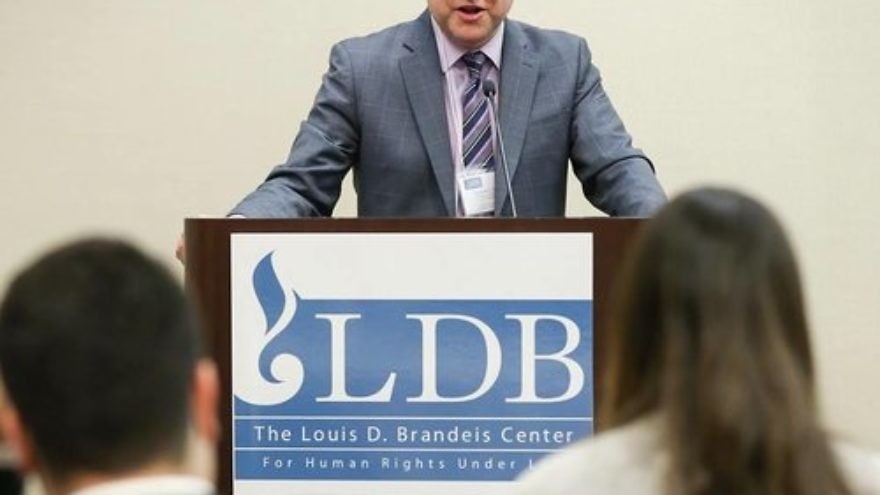 (November 30, 2017 / JNS) WASHINGTON—Leaders of major American Jewish organizations are rallying around Kenneth L. Marcus, the nominee for assistant secretary of education for civil rights, as pro-Palestinian groups denounce him for opposing the BDS movement.

Marcus, an attorney, served in the Department of Education’s civil rights division and then was staff director of the U.S. Commission on Civil Rights, before founding the Washington, D.C.-based Louis D. Brandeis Center for Human Rights Under Law in 2011.

The U.S. Campaign for Palestinian Rights is mobilizing its members against the nomination, arguing that Marcus’s efforts against BDS activity on college campuses were intended to “repress college students from organizing for Palestinian rights.”

The anti-Zionist group Jewish Voice for Peace (JVP) recently announced that “over 100 faculty members” at unnamed universities had signed their petition against the Marcus nomination. The petition claimed that because of Marcus’s anti-BDS efforts, “students and faculty [on unidentified campuses] fear studying Palestinian history or advocating for Palestinian rights.” But JVP officials have not responded to multiple requests from JNS.org for a list of the alleged signatories.

A number of Jewish organizations this week endorsed Marcus.

“B’nai B’rith strongly supports the nomination,” the group’s director of legislative affairs, Eric Fusfield, told JNS.org. “Kenneth Marcus has been a champion of civil rights, especially combating anti-Semitism on college campuses. He understands this pervasive social problem in all its manifestations.”

Fusfield added, “As someone who has worked with Ken on various projects for more than eight years, I can say that the federal government will be well served by having him in a key civil rights position.”

The American Jewish Committee (AJC) described Marcus in a recent tweet as “a good choice—knowledgeable about and committed to the mission of the office.”

“Whenever I’ve heard Ken speak, he’s been focused on antisemitism or opposition to BDS,” Stern told JNS.org. “I’ve never heard him say anything remotely close to being anti-Palestinian. It seems as if these groups are saying that anyone who opposes their boycott of Israel is unqualified for office. The American Jewish Committee does not agree with that line of thinking, and we are confident that the U.S. Senate won’t, either [when it considers the nominee].”

“For years, anti-Israel groups have had virtually a free ride to promote BDS, spread anti-Israel libels, and intimidate Jewish students, without any fear of consequences,” said Rabbi Abraham Cooper, associate dean of the Simon Wiesenthal Center. “The haters are terrified that someone like Kenneth Marcus might come along and take appropriate steps against hate activity.”

“That’s exactly why the Department of Education needs Kenneth Marcus,” Cooper said. “He will help make sure that campuses will not become de facto safe zones for bigots like the anti-Semitic tenured professor at Rutgers.” Cooper was referring to Michael Chikindas, a professor of microbiology at Rutgers University in New Jersey, who recently called Judaism “the most racist religion in the world.”

Prominent Jewish jurists are also backing Marcus. The American Association of Jewish Lawyers and Jurists this week distributed a call to its members to send letters to the Senate Committee on Health, Education, Labor and Pensions in support of the nomination. Irit Kohen, president of the International Association of Jewish Lawyers and Jurists, told JNS.org, “We know Kenneth Marcus, recognize him as a professional with integrity who has dedicated his career to the fight for civil rights, and are sure he will succeed in his new position.”

“Being opposed to BDS is not a reason to disqualify someone from a position in the Department of Education,” said Thane Rosenbaum, a Distinguished Fellow at New York University School of Law and a longtime human rights activist, author and law professor. “In fact, it is a singular qualification because it demonstrates a commitment to justice, fairness and moral balance. BDS is an anti-Semitic campaign led by those who have cynically masqueraded their anti-Semitism as a bogus human rights issue.”

Mark Yudof, emeritus professor of law at University of California, Berkeley and a leader of the Academic Engagement Network, an anti-BDS group, called Marcus “intelligent, articulate, fair-minded and highly qualified to be assistant secretary.” Yudof told JNS.org, “He is not anti-Palestinian; rather he is dedicated to non-discrimination and equal treatment of all students, including Jewish and Palestinian students. He strives for a campus climate that is respectful and free of intimidation.”

Christians United for Israel (CUFI), which calls itself “the largest pro-Israel grassroots organization in the United States;” the National Council of Young Israel, representing more than 100 Orthodox synagogues nationwide; and the World Jewish Congress in North America have also issued statements endorsing Marcus.

“I have known Ken Marcus for over twenty years. There is no one in Washington who could bring more intelligence, integrity and relevant experience to this position,” said CUFI board member David Brog.

The Anti-Defamation League told JNS.org that it has not yet decided whether to take a position on the nomination. But the ADL’s general counsel, Steven C. Sheinberg, recently wrote on his private Twitter account that Marcus is “an absolutely stellar choice!”

Marcus’s confirmation hearing before the U.S. Senate is scheduled to take place on Tuesday, Dec. 5.