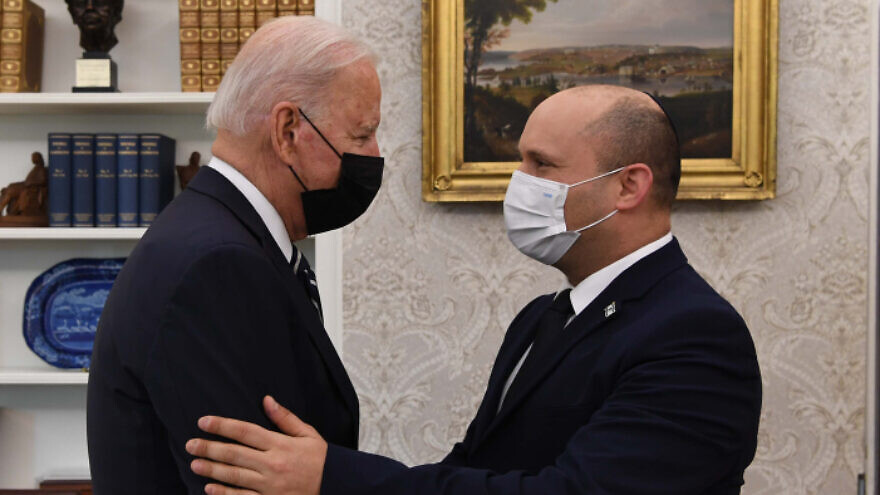 The two leaders also discussed the brewing tensions between Russia and Ukraine, and Bennett also congratulated Biden on the operation to eliminate ISIS leader Abu Ibrahim al-Hashimi al-Qurashi, according to the statement. “The world is now a safer place thanks to the courageous operation of the U.S. forces,” said Bennett.

The two leaders’ telephone conversation came just hours after Bennett warned at the weekly Cabinet meeting that the deal being negotiated with Iran in Vienna would “damage [Israel’s] ability to deal with the nuclear program.”

“The greatest threat against the State of Israel is Iran,” said Bennett. “Whoever thinks that an agreement will increase stability—is mistaken. It will temporarily delay enrichment, but all of us in the region will pay a heavy, disproportionate price for it.”

I had an important conversation tonight with my friend @POTUS. We discussed various matters—including Iran. I thanked President Biden for his steadfast support for Israel.

Together, we reaffirmed the strong and unwavering alliance between our two nations.
????????????????

For his part, Biden “underscored his commitment to expanding stability and partnerships across the Middle East region, as exemplified by the Abraham Accords, together with Israelis and Palestinians enjoying equal measures of security, freedom, and prosperity,” according to a separate readout released by the White House.

I spoke today with Prime Minister Naftali Bennett of Israel to address challenges facing the Middle East, including the threat posed by Iran. I conveyed ironclad support for Israel’s security and underscored my commitment to security, stability, and prosperity in the region.

Bennett thanked the president and his administration for America’s “steadfast support of Israel,” including the decision to fund the Iron Dome anti-missile system.

Bennett and Biden met in Washington in August, and again in October at the 2021 United Nations Climate Change Conference (COP26) in Glasgow. During their conversation on Sunday, Bennett invited Biden and his wife to visit Israel, with the White House saying that Biden “looks forward to a visit later this year.”

The two leaders agreed that their teams would remain in close consultation.