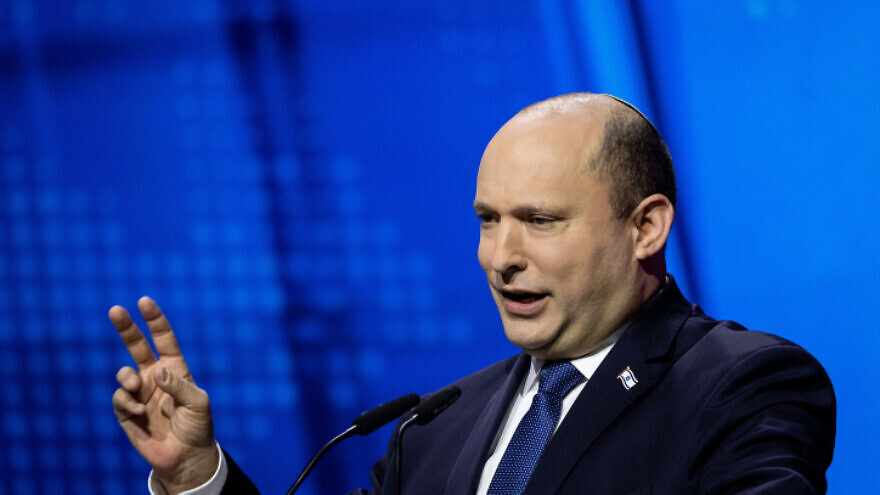 Responding to comments by Iranian Foreign Minister Hossein Amir-Abdollahian, who accused Bennett of spreading lies over the issue last week at the World Economic Forum in Davos, Bennett said: “Spreading lies? Come on. I’m holding right here the proof of your lies in my hands. You see, after Iran stole classified documents from the U.N.’s Atomic [Energy] Agency, Iran used that information to figure out what the agency was hoping to find, and then created cover stories and hid evidence to evade their nuclear probes.

“So how do we know this? Because we got our hands on Iran’s deception plan a few years back. And it’s right here in my hands. Here it is, in the Persian language—hundreds of pages marked with the stamp of Iran’s Ministry of Intelligence,” he continued. “There are even some handwritten notes on the documents by senior Iranian officials—like this one, written by then-Defense Minister [Mohsen] Fakhrizadeh.”

Quoting the letter, Bennett said that “ ‘sooner or later they [referring to the IAEA] will ask us—and we’ll need to have a comprehensive cover story for them.’ See, he’s talking about a cover story. And here’s that cover story. Iran lied to the world, Iran is lying to the world again right now, and the world must make sure that Iran doesn’t get away scot-free.”

The prime minister also accused Iran of systematically deceiving the IAEA while commenting on a report published that day by The Wall Street Journal, which claimed that Iran had “secured access” to secret IAEA reports nearly two decades ago and circulated the documents among top officials, who “prepared cover stories and falsified a record to conceal suspected past work on nuclear weapons.”