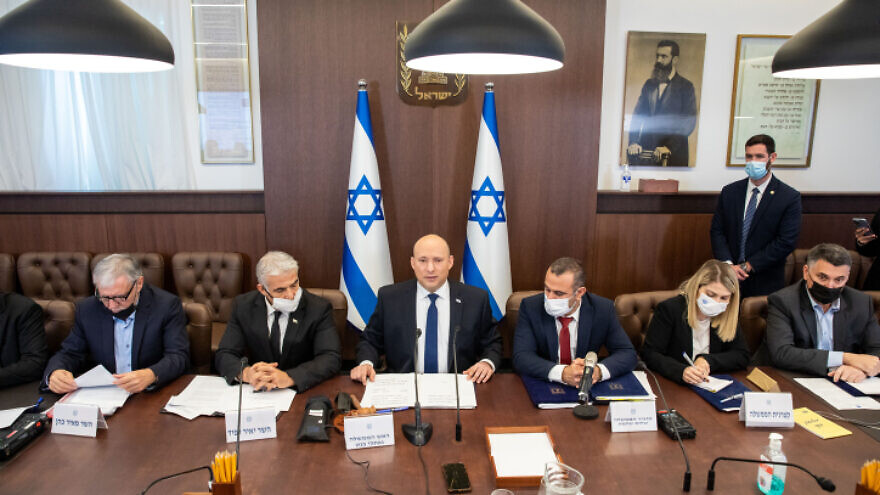 (December 5, 2021 / JNS) Israeli Prime Minister Naftali Bennett said on Sunday that his government’s goal is to “utilize the window of opportunity” between rounds of the nuclear talks in Vienna to tell Washington that the time has come for a “different toolkit” against Iran’s progress in uranium enrichment.

The Islamic Republic “must start paying for its violations,” said Bennett at the start of the weekly Cabinet meeting, according to a statement released by his office.

“The goal of the Iranian regime is the lifting of sanctions,” he said, adding, “For this, it went to Vienna with dozens of advisers and sanctions experts … the ability to do what they are doing now regarding terrorism and in the nuclear sphere—only this time, they want to be strengthened by tens of billions of dollars and a tailwind for all of their activity.”

Referring to the International Atomic Energy Agency report on Wednesday that Tehran had begun to enrich up to 20 percent purity in advanced centrifuges at Fordow, Bennett added, “I call on every country negotiating with Iran … to make it clear that it is impossible to negotiate and enrich uranium at the same time.”

Bennett conveyed the same message during a phone conversation on Thursday with U.S. Secretary of State Antony Blinken.

Tehran, he told America’s top diplomat, was engaging in “nuclear blackmail” as a bargaining tactic.

During his remarks to the Cabinet, Bennett also pointed to Israeli Foreign Minister Yair Lapid’s trip to Europe last week, as well as to Defense Minister Benny Gantz’s and Mossad director David Barnea’s upcoming departure for Washington, to discuss the issue.

The seventh round of negotiations over a return to the 2015 Joint Comprehensive Plan of Action between Iran and world powers paused on Friday, with Blinken telling Reuters, “What we’ve seen in the last couple of days is that Iran right now does not seem to be serious about doing what’s necessary to return to compliance.”