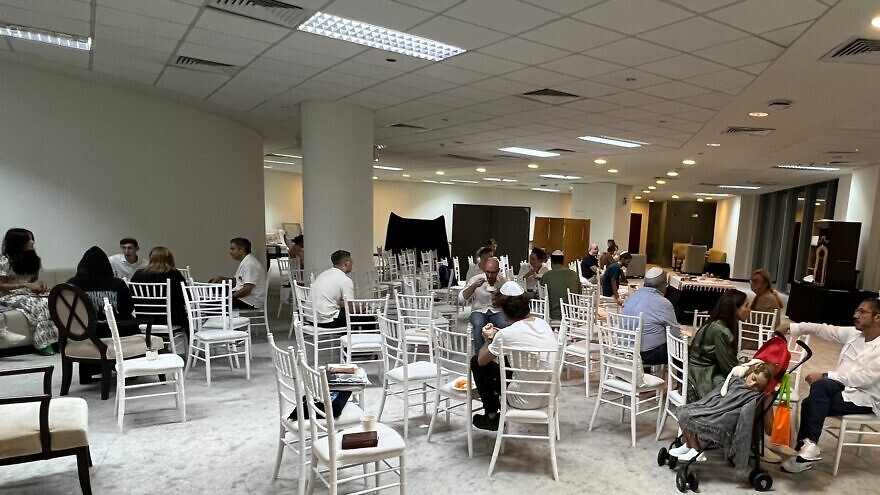 (October 7, 2022 / JNS) Two years after the Abraham Accords were signed, the Jewish community in the United Arab Emirates (UAE) marked its latest milestone by coming together to observe Yom Kippur at multiple locations across the country.

The UAE’s Jewish community has an estimated 3,000-5,000 members from around the world, among a nation of 10 million people, 90% of whom are non-citizens. The Jewish population figure is believed to have grown substantially since the Abraham Accords were signed on Sept. 11, 2020.

Chabad-Lubavitch, which has had a presence in the UAE since 2014, hosted three minyanim for Yom Kippur, including at the Sheraton and Address Hotels in Dubai as well as in the capital of Abu Dhabi.

Rabbi Levi Duchman, the first rabbi to serve in the UAE, told JNS that the gatherings were “a very beautiful celebration.”

Leading an international group at the Address Hotel, where there were many guests speaking several different languages, Rabbi Levi Gansburg of Brooklyn narrated a story about his late great-grandfather Shneur Zalman (named after the founder of the Chabad-Lubavitch movement) in the former Soviet Union. His ancestor once took a personal risk to attend a Yom Kippur prayer gathering that was sparsely attended due to fear of the KGB’s unfavorable attitude toward High Holiday celebrations. The next day, the police knocked on their door because an informant had revealed to them that he recited the Kol Nidrei prayer.

Fortunately, he said his great-grandmother had the acumen to stall them effectively. First, she claimed that “he was getting ready,” but they didn’t buy her story, so she pointed to a coat. “He’s here, he can’t leave without it since it’s so cold outside,” she said. Her ruse worked and bought him much-needed time as he managed to slip out and escape. He returned around Passover, hoping that the locals would have forgotten about the incident by then. Gansburg said he assumed that this event occurred in the late 1930s or early ’40s when World War II was raging on, and the authorities were “too busy” to go searching for him.

“It is just amazing how we can celebrate Yom Kippur so openly now in this country here when less than 100 years ago, it was not possible for Jews to gather together openly in some parts of the world,” Gansburg said. 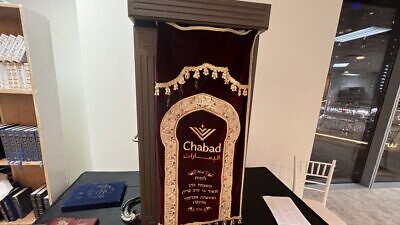 The Torah ark at Yom Kippur services at the Address Hotel in Dubai, UAE, on Oct. 5, 2022. Credit: Avi Kumar.

Chabad held an auction as to who would hold the Torah during Kol Nidrei. The winning $500 bid was counted as a donation to Chabad of UAE.

Mort Wise, an attendee from New Hampshire, said he planned a trip to the UAE after he learned of the government’s “deliberate openness to Jews and them practicing their religion.”

“When I planned a trip to Dubai I decided that I wanted to do it around the Jewish holidays,” he said. “It also seemed like an exciting experience to both be able to worship as a Jew in an Arab country and to also support the local community. The whole experience felt very welcoming, accepting, and engaging.”

Duchman said it was special to observe Yom Kippur openly in a country “which encourages social cohesion.”

“In our prayers, we kept in mind the ongoing peace and prosperity of the UAE,” he said.