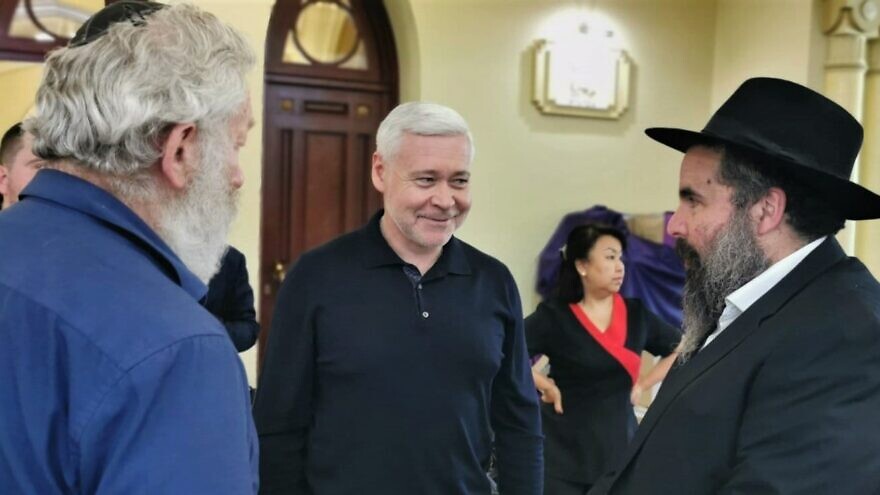 Igor Terechov, the mayor of Kharkiv, Ukraine, made a visit to the Chabad Choral Synagogue, where he met with Rabbi Moshe Moskovitz, the leader of the Jewish community in Kharkiv, May 31, 2022. Credit: Courtesy.
Republish this article
581 WORDS
Spread the word.
Help JNS grow!
Share now:

(May 31, 2022 / JNS) Igor Terechov, the mayor of Kharkiv, Ukraine, made a visit on Tuesday to the Chabad Choral Synagogue, where he met with Rabbi Moshe Moskovitz, the leader of the synagogue and the Jewish community in Kharkiv, as well as local community members who have been living in the synagogue since Russia invaded Ukraine in late February.

Terechov got a firsthand look at the relief efforts that the Jewish community has been spearheading in recent months.

The visit comes as Kharkiv—Ukraine’s second-largest city—and its residents seek a return to normalcy three months after being relentlessly shelled by Russian forces.

“The reaction of people is extremely, extremely encouraging,” said Moskovitz’s wife, Miriam, who was still in Israel as of press time, where they stayed during the worst of the fighting. “People are in awe and inspired that my husband is back. Some of them feel that it is an encouragement that things are going to get better and that there is still a future for our community.”

The Moskovitzes—Chabad-Lubavitch representatives in Kharkiv—have lived in the city for some 30 years. They made the “painful” decision to leave after bombs rained down on their city, one of which landed on a neighboring building. On March 2, they led a convoy of buses and cars filled with Jewish community members out of the city, becoming refugees along with an estimated 14 million other Ukrainians.

On May 23, Moshe Moskovitz returned to Kharkiv with two of his children—Sholom Ber, 22, and Sheina, 16. According to Miriam Moskovitz, her family said it was “very special to be home and be back in our shul.”

They said they felt it was the right time to return because the Russians had been pushed back not only from Kharkiv but from the surrounding towns as well.

In mid-May, a group of Chabad rabbis from Ukraine met to discuss plans for emissaries to return to the country. 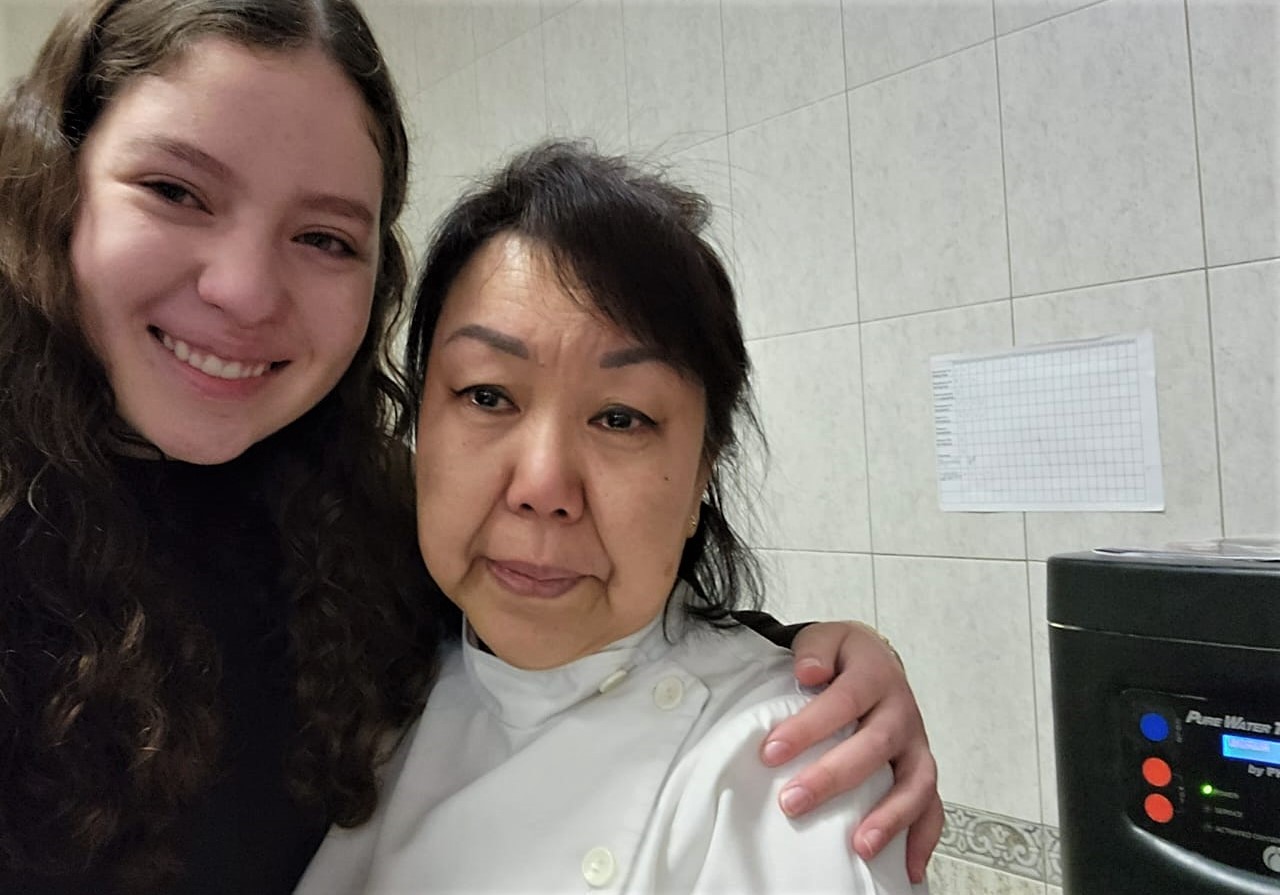 Shaina Moskovitz, daughter of Rabbi Moshe and Miriam Moskovitz, leaders of the Jewish community in Kharkiv, with a cook who helps at the synagogue, May 31, 2022. Credit: Courtesy.

Turning to the holiday of Shavuot

Still, life in Kharkiv is far from normal.

“There are people who are still living in the shul; some of them do not even have houses or homes,” said Miriam Moskovitz, adding that “20% of the city’s residents do not have homes to come back to. My husband said the streets are pretty empty, and a lot of buildings have windows boarded up, but today was the first day the government opened the subway.”

She added that “they want the city to get back to normal, even though there are still the occasional missiles here and there.”

While the Choral Synagogue and the family’s home were largely intact, a preschool and yeshivah that Chabad runs were both damaged by missiles.

Even throughout the worst of the war, the Moskovitzes were determined to help Jewish residents who had scattered; some went to Israel, and others left for cities across Europe. Some, however, remained in Kharkiv.

To ensure that their community was “together” even while apart, the Moskovitzes hosted Zoom classes; posted updates through community social-media pages; and worked to make sure that holiday needs were always taken care of, even for those in Kharkiv. They also arranged for daily food and medicine deliveries for those who stayed in the city.

The family is now turning to the holiday of Shavuot, which begins this week after Shabbat—a celebration of Torah and the Jewish people.

“We are hoping people can come together,” said Miriam Moskovitz. “But we’re still concerned about community members who are all over the place.” 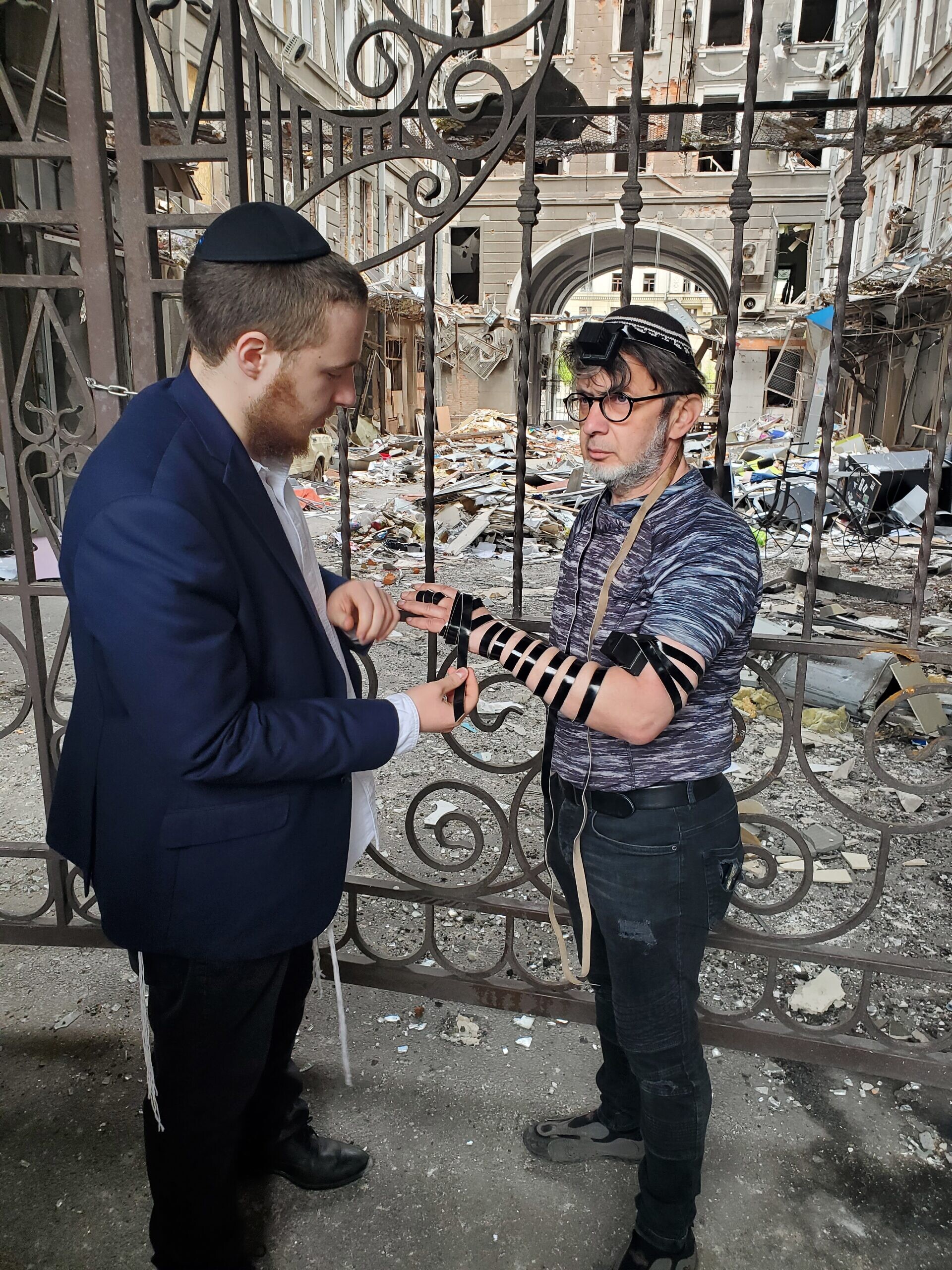 Sholom Ber Moskovitz, son of Rabbi Moshe and Miriam Moskovitz, leaders of the Jewish community in Kharkiv, wraps tefillin with a Jewish resident of the city, May 31, 2022. Credit: Courtesy.
Republish this article in your newspaper or website