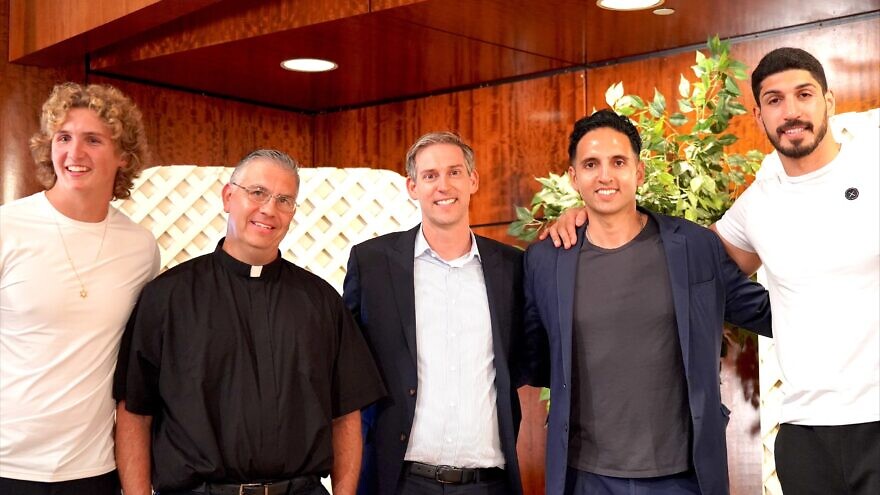 The Conservative congregation hosted a community-wide event on Aug. 10 with two basketball players—one Jewish and one Muslim—taking part in a panel discussion and leading a basketball clinic for 65 kids.

“I think sports are the most beautiful thing,” said NBA player Enes Kanter Freedom, one of the two players at the Westwood synagogue. “We can use it as a tool to bring people together. We can be different colors, from different religions, but everyone loves basketball!”

Kanter Freedom, who is Muslim, was born in Switzerland and grew up in Turkey before coming to the United States to play professional basketball in the NBA. Over the course of 11 seasons, he played for the Utah Jazz, New York Knicks and Boston Celtics, among other teams. While playing, Kanter was vocal about human rights, using his platform as an NBA player and social-media influencer to speak out against Turkish President Recep Tayyip Erdoğan and human-rights abuses in China.

“Once you have that platform, I feel like you have to use it to be the voice of all those innocent people out there who don’t have a voice,” he said at Sinai.

Growing up in Turkey, Freedom was surrounded by people who told him to destroy the Israeli flag. But he recently visited Israel and fell in love with the food, sites and people, he said.

Turell, who is Orthodox, played for Valley Torah High School. If drafted into the NBA, he would be the league’s first Jewish and observant player.

Appearing at Sinai on Wednesday, the 6’7” Turell shared how a dedicated work ethic led to his success on the basketball court. He also spoke about the experience of wearing a yarmulke on the court and how outward displays of Jewishness resonated with non-Jewish players.

“You wear your yarmulke, you stay true to who you are, and they respect you for it,” he said. “A lot of them wanted to know how the heck it stayed on for the games.”

In introductory remarks before the panel discussion, Qudrat said he was trying to build a coalition of Jews, Christian and Muslims that went beyond conflicts in the Middle East.

“Hating Israel and hating Jews is not a Muslim issue,” he said. “This is what we’re rejecting.” 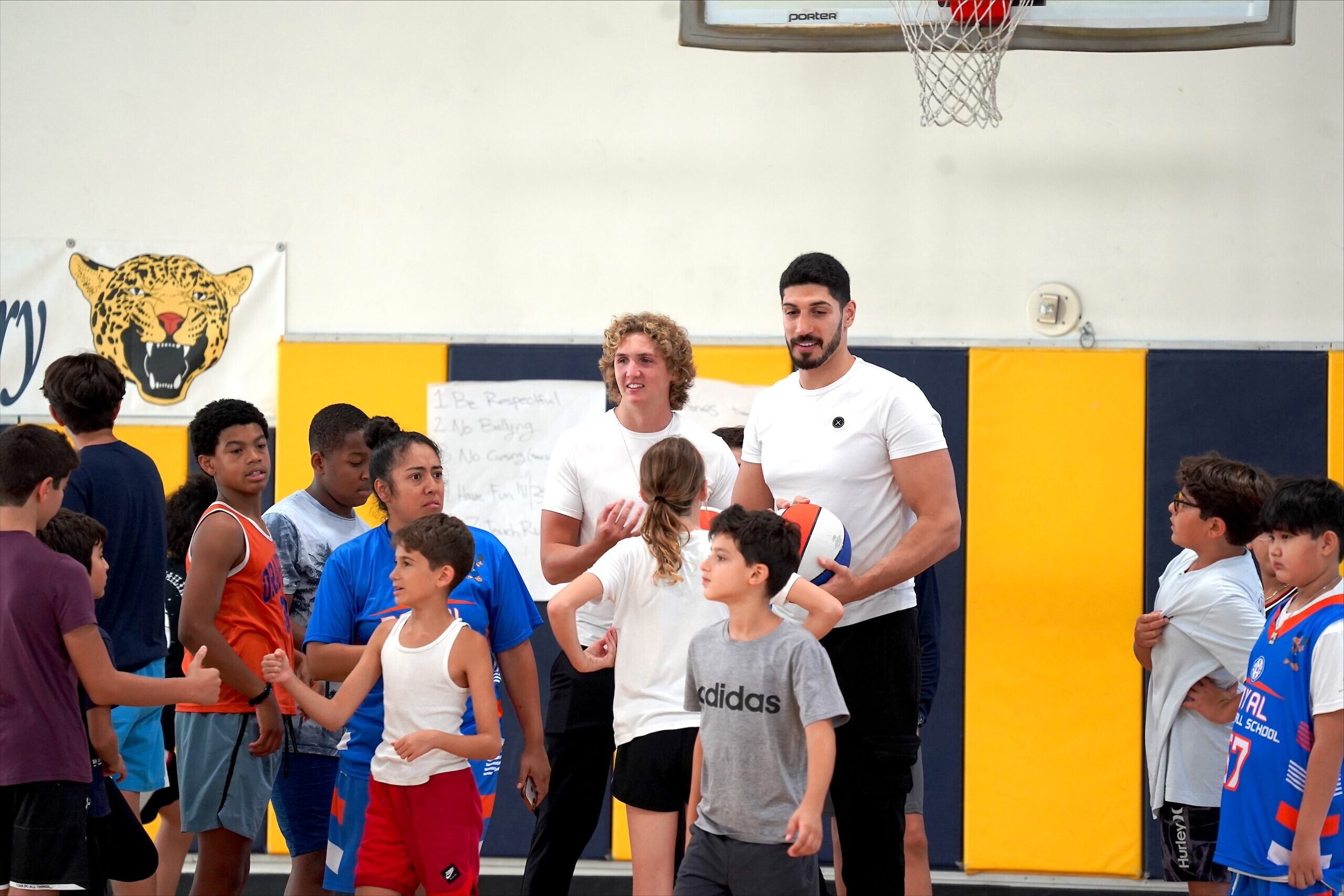 ‘Sports can unite us’

In an interview, Sherman said the event was an extension of his passion for sports and spirituality.

“Sports and faith—I’m passionate about both,” he said. “Not about trade deadlines and box scores, but about what’s in athletes’ hearts and souls.”

The Tamir Goodman Basketball Camp in Israel, Faithful Central Bible Church and Church of the Good Shepherd partnered with Sinai on the event.

During the interfaith basketball clinic, which was open to students of different faiths from first through eighth grades, Mikey Altschul, 21, an incoming senior at Syracuse University and sports marketing major, threw on his basketball shorts and joined Turell and Kanter Freedom in leading the young players in drills and scrimmages.

“I think it’s amazing that everyone came together for this event,” Altschul told JNS.org. “It shows how sports can unite us.” 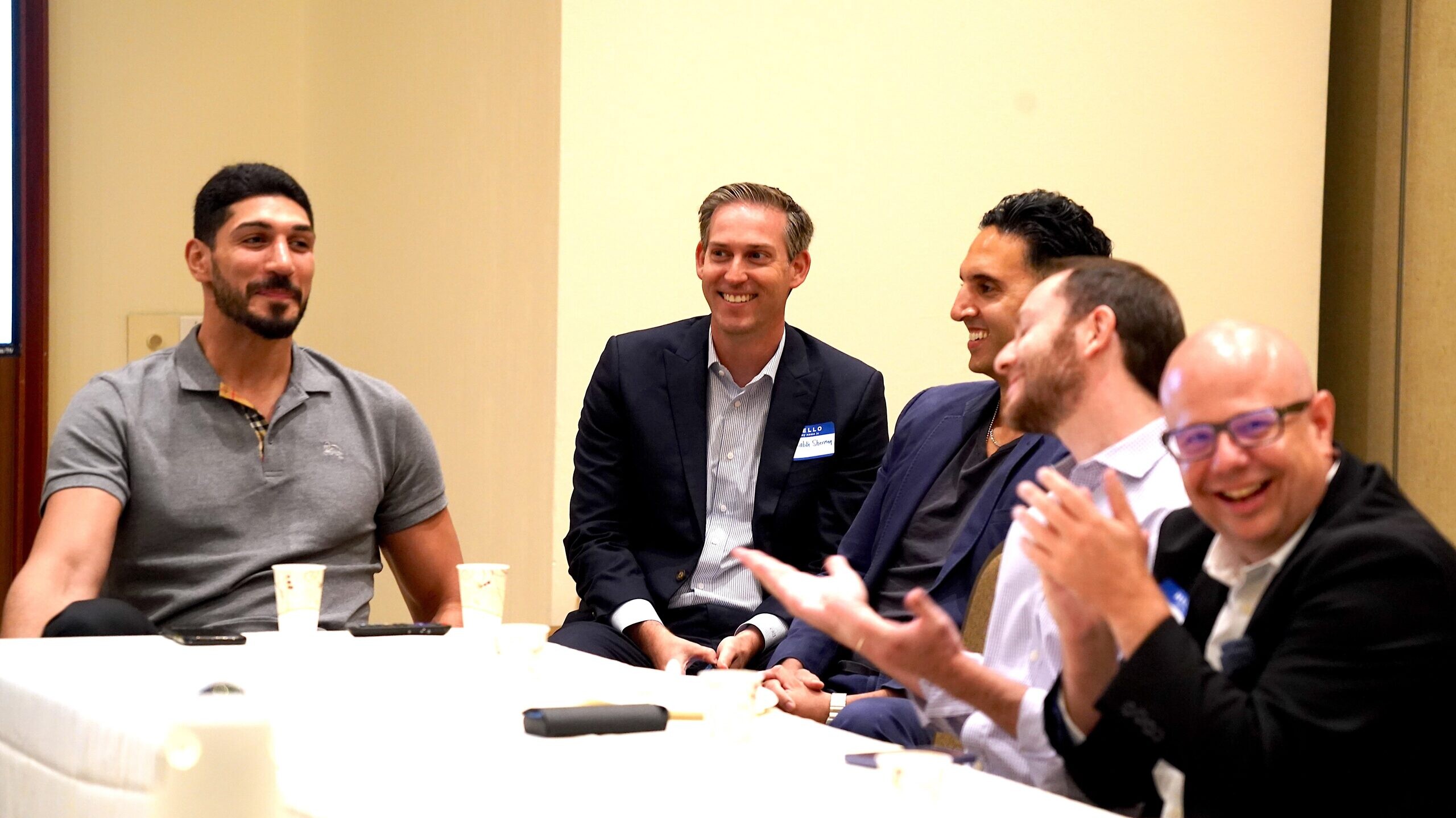 NBA star Enes Kanter Freedom participated in an interfaith event focused on the power of sports at Sinai Temple in Los Angeles. Courtesy of Miller Ink.
Republish this article in your newspaper or website