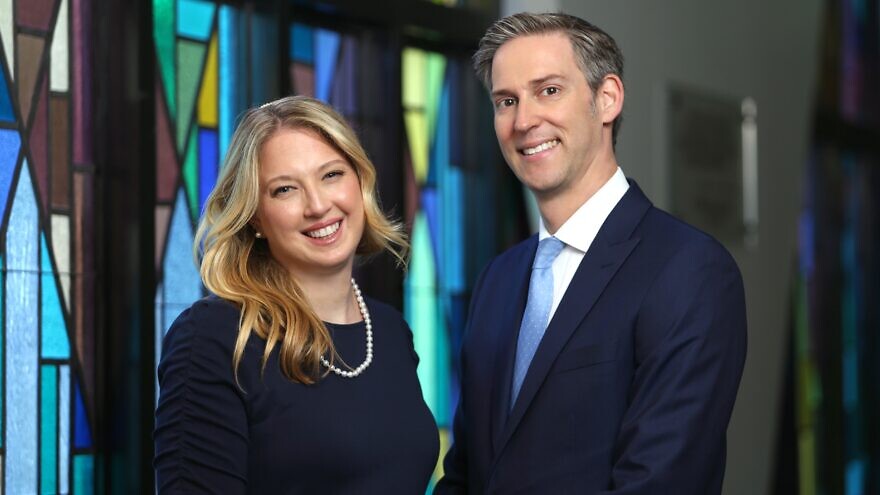 (June 10, 2022 / JNS) After only a week of dating, Erez Sherman and his girlfriend, Nicole Guzik, knew it was serious, but there was one potential problem: They both intended on being pulpit rabbis.

“When people date, they talk about their priorities, and we both said: ‘How’s this gonna happen?’ ” Guzik told JNS. “We agreed that our relationship was too good to let it go, and neither of us would detract from each other’s dreams. We’d never say to the other: ‘You don’t get to be a pulpit rabbi.’ ”

Both were ordained by the Jewish Theological Seminary in New York City. They got married in 2010.

At Sinai Temple, one of the country’s leading Conservative synagogues, they have learned under the tutelage of Max Webb Senior Rabbi David Wolpe, one of America’s most well-known rabbis.

The synagogue formally announced on Tuesday that the pair will take the helm of Sinai Temple, the expansive Los Angeles synagogue that has about 1,600 families.

“When you spend 25 years in a place, what you care most about are the people who are going to succeed you,” said the 63-year-old Wolpe, who has led the congregation since 1997, in a video to the community. “We are so lucky and so blessed to have such learned, charismatic and kind leaders as rabbis Guzik and Sherman. I feel lucky, and Sinai is blessed because they’ll make it your home.”

Once named by Newsweek as America’s top influential pulpit rabbi, Wolpe has written a number of books, including Why Faith Matters. He penned a column for The Jewish Week for more than two decades and has been featured in biblical documentaries on the History Channel, A&E and others. 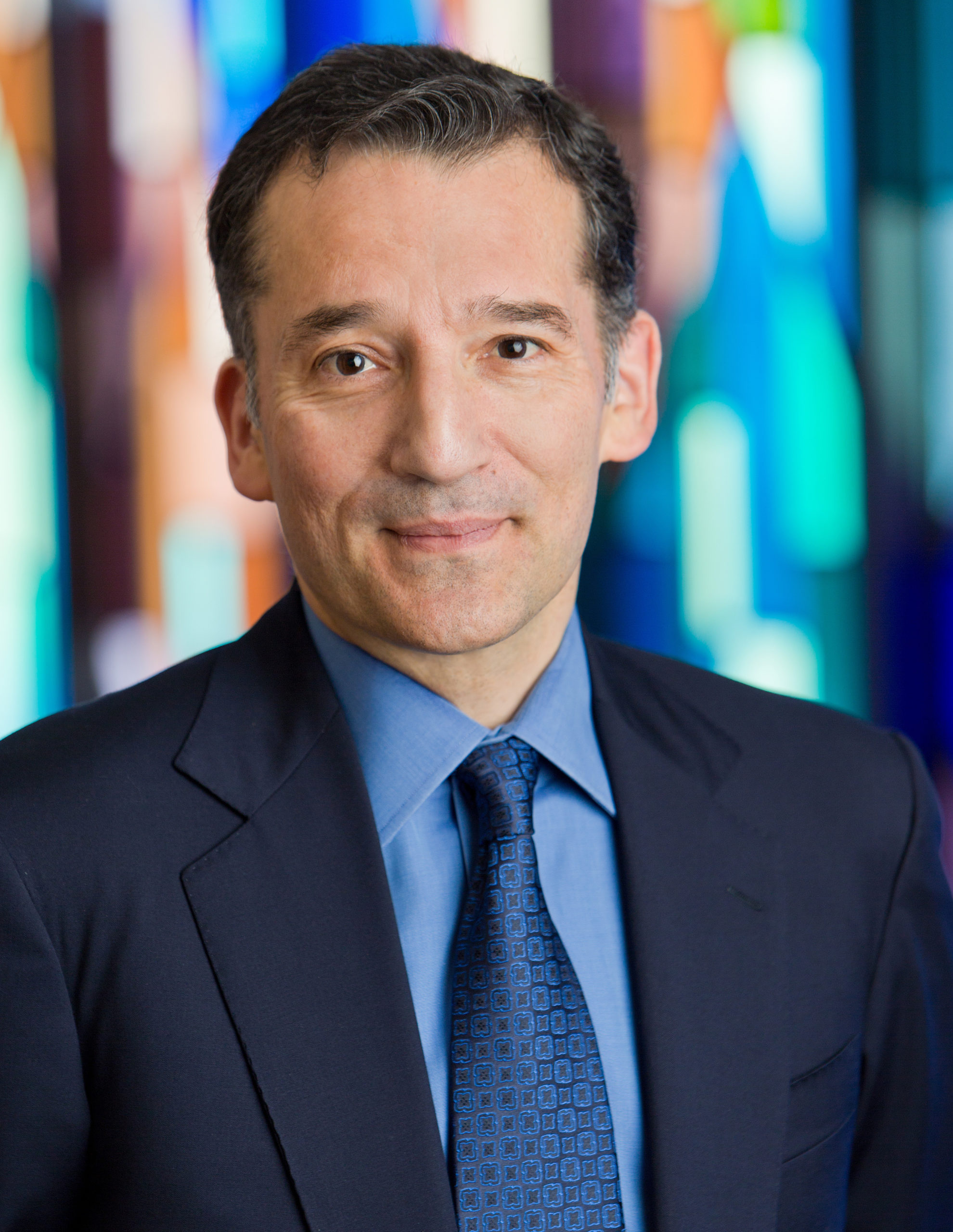 Both rabbis said that one valuable lesson they learned from Wolpe was that leaders should not be afraid to take risks when it comes to initiatives that they think will be beneficial.

“We can both call pages and give a sermon, but we found that we’re both different in our rabbinate,” explained Sherman. “We can use our different passions in the same community.”

Guzik said Wolpe gave her the green light a few years ago to get a degree in counseling and set up the Sinai Temple Mental Health Center.

“I said to him that I was troubled when people would sit with me and say, ‘I’m going through this crisis or divorce or trouble with my kid,’ ” she recalled. “I would say to them, they should really be seeing a therapist. It bothered me I couldn’t be giving them more.”

Sherman said it was important to him to focus on Israel education for rabbis and rabbinical students, as well as interfaith coalition-building. The synagogue set up the Black Jewish Alliance with Pastor John Paul (JP) Foster, a leader of Faithful Central Bible Church in Inglewood, Calif.

Sherman also founded a synagogue basketball camp and hosts a podcast called “Rabbi on the Sidelines” about the intersection of sports and religion. The high-profile roster of guests has included legendary Syracuse basketball coach Jim Boeheim; Emmy-Award-winning NFL broadcaster Andrea Kremer, a member of the Philadelphia Sports Hall of Fame; ESPN college basketball analyst Seth Greenberg; and Ernie Johnson, host of the NBA on TNT. While Johnson often jokes around with the likes of Shaquille O’Neal, Charles Barkley and Kenny Smith, he spoke with Sherman about adopting a son from Romania with significant medical needs. The synagogue also has a school that caters to students with special needs.

Sherman said he drew strength from his late brother, Eyal. Born in Syracuse, and later a resident of Elkins Park outside of Philadelphia, he was a lover of the Eagles football team. Eyal had a brain tumor, and after it was removed suffered a stroke that left him a quadriplegic. He got around in a wheelchair and even learned to paint using his mouth. Sherman said his brother, who died in 2017 at the age of 36, taught him how to be a better sibling and inspired all who knew him—from the person on the street to famous athletes. 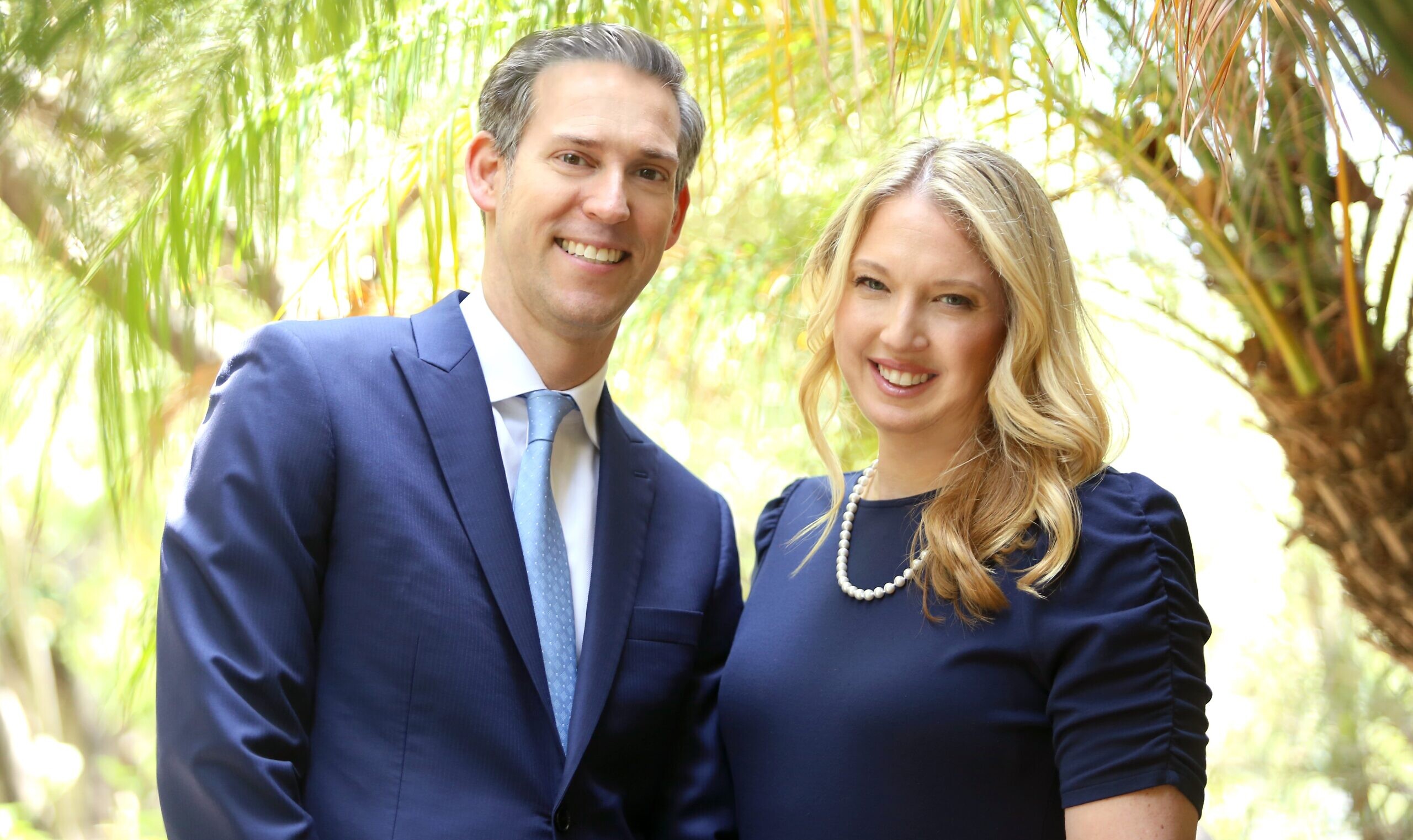 Rabbis Nicole Guzik and Ezra Sherman married in 2010, and as pulpit leaders, say they will focus on Israel education, mental health and Interfaith coalition-building. Credit: Courtesy.

‘A very natural division of labor’

Guzik said they are businesslike at work to the extent that some don’t know they are married. (They actually wed at Sinai Temple.) Sherman proposed to her after he sent her on a scavenger hunt to the places where they used to go.

There will be a transition year until July 2023, they said.

Sherman said several years ago, Wolpe noted that “rabbis are marrying rabbis these days,” and that it would be a powerful model.

As for Wolpe, he has a powerful legacy. Does the couple feel any pressure to follow in his footsteps?

“How could we not?” replied Guzik. “We are humble in the sense that he is a master, a scholar and a friend. The pressure is somewhat alleviated in that he is still here as a guide, and knows when to help and when to step back.”

Sherman said that Wolpe stands out not only for his knowledge but for his ability to see what needs to go where. “He has a vision of what’s missing in Jewish life—identifying those needs, but then he understands how to put that into action. He identified the need for young professionals, and that became a model for the country. With Nicole, it’s mental health, and that’s becoming a model for the country.”

He also noted that building bridges with interfaith organizations has always been important but is even more important in the wake of increased anti-Semitism.

Sherman had served at Shomrei Torah Synagogue in the western San Fernando Valley for five years before coming to Sinai Temple. His father, Charles, is the rabbi of Melrose B’nai Israel Emanu-El in Elkins Park, which inspired him to seek the pulpit as well.

Guzik said they also seamlessly have their own roles as the parents of daughter Annie, and sons Zachary and Henry.

“There’s a very natural division of labor,” she said. “He does the health insurance. I make sure the kids are always packed for vacation. We don’t even have to talk about it; it just works.”

Aside from the challenges of anti-Semitism and a lack of affiliation, both said all synagogue leaders must make their synagogues as accessible and relevant as they can to their members and community.

“I read Steve Jobs’ autobiography, and he said, ‘Nobody knew you needed the iPhone until it was in your hands,’ ” said Sherman. “I think a challenge and an opportunity is to take a synagogue into the 21st century with innovation, insight and depth.”

Guzik added that live-streaming was a gift during the coronavirus pandemic, and the temple continues doing that, though they’ve seen large numbers of people coming in person to services in the past three months. They’ve held “Shabbat in the Park” events that have drawn more than 300 people.

“Showing up is half the battle,” said Guzik, who started out as a rabbinic intern at the synagogue 17 years ago.

Both said they can sense what the other is thinking without having to talk and get a thrill from hosting people in their home for Shabbat meals or other events.

“We’re kind of an old-school couple,” said Guzik. “Before the pandemic, we’d have hundreds of people come to our backyard for meals or events. We were exhausted physically, but it was worth it because we were spiritually full. When you celebrate Shabbat together, it’s very positive.”

The husband and wife, who got engaged on Hanukkah of 2008, said they enjoy seeing the light in the eyes of the people who want to rejoice, ask questions, and have and develop a stronger spiritual connection.

Said Guzik: “We hope an invitation to our home will help people see Sinai Temple as their home.”