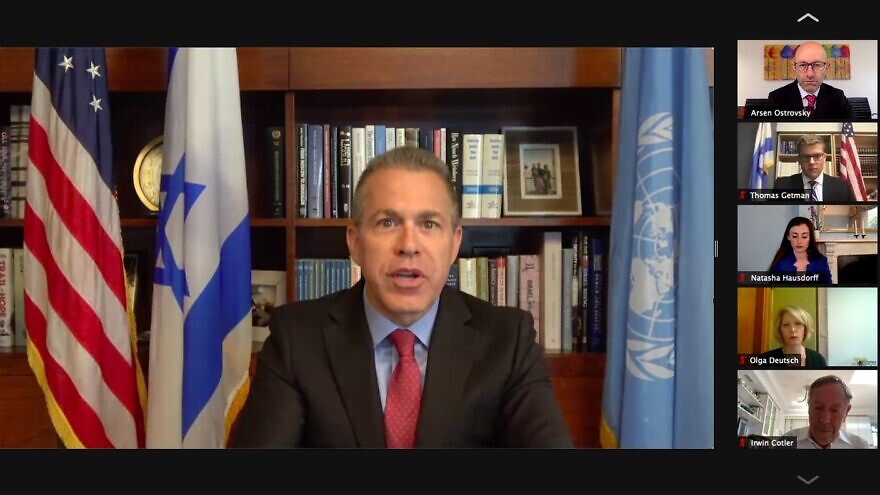 Erdan pointed to the hypocrisy of U.N. members for not enforcing its own Security Council Resolution 2129 of 2013, which affirms the rights of member states to prosecute and penalize the financing, direct or indirect, of terror organizations and their activities.

In a detailed letter to U.N. Secretary-General António Guterres, Erdan outlined the reasons why those organizations were given those designations by Israel as, through money laundering and other tactics, provided a lifeline for the Popular Front for the Liberation of Palestine (PFLP), an organization designated a terror organization by the United States, European Union, Australia, Canada, Japan and Israel.

The PFLP, wrote Erdan, pioneered terrorist attacks in the 1960s and 1970s through armed airplane hijackings, and through the half-century continued to murder civilians, children and students in bloody terrorist attacks and bombings.

After extensive investigations by Israeli authorities, the six organizations were found to have contributed to the PFLP by raising funds from foreign donors by disguising themselves as human rights and civil society organizations. These organizations also employed and provided consistent salaries to individuals who openly declared being PFLP operatives and allowed the PFLP to use its facilities as safe-havens.

Several of the operatives were found to have actively participated in plotting and executing attacks against Israeli civilians.

The organizations given the designations included the Union of Agricultural Work Committees (UAWC), Addameer, the Bisan Center, Al-Haq, Defense for Children International-Palestine (DCI-P) and the Union of Palestinian Women’s Committees (UPWC).

“Therefore, while Israel attaches value to the work of Palestinian civil society organizations, it cannot allow the financing of terrorism under the pretense of humanitarian and civil assistance. With these recent designations, Israel does not seek to curtail freedom of expression nor limit any humanitarian activity. Israel acts against terror, and its channels of funding, in order to protect its citizens and society, as it is obligated to do,” wrote Erdan.

“Israel expects the international community to condemn this dangerous abuse of civil society organizations and calls upon all United Nations member states, in accordance with their obligations to prevent terrorism, money laundering and terrorist financing, to immediately halt any further transfers of funds and any other support to these designated institutions.”