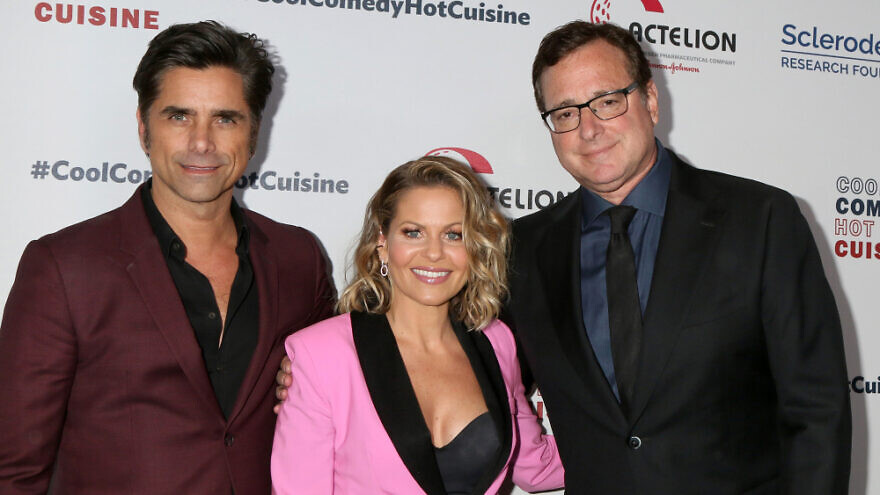 (January 11, 2022 / JNS) Robert (“Bob”) Saget was best known as the understanding and loving father Danny Tanner in the ABC hit sitcom “Full House.” As a recently widowed father of DJ, Stephanie and Michelle (Candice Cameron Bure, Jodie Sweetin, and twins Mary-Kate and Ashley Olsen), he always knew how to solve problems by talking it out. Though his character was squeaky clean on the show that ran from 1887 to 1995, many didn’t know that in his stand-up routine, he would often curse.

Saget, who was Jewish, died on Sunday at the age of 65, found in bed at the Ritz-Carlton in Orlando, Fla., with no signs of foul play. While some reports said he spoke about having COVID an undetermined time ago on stage and on a podcast, there was no confirmed cause of death.

Saget was the straight man to the wisecracking Joey (Dave Coulier) and Uncle Jesse, played by the teenage heart-throb John Stamos. Joey’s catchphrase was “Cut it out!” and Jesse’s was “Have mercy”; Saget didn’t have one. He told The Huffington Post in March 2015: “I always walked into the room and said, “What’s going on?’ Always. It’s not a catchphrase, but I said it was because when you’re a character on a show and you’re the protagonist—not the comedy foil because I was kind of the straight guy on the show—I would always walk into a room where everything was going crazy and I would say, ‘What’s goin’ on? Like, “What’s up? … I didn’t have a catchphrase, but I had that.”

His last line on the last episode of “Fuller House” on Netflix, where he reprised his role as Danny Tanner, had him toasting his daughters at a wedding:

“When a little girl is born, all her dad wishes for is that she be safe and happy forever. May all your days be a little bit like this one, full of joy and happiness, and surrounded by people who love you. I love you! Cheers.”

‘Why weren’t you in my life sooner?’

Saget was also the host of ABC’s “Americas Funniest Home Videos,” which often featured his reactions to a cat getting stuck or a person getting injured while playing a sport or falling. He was married to Kelly Rizzo and had three daughters with his first wife, Sherri Kramer. Born May 17, 1956, in Philadelphia, Saget had a podcast called “Bob Saget’s Here for You” and once appeared on the HBO hit show “Entourage.”

The author of several books, including Bob Saget’s Tales From the Crib, he was in the middle of his “I Don’t Do Negative Tour” and reportedly performed on Saturday night.

In a roast of Bob Saget, the late comedian Norm MacDonald said: “Bob has a beautiful face like a flower, yeah, a cauliflower … .”

He added that Saget did not have an unkind word for anybody.

Saget graduated from Temple University in Philadelphia in 1978, studying at its film school. Appearing on “The Joe Rogan Experience,” he said he started out “as a musical act we would all ridicule.”

“Why weren’t you in my life sooner?” Saget asked Rogan, also telling the host that his sister died of scleroderma.

Speaking of “SNL” performer Chris Farley and other comedians who died, Saget asked Rogan: “Why do really truly funny people have to die? Shouldn’t there be some kind of universal law? … When you say Robin Williams to somebody, anybody, they get emotional.”

He said on Sept. 11, 2001, after seeing the news coverage of the terror attacks, he watched “Mrs. Doubtfire,” which starred Williams, needing humor at such an incredibly traumatic time. Comedian Elon Gold once had Saget and other comedians online for a Purim schpiel, where Saget played the evil Persian Haman and Howie Mandel played Queen Esther’s uncle, Mordechai. In a hilarious moment, Saget asked: “Silence! Have you no respect for the crown?” To which Mandel answered: “It’s arhait, but I don’t get why it has so many Emmy nominations.”

In a video conversation with Saget on Instagram Live, Saget joked that matzah tended to be very binding. Gold commented that his fans might not realize just how Jewish Saget really was.

Gold posted the following online on the loss of his friend:

“I couldn’t post yesterday. Was in shock. Was too sad. This is a devastating loss to us. Comedians everywhere are feeling this. We are a brotherhood. Bob was everyone’s big brother. He loved and was loved by all. He was always hilarious and always incredibly kind. There isn’t a comedian who had the privilege of knowing Bob that didn’t cherish him. He made you feel like he was your good friend. But he had a thousand good friends. He was there whenever I reached out. … Everything he did was with brilliant humor and true love. He was a giant of a man. An icon. But you wouldn’t know it when you hung out with him. He was just the funniest guy at the table.”

‘Likable and menschy, and clearly loved by all’

Veteran Jewish comedian Modi Rosenfeld, who goes by his first name of Modi, said he met Saget through comedian Elon Gold and praised Saget, with whom he shared a few Shabbat meals.

“He was the nicest person and was happy to be doing something Jewish,” Modi told JNS. “I loved him in everything he did. I loved that on his show he was a father who was wholesome, and his comedy on stage was a complete 180. He was just the sweetest guy. I related to him both as a comedian and a Jew. His death is untimely and horrible, and a reminder that this is it. We have one life. It’s not a rehearsal, and we have to enjoy it as much as we can.” “He’s someone I shared with my kids,” she said. “I watched ‘Full House,’ and they watched ‘Fuller House.’ So likable and menschy, and clearly loved by all.”

Dani Zoldan, co-owner of StandUp NY on Manhattan’s Upper West Side, told JNS: “Unfortunately, I never had the pleasure of meeting Bob Saget, but many comedians that I’m friends with have crossed paths with him at standup show. Their tributes to Bob are consistent—that he was an incredibly kind and warm person. I’m sad for the comedy community for losing a mentor, his fans, and above all, his family. Tremendous loss, it’s heartbreaking.”

Rapper Rami Even-Esh, better known as Kosha Dillz, said it was sad to lose Saget, who was a fixture of his television viewing.

“I grew up on ‘Full House,’ so that’s an iconic image of parenthood from middle school,” the rapper said. “Back then, you watched these shows, and there were the basic life lessons.”

Yitz Jordan, a rapper and social-media influencer known as Y-Love, posted online that he enjoyed Saget in the film “The Aristocrats,” which is about the telling of a joke.

“Bob Saget could get on the Disney Channel and say ‘Rated G’ jokes that would make Dave Chappelle be like, ‘Well sh*t, I got nothing.’ ”

On CNN, comedian Gilbert Gottfried said he spoke to Saget a few days ago, and that he sounded great. He said whenever anything became sincere, they would turn the conversation to outrageousness.

He said he found out about Saget’s death after being called by comedian Jeff Ross.

“I always enjoy a sick joke, so I was waiting for the punchline,” said Gottfried. “And then that didn’t come. I feel like it’s a day later, I’m still waiting for a punchline to happen … .”

Gottfried referred to Saget as a caring person who was always quick-witted.

Stamos tweeted: “I am broken. I am gutted, I am in shock. I will never ever have another friend like him. I love you so much, Bobby.”

In a conversation about anti-Semitism with Ross on a video, Saget joked that if Jew-haters came for him, he would say he wasn’t Jewish. “Danny Tanner’s not Jewish? Come on … Danny Tanner will one day save my life.”

Saget said while living in Virginia, he saw racism and anti-Semitism, but that recent hatred against Jews was weird—something you would only go through “in a sci-fi movie.” He has said rocks were once thrown at him in his younger days because he was Jewish.

‘Saget, you’re not an entertainer’

In a 2014 interview with the Atlanta Jewish Times, Saget explained his comic origins.

“Well, a lot of it was rebellion,” he told the paper. “In my Hebrew-school training, I would spend more time trying to impress the girls in the class. I remember the rabbi taking me up in his office saying, ‘Saget, you’re not an entertainer; you have to stop doing this.’ I couldn’t stop.”

“Most of the people that I worshipped were Jewish people,” he told the Times. “It’s funny, I always say ‘worshipped,’ instead of worship. I should be worshipping in the eternal light, but I worship Alan King.”

In what is believed to be Saget’s last YouTube post, he joked about watching a Disney+ show featuring Stamos many times.

“I watch him as much as he looks at himself,” he said.

Saget wished that everyone would keep safe, and hoped that people could find comedy and love.