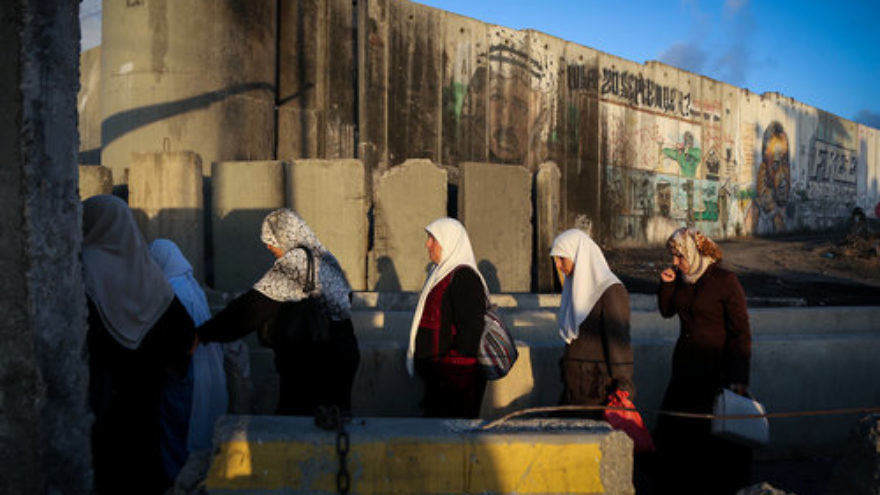 (February 8, 2017 / JNS) The controversy over Israel’s security checkpoints is heating up in the wake of a new investigative report showing that the perceived hardships endured by many Palestinian travelers are much less severe than critics of Israel have charged.

Human Rights Watch asserted in its most recent annual report that waiting times at the checkpoints are “onerous,” and Amnesty International has claimed that the waiting times constitute “collective punishment.” But filmmaker and investigative journalist Ami Horowitz, in a video report titled “Palestinian Road Trip,” found something very different.

Horowitz presents interviews he conducted with Palestinian travelers at the Kalandia checkpoint, which is the major access point to Jerusalem from Palestinian Authority-controlled areas. There are a total of 26 checkpoints at entry points to Israel from those territories.

All of the Palestinians with whom Horowitz spoke said that it took them 10 minutes or less to get through the checkpoint. “That included waiting time and the time it took for the Israeli soldiers to check their identity papers,” Horowitz told JNS.org. Horowitz found a similar situation at the Bethlehem checkpoint.

The filmmaker also hired a Palestinian driver and traveled “over 300 miles” throughout the disputed territories in an automobile bearing Arab license plates. “We were not stopped even once,” Horowitz said. “The notion that Palestinians’ freedom of movement is restricted was not borne out by my experiences.”

Horowitz’s investigation of the checkpoints is one part of a full-length film about Israel and the Palestinians that will be released later this year. He decided to unveil the checkpoints segment now, in response to the claims made by Secretary of State John Kerry in his speech about Israel last December.

Kerry had said that Palestinians “are restricted in their daily movements by a web of checkpoints” that “can make even the most routine daily trips to work or school an ordeal.” He claimed the checkpoints prohibit Palestinian businessmen from making a living, and impede Palestinians from receiving medical care.

Sari Bashi, the “Israel and Palestine Advocacy Director” for Human Rights Watch, told JNS.org that regardless of the waiting times, she objects to the very existence of the Kalandia checkpoint on the grounds that it leads into eastern Jerusalem, arguing that “east Jerusalem is part of the occupied West Bank,” which “should, under international law, be open and accessible to Palestinian residents of the West Bank.”

Bashi was asked by JNS.org to view Horowitz’s five-and-a-half-minute video and comment upon it, but she declined. Horowitz, in response, said, “Her refusal to even watch a short video that would possibly add some depth and context to Human Rights Watch’s reflexive anti-Israel position says it all.”

Prof. Gerald Steinberg, director of the Jerusalem-based research institute NGO Monitor, said the position of Human Rights Watch fails to recognize the role of the checkpoints in pre-empting suicide bombers and other terrorists. “Bashi’s fundamental objection to checkpoints reflects the way in which Israeli human rights are routinely ignored by Human Rights Watch and other NGOs,” Steinberg said. “Israel has an obligation to its citizens, as well as to Palestinians, to provide security and maintain order. Checkpoints have been effective in preventing terror and violence.”

Dr. Alex Safian, associate director and research director of the Committee for Accuracy in Middle East Reporting in America (CAMERA), noted that waiting times on security lines at U.S. airports can be much longer than those that Horowitz found at Kalandia. According to the Transportation Security Administration, passengers at Terminal 4 in New York City’s John F. Kennedy International Airport at 5:30 p.m. earlier this week waited 11-20 minutes, and those at Terminal 5 at 8 a.m. were held up for 21-30 minutes. On one recent afternoon, passengers at the airport’s Terminal 8 at 3 p.m. waited 61-90 minutes. Safian found that the average wait on peak days at that airport “is more than 40 minutes.”

Spokespeople for Amnesty International as well as the Israeli NGOs B’Tselem and Machsom Watch were invited by JNS.org to comment on Horowitz’s film and the checkpoints controversy, but did not respond.

The checkpoints issue features prominently in the arguments made by proponents of the Boycott, Divestment, and Sanctions (BDS) movement. Pro-BDS groups are promoting a boycott of Motorola because the company has manufactured communications systems that are used by Israeli soldiers manning the checkpoints.

In 2014, the Presbyterian Church USA voted to divest from Motorola on the grounds that the company was assisting “checkpoints that dehumanize Palestinians,” and the United Church of Christ cited the checkpoints in adopting its own pro-BDS resolution in 2015. The Evangelical Lutheran Church has embraced a manifesto known as the “Kairos Document,” which accuses Israel of perpetrating “daily humiliation” of Palestinians at checkpoints. As a result, a number of Lutheran synods around the country have called for boycotting Motorola.