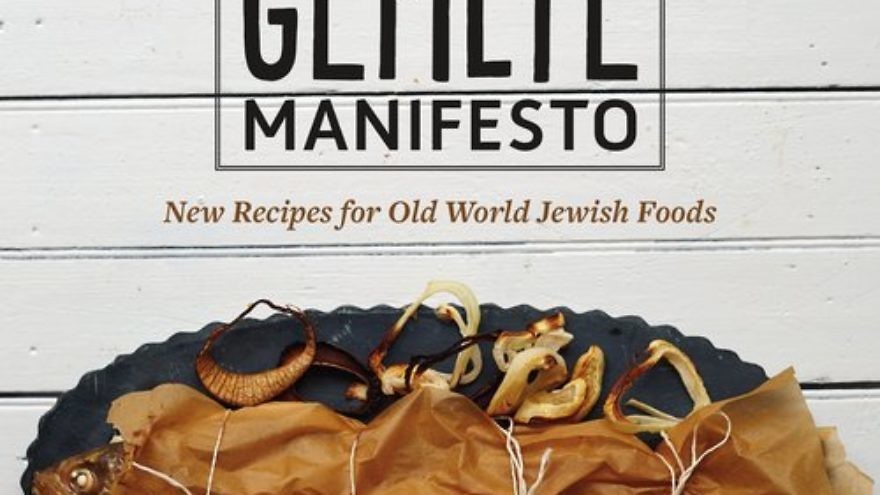 Having paid their dues on the Brooklyn food scene, emerging young chefs Liz Alpern and Jeffrey Yoskowitz are on a mission to reclaim and revolutionize Ashkenazi cuisine.

The millennial duo’s mission starts with their book, “The Gefilte Manifesto: New Recipes for Old World Jewish Foods,” which was released in September and could make for the perfect Hanukkah gift as the holiday approaches this month.

Alpern and Yoskowitz, who were featured in Forbes’s “30 Under 30” list for food and wine in 2014, are drawing praise from prominent chefs. Mollie Katzen—a bestselling author-illustrator of vegetarian cookbook classics such as “The Moosewood Cookbook,” “The Enchanted Broccoli Forest,” and “The Heart of the Plate: Vegetarian Recipes for a New Generation”—said the new cookbook from Alpern and Yoskowitz “beautifully manages to frame traditional Ashkenazi cuisine with perfect twists and newness.”

“It’s no small feat to retain the character of an old, emotionally held culinary culture while imparting fresh life to the standards,” Katzen told JNS.org. “Jeffrey and Liz nailed it, not only with outstanding recipes but also with history and stories and context, impeccably written. The passion of yet another generation carries it forward; we Jewish mothers can be collectively entranced, inspired, and proud.”

“The Gefilte Manifesto” includes recipes for pantry staples, pickles, breads, soups, dumplings, lighter side dishes, deli sides and specialties, main courses, desserts, and beverages, as well as a chapter on “choosing your own leftover adventure.”

In 2011, Yoskowitz, Alpern, and Jackie Lilinshtein founded The Gefilteria, a food venture whose mission is to adapt classic Eastern European Jewish cuisine to the values and tastes of a new generation. The initiative launched a reimagined brand of gefilte fish and started hosting pop-up dining events.

“For us, it all started with gefilte fish,” states The Gefilteria’s website. “We took the classic dish and reimagined it, making it colorful, gluten free and responsibly sourced (with non-GMO olive oil and the highest quality fish). And we also made sure it tasted really great.”

Published five years after The Gefilteria’s founding, “The Gefilte Manifesto” is essentially the food venture’s playbook.

How the authors crossed paths

As an undergraduate student at McGill University in Montreal, Alpern baked challah out of her home and sold it because there was no kosher bakery in her neighborhood.

“I fell in love with baking and cooking big meals and Jewish holiday cooking, and after university I worked on a magazine and then got a job working for [cookbook author] Joan Nathan,” Alpern told JNS.org. “I did recipe testing for her, and she got me a job in a pastry kitchen and on a food truck. Then I crossed paths with Jeffrey and we both were super on fire about Jewish foods.”

After hitting it off, Yoskowitz and Alpern would go on to launch The Gefilteria.

“My dad took me to the Jewish delis and kinisheries and the Jewish food institutions of New York when I was a child,” he said. “I was always interested in food and even studied the kosher food industry for my senior thesis [at Brown University]. When I graduated I became a farm fellow and moved to Adamah Farm, a Jewish organic farm.”

At Adamah, Yoskowitz became a pickle apprentice, falling in love with the art of lacto-fermentation—a style of pickling and preserving that does not involve vinegar and is the classic style of making the Jewish deli pickle.

Pickling helped Yoskowitz discovered the wisdom that is inherent in Jewish cooking.

“Not only does the pickle have a lot of flavor, the method of making it relies on a natural occurring bacteria—acidophilus, what’s in yogurt—which is very good for your digestion and is probiotic,” he said. “Growing up eating a pastrami sandwich with a full sour pickle next to it, wow, it’s the best way of helping digest that fatty pastrami sandwich. That’s when I learned this tradition has a built in wisdom to it. This inspired me.”

“It was an awakening, where food comes from, the experience creating it,” Yoskowitz added. “Then I got into writing.”

Now an entrepreneur, consultant, cook, and public speaker, Yoskowitz’s writings have been published in The New York Times, The Atlantic, and Gastronomica.

“It pulls out time-tested favorites and lost gems, and finds ways to make them taste at once fresh and innovative, and utterly authentic,” Koenig told JNS.org.

“Gefilte is not just about your bubbe,” they write. “It is not about kitsch or a foodie revolution. Gefilte is about reclaiming our time-honored foods and caring how they taste and how they’re sourced. It is about serving a dish with pride, not simply out of deference to hollow convention. It is about taking food traditions seriously and reclaiming the glory of Ashkenazi food—what it has been and what it can be.”