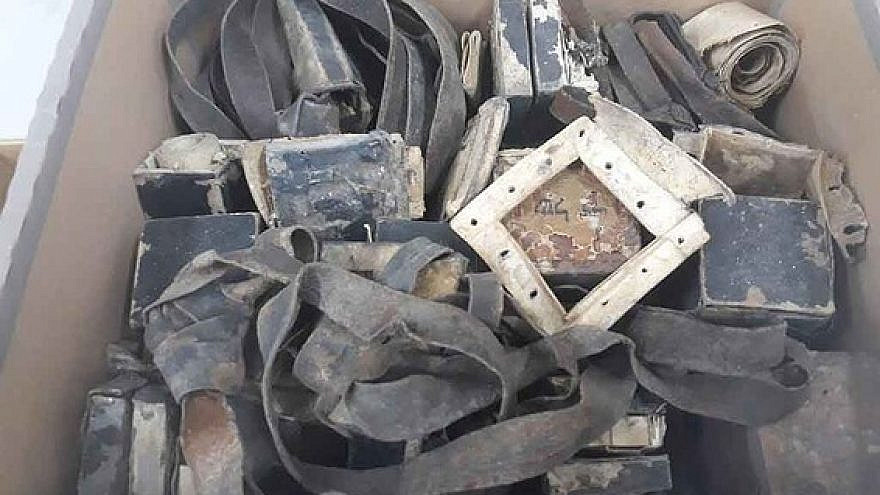 These phylacteries were found in a bunker unearthed in the ruins of the Warsaw Ghetto. Courtesy: Shem Olam Faith and the Holocaust Institute.
Spread the word.
Help JNS grow!
Share now:

(January 25, 2021 / Israel Hayom) A bunker containing 100-year-old tefillin (phylacteries) hidden from the Nazis in World War II has been discovered in the ruins of the Warsaw Ghetto.

In recent years, Polish authorities have begun to demolish buildings inside the Warsaw Ghetto to turn them into residential buildings in a process of urban renewal. Following one such demolition, construction workers discovered an entrance to a bunker dug in preparation for the 1943 Warsaw Ghetto Uprising. One of the Polish construction workers on the site who entered the bunker to clear it out discovered 10 phylacteries that had been hidden behind books and other items.

Hearing of the sensational discovery from their local contacts, European emissaries of the Shem Olam Faith and the Holocaust Institute for Education, Documentation and Research secretly contacted the construction workers. Following lengthy negotiations and a commitment to keep the transaction secret from Polish authorities, the phylacteries were handed over to the emissaries. They recently arrived in Israel, where they were transferred to the institute for disinfection and conservation.

Shem Olam announced that it had the phylacteries ahead of a conference it is set to hold to mark International Holocaust Remembrance Day. The virtual conference, which will be open to the public, will include panels on the memory of the Holocaust from an international perspective and will be attended by politicians, spiritual leaders, rabbis and historians from around the world.

According to Shem Olam director Rabbi Avraham Krieger, “The discovery of 10 phylacteries concentrated in one place testifies to the Jewish lifestyle they maintained in the ghetto. Despite the horrors and the cruel reality in which they lived, they continued to observe the customs and tradition they grew up with.”

He noted that “the number of phylacteries points to the underground minyans [prayer quorums of 10 people] they succeeded in holding inside the bunker, underground and under the Nazis’ noses. The phylacteries were hidden alongside weapons and hunting tools that served the Warsaw Ghetto rebels, which testifies to their importance in the eyes of the Jews.”