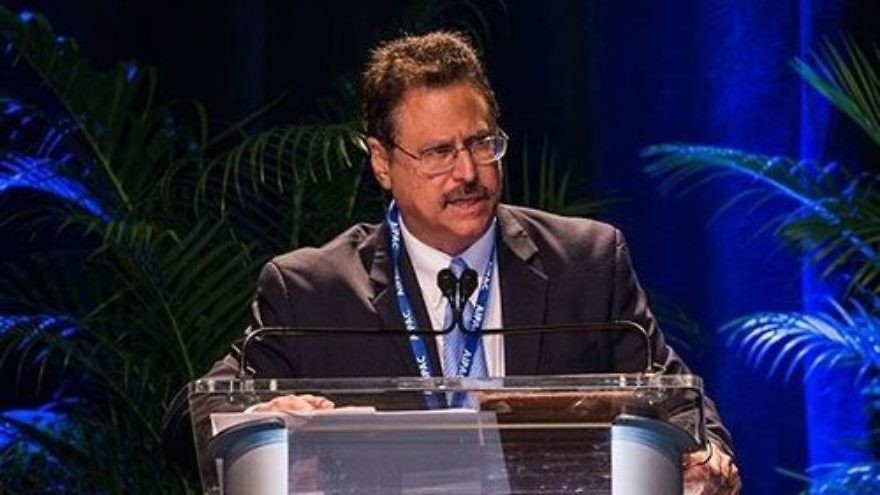 (October 10, 2016 / JNS) WASHINGTON – When Hispanic-American pastors from around the country met in the nation’s capital last week, the main issue on their agenda was not immigration or health care–it was Israel.

The pastors represented evangelical congregations from Connecticut to Oklahoma. This rapidly-growing portion of the U.S. Latino electorate could have a significant impact on American policy toward Israel in the years ahead.

The mobilization in Washington was the work of the Hispanic Israel Leadership Coalition (HILC), an arm of the National Hispanic Christian Leadership Conference, which represents 40,118 Hispanic evangelical congregations across the country.

HILC president Pastor Mario Bramnick told JNS.org the purpose of the all-day gathering was to “pray together, to consult with our Israeli and Jewish friends, and to strategize practical ways to help the Jewish state.”

An estimated 160 pastors took part in a morning session Oct. 5 at the Israeli Embassy, where they met privately with Israel’s Ambassador to the United States Ron Dermer. Bramnick, the spiritual leader of the New Wine Ministries Church in Cooper City, Florida, said they discussed “ways to engage the Hispanic-American community and build bridges between Hispanic Americans and Israel.” He said, “[Israeli] Prime Minister [Benjamin] Netanyahu and Amb. Dermer clearly understand the importance of reaching out to Hispanics.”

In the afternoon, several dozen of the pastors and other Hispanic evangelical activists held strategy sessions at a hotel in suburban Silver Spring, Maryland.

Among the speakers was Pastor Ruben Mendez, of the Cornerstone Church in San Antonio, Texas. He focused his remarks on the importance of encouraging pastors to become educated about Israel by visiting “and witnessing for themselves the great miracles that God has wrought, just as the Bible promised.”

Bramnick then discussed the HILC’s recent political action initiatives, saying that Christians have a moral obligation to serve as “Daniels, Josephs, and Esthers,” by speaking out for Israel. He cited the HILC’s opposition to the Iran nuclear deal, its successful lobbying to strengthen the Israel plank of the Republican Party’s platform, and its campaigns against Boycott, Divestment, Sanctions (BDS) efforts in Florida and California.

Bramnick told JNS.org he and his followers “strongly condemn” the recent resolutions adopted by mainline Protestant denominations, such as the Lutherans and the Presbyterians, calling for divestment from Israel and a cutoff of U.S. aid to Israel.

Bramnick sees a connection between those denominations’ liberal positions on social issues and their turn against Israel. “Just as they have strayed from what the Bible says about family and social matters, so too are they disregarding what God says about the Land of Israel belonging to the Jewish people,” Bramnick said. “Once you reject God’s word on some issues, it’s only a matter of time before you do the same on other issues.”

Jesse Rojo, of the Philos Project, which educates young Hispanics about the Middle East, said that “some young Latinos are confused about Israel as a result of what they hear from the media or on campus.” Nonetheless, he added, “young Hispanics are naturally predisposed to being pro-Israel, because you can’t read the Bible and not see that God wants us to support Israel.”

Several Jewish organizations are working closely with the Hispanic pro-Israel activists.  Among the speakers at the strategy session were Betty Ehrenberg, executive director of the World Jewish Congress-North America; Jorge Diener, Hadassah’s director of special projects, and Sammy Eppel of B’nai B’rith-Venezuela, who co-chairs the Latin America division of the Global Forum for Combating Anti-Semitism.

Demographic trends suggest that Hispanic evangelicals will enjoy increasing political and social influence in the years ahead. According to Bramnick, that bodes well for Israel, “because the number of Hispanic evangelical voters is growing quickly, and for many of them, Israel is an important issue on Election Day.”

Evangelical Protestants are the largest single bloc of Christians in the United States, about 26 percent of the national population. Catholics make up 21 percent, and mainline Protestants constitute approximately 14 percent. While the evangelicals have maintained their percentage of the population in recent years, the number of mainline Protestants has been decreasing.

Although the majority of Hispanic Americans are Catholic, their numbers have been diminishing rapidly. In 2010, 67 percent of U.S. Latinos were Catholic, but by 2013 that slid to 55 percent. By contrast, Protestants–most of them evangelicals–were just 12 percent of America’s Hispanics in 2010, but reached 22 percent by 2013, according to the Pew Research Center, which tracks and analyzes religious trends in the U.S.

Hispanic adults are an increasingly potent force in American politics. California has the largest percentage of Latinos–more than one-third of its residents–which in presidential races almost always backs the Democrat candidate. But a number of presidential battleground states also have significant Latino populations. In Arizona, they constitute 21.5 percent of eligible voters. In Nevada, 17 percent, in Florida, 18 percent and in Colorado 14.5 percent.