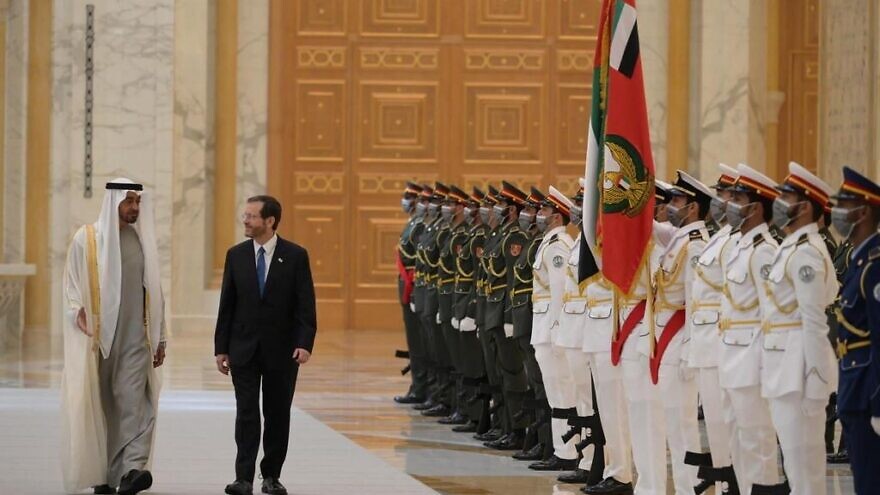 (January 31, 2022 / JNS) The United Arab Emirates intercepted a ballistic missile fired by the Houthis in Yemen early on Monday, according to the UAE Defense Ministry.

The missile was intercepted right after midnight, according to the ministry. The missile debris fell in an uninhabited area, causing no damage or casualties. There was no indication as to whether the missile was aimed at Abu Dhabi or Dubai.

The attack—the third on the UAE by Houthi terrorists in the past two weeks—occurred as the country hosted Israeli President Isaac Herzog and his wife, Michal Herzog.

“We are determined to achieve our goals and strategic vision towards contributing to building a stable and prosperous region for all, and provoking us will not work,” tweeted senior Emirati official Anwar Gagash in response to the attack.

“We do not see the threats and fantasies of terrorist organizations based on illusions as more than a passing matter that will be dealt with in a manner that guarantees our security and national sovereignty. It is wrong for those who test the Emiratis,” he added.

Herzog and Abu Dhabi Crown Prince Sheikh Mohammed bin Zayed Al Nahyan discussed the UAE’s security situation on Sunday, with the president condemning the fatal Jan. 17 Houthi missile and drone attacks on the country. Herzog said Israel was committed to supporting the UAE’s security requirements against the Iran-backed Houthis in Yemen, though he did not elaborate.

On Jan. 24, UAE fighter jets destroyed a missile-launcher in Yemen shortly after it was used by the Houthis to launch two ballistic missiles at Abu Dhabi. Those missiles, too, were successfully intercepted by the UAE’s air-defense systems, and caused no damage or casualties, according to the UAE Defense Ministry.

“We are here together to find ways and means to bring full security to people who seek peace in our region,” said Herzog on Sunday.

The Israeli president was in Abu Dhabi for meetings on Sunday and headed to Dubai on Monday to visit the country’s Expo 2020.

The UAE is part of a Saudi-led coalition fighting the Houthis, who have also repeatedly targeted Saudi Arabia.