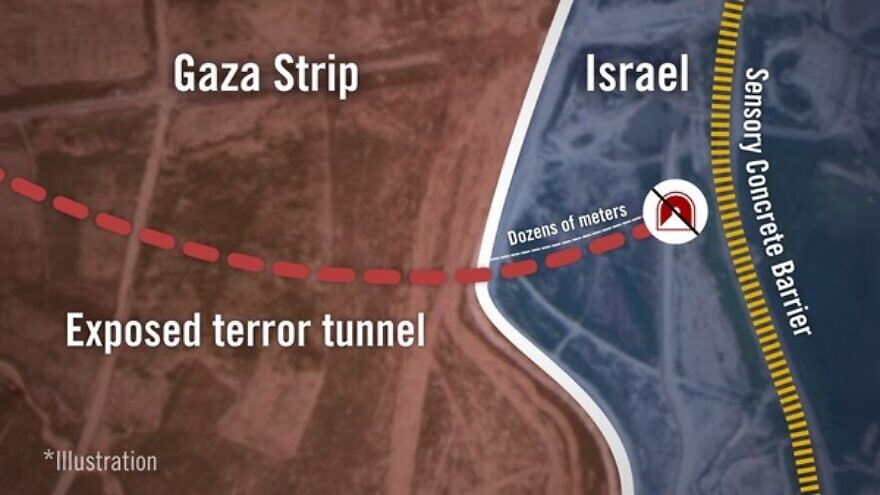 (October 20, 2020 / JNS) The Israel Defense Forces announced on Tuesday that it has uncovered a terror tunnel from the Gaza Strip that ran dozens of meters into southern Israel.

“The route [of the tunnel] was located as part of the ongoing efforts to find and neutralize tunnels, and thanks to the technological and [intelligence] collection capabilities of the barrier,” the IDF said in a statement, referring to an underground barrier system the IDF is installing along the Gaza-Israel border to prevent tunnels.

The IDF, which said it would destroy the tunnel, did not indicate the terror group involved. Nevertheless, Jerusalem holds Hamas, the de facto ruler in Gaza, responsible for terrorism from the coastal enclave.

“The IDF is determined to defend Israel’s sovereignty and the security of its citizens, and will continue to act against terror—above and below ground—in every area where it may be required,” said the IDF.

The Gaza Strip has been quiet in recent weeks since terror groups fired more than a dozen rockets at southern Israel on Sept. 15, which coincided with the signing of the normalization deals with the United Arab Emirates and Bahrain.

Defense Minister Benny Gantz, who inspected the construction of the underground barrier, said that despite the recent quiet, “beneath the surface, terrorist organizations continue their efforts to harm Israeli citizens and our sovereignty.”

However, after the announcement of the tunnel, on Tuesday evening the IDF said that at least one rocket was fired towards Sderot; it appeared to have been shot down.

The IDF said it was investigating the incident.