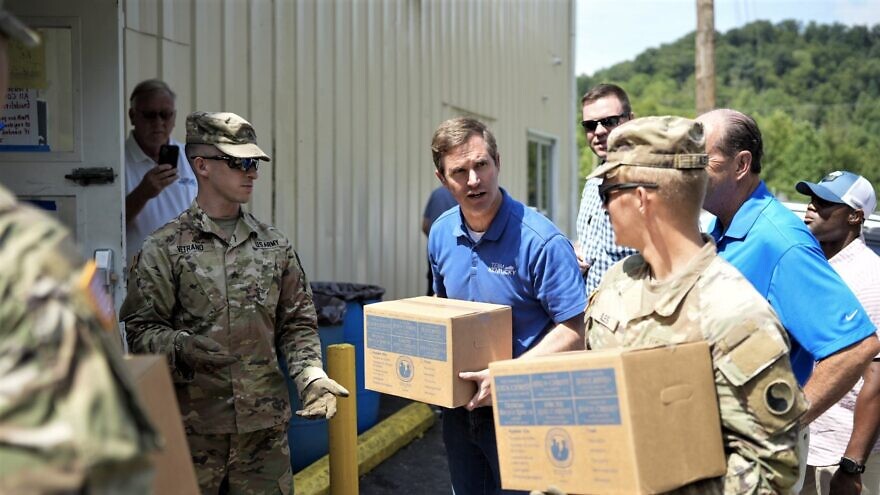 (August 3, 2022 / JNS) Kentucky Gov. Andy Beshear and his wife, Britainy, canceled a planned trip to Israel after devastating floods hit the eastern part of his state late last week, killing at least 37 people, including four children—a number that is expected to rise in the next few days.

“I cannot be overseas while the people of eastern Kentucky are suffering and while the region will be in a critical stage over the coming weeks,” the governor said on Monday as he pitched in to help at home. “I promised the people yesterday that I would be there for them—today, tomorrow and in the coming weeks—and I am going to keep that promise.”

As of Monday afternoon, more than 12,000 people were without power and more than 30 water systems were having issues related to power or flooding. Additionally, hundreds of homes were destroyed in an area that suffers from extreme poverty with rates of more than 20% in many areas, according to U.S. Census figures.

U.S. President Joe Biden declared the area a disaster zone on July 29, allowing for federal aid to the Commonwealth of Kentucky.

The State of Israel is among those sending aid to help with relief efforts in Kentucky through Chabad of Kentucky’s social-service arm, Project Friendship, which provides clothing, shoes and household goods to people in need. Chabad delivered more than $100,000 worth of supplies to eastern Kentucky on Monday alone.

Anat Sultan-Dadon, Israel’s Consul General for the Southeastern United States, said that “our thoughts are with all those impacted by the flooding disaster in Kentucky. We send our sincere condolences to those who have tragically lost loved ones and wishes for a speedy recovery for all who have been impacted.”

“At this difficult time,” she continued, “Israel stands with the people of Kentucky, and our consulate is grateful to be able to join in an effort of offering some assistance to those in need.”