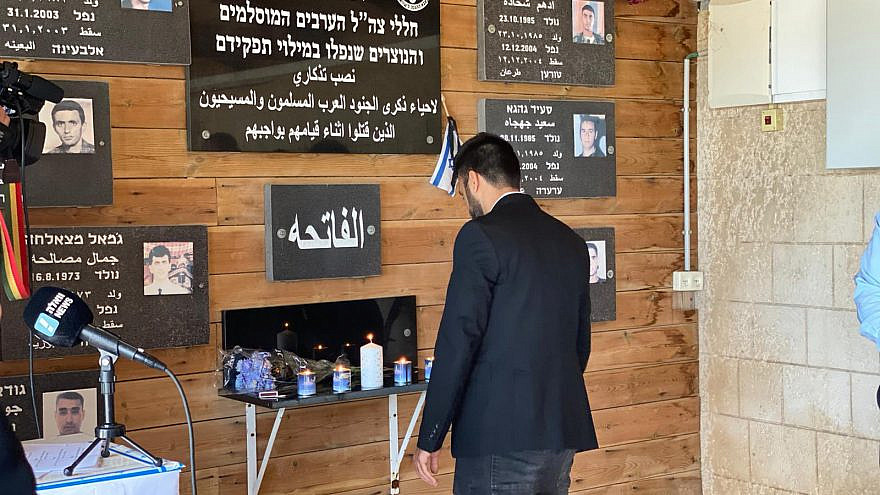 (April 14, 2021 / Israel Hayom) In a historic first, a Memorial Day ceremony was held on Tuesday to commemorate fallen Arab soldiers of the Israel Defense Forces.

The event, which took place in the Arara village in the Negev Desert, was organized by the “Together-Vouch for Each Other” group—whose mission is “connecting the Arab sector to Israeli society”—in cooperation with the Israel Police.

Yusuf Jahaja, the father of the late Sgt. Sa’id Jahaja, who fell during an operation in Rafah in 2004, spoke at the ceremony, as did Maj. Hisham Abu Ria, the first Arab-Muslim officer in the IDF; Druze social activist Lorina Khatib; and “Vouch for Each Other” CEO Yoseph Haddad, a Christian-Arab Israeli.

During the ceremony, four candles were lit to commemorate the fallen Jewish, Muslim, Christian and Druze soldiers. A fifth candle was lit to symbolize hope for unity and peace within Israeli society.

“It is moving to hold the Memorial Day ceremony in the Arab sector,” said Haddad. “Arab soldiers should be remembered among the rest of Israel’s fallen soldiers and victims of terrorism.

“This is a sad and painful day for all of Israeli society. On this day, we all must bow our heads and remember the heroes that fell for our country, and make sure to guard it and make it better and more united,” he added.