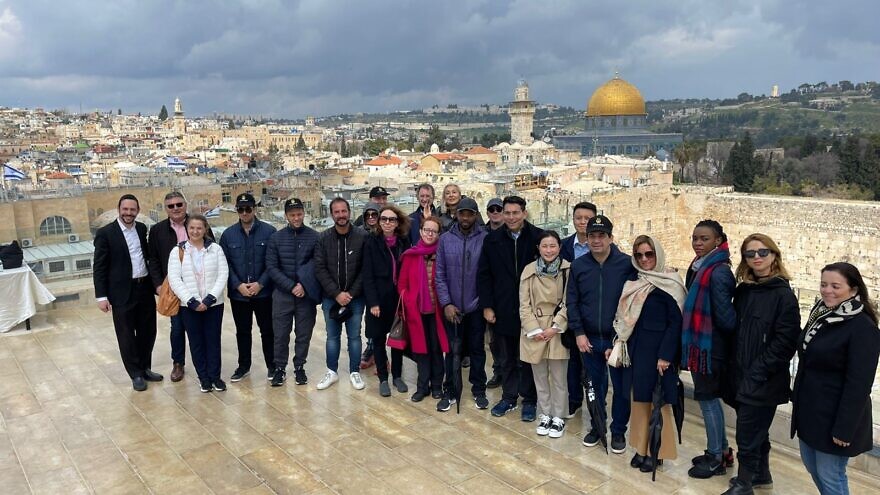 (April 5, 2022 / JNS) Israel recently hosted an international delegation from several countries on the third leg of a fact-finding mission that also visited two of the signatories of the Abraham Accords: the United Arab Emirates and Bahrain.

Former Israeli Ambassador to the United Nations Danny Danon, currently the chairman of World Likud, told JNS that the mission was supposed to have taken place in 2021, “but the coronavirus restrictions meant that it had to be postponed.”

The mission welcomed international dignitaries such as vice presidents, foreign ministers and senior officials from other countries, including Paraguay, Liberia and Argentina, among others, according to Danon. One of the key drivers of the mission, he said, was to showcase regional technology and know-how “founded on coexistence.”

“We wanted to highlight multilateral and multi-layered cooperation—not only between the Emirates and Israel, but also between Manama and Jerusalem,” he said.

Chatardová, who visited Dubai for the first time as part of the mission, said “what was most impressive to me is that these agreements go beyond mere symbolism; there has been a deep and positive impact. There are clearly opportunities for cooperation in the present, and the Abraham Accords can be seen as a template for the future.”

Echoing a sentiment that has been clear for some time on social media and in the real world, the level of people-to-people interaction struck a chord with the Czech ambassador.

“I talked with young Bahraini students at the King Mohammed Center for Peaceful Coexistence, and they spoke of their interest in going to Israel with great enthusiasm,” she said.

Meanwhile, Panayotov noted that it was “amazing how the Abraham Accords had so successfully managed to overcome mistrust and hatred between people. We must take a moment to applaud the will, vision and wisdom of the respective leaders who facilitated it. In addition, [its] implementation should act as an example of how misunderstandings between nations should be solved. Israeli and Arab partners should and must serve other leaders.”

Danon cited Israel’s long-standing peace agreements with both Egypt and Jordan, which have held for 43 and 28 years, respectively, acknowledging that the Jewish state was “proud of our relationships with them.”

He added that “we have all seen the development of our ties with the Emirates, but there are more Israelis—businesses and students, for example—who are also going to Bahrain.”

The delegation took place against the backdrop of at least two major ongoing international situations: the war between Russia and Ukraine in Eastern Europe, and U.S. President Joe Biden’s administration’s push to re-enter the nuclear deal between Iran and the world’s major powers, formally known as the Joint Comprehensive Plan of Action (JCPOA).

Danon maintained that “Iran is the major cause of instability and chaos in the region, and we must enhance the forces of stability. The sane voices in the Middle East are united in acknowledgment of how important the Iran issue is—not just in Israel and the UAE, but also in Bahrain. If there will be an agreement, then there will certainly be united voices from the region.”

‘There is great potential here’

One of the ways in which this could clearly be achieved, as the ambassadors suggested, is through the example of the Abraham Accords.

“There is great potential here,” said Chatardová. “Economic prosperity is very important, and the spillover effect of this and other positive results of peace and cooperation can bring other investments. The Abraham Accords show how sharing best practices can quickly encourage economic activity, bridge relations and foster genuine peace between peoples.”

Panayotov explained that in his country and throughout the European Union, there was “steadfast support” for the Abraham Accords and “no misunderstanding about how powerful a tool they are.” There could have been some “legitimate skepticism” about their implementation, but still, “they’re working well,” he said.

“They show the way forward. What starts with trade development relations develops into tourism, people-to-people contacts and even security cooperation,” he added.

Danon concluded that “the Abraham Accords will be a platform for activities in the region, food security and other economic issues. Countries like Paraguay (Vice President Hugo Velázquez joined our mission) will open an embassy in the UAE in the next few weeks. [Representatives of Liberia] were supposed to come, but they are in the UAE opening an embassy. There is an understanding that this cooperation is beneficial for their future, and I’m optimistic for other countries joining the club of peace.”

Indeed, last month, the Central African Republic and Bahrain established diplomatic relations for the first time. As the sands of the existing world order are shifting, formerly non-aligned countries have begun increasingly relying on each other.

Chatardová said that the Abraham Accords were “the first step” towards greater cooperation in the region.

“I would like to see more cooperation in all fields and not just between current signatories. There is the potential that other countries can join these accords,” she said.