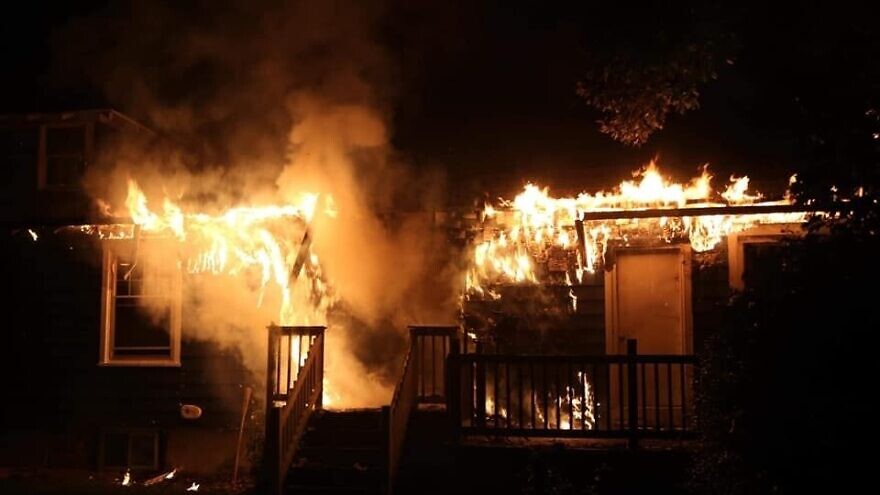 (August 27, 2020 / JNS) A fire at the Chabad House at the University of Delaware in Newark has been ruled an arson, according to investigators.

The Chabad center will need to be completely demolished and rebuilt, Rabbi Motti Flikshtein, program director at Chabad of Wilmington, told JNS.

According to Flikshtein, the arson was not a case of anti-Semitism, as the University of Delaware Chabad was one of a number of buildings that have been set ablaze by a serial arsonist in the area.

A fundraising page has been set up to help rebuild the Chabad. As of press time, it has raised more than $52,500 with a fundraising goal of $75,000. And a criminal investigation is ongoing.

Classes at the university are scheduled to begin next week.

“The attack at the University of Delaware is a stark and painful reminder that anti-Semitism is alive and well in the United States in 2020,” said Orthodox Union executive director for public policy Nathan Diament in a statement. “Even in the midst of a pandemic, there is no time to pause our vigilance against such heinous acts of anti-Semitism. We must continue to do everything we can to protect the Jewish community against those who seek to do us harm.”

Rabbi Jacob Lieberman, president of Delaware Rabbis and Cantors, and Seth J. Katzen, president and CEO of the Jewish Federation of Delaware, said in a statement that “while this heinous act of intentional damage and destruction has yet to be and may not be determined by our local authorities to be a hate crime, our Jewish community is nonetheless alarmed by this act of aggression against one of our communal institutions.

“At a time when anti-Semitism is on the rise, an incident like this, whether officially a hate crime or not, touches many of us in a deeper way as trauma,” they said. “It is upsetting to learn that any Jewish community has been intentionally harmed through arson or vandalism, let alone one in the heart of our very own community.”

In a statement, Newark Mayor Jerry Clifton said “it is heartbreaking to learn the fire at the Chabad center was set intentionally.”

“This is a sickening act of hostility that threatens the safety and security of our inclusive, welcoming neighborhoods. My thoughts are with the Jewish community and those affected by this tragedy,” he continued. “I have faith that the Newark Police Department and partner agencies will work tirelessly to identify the individual or individuals responsible and bring them to justice.”