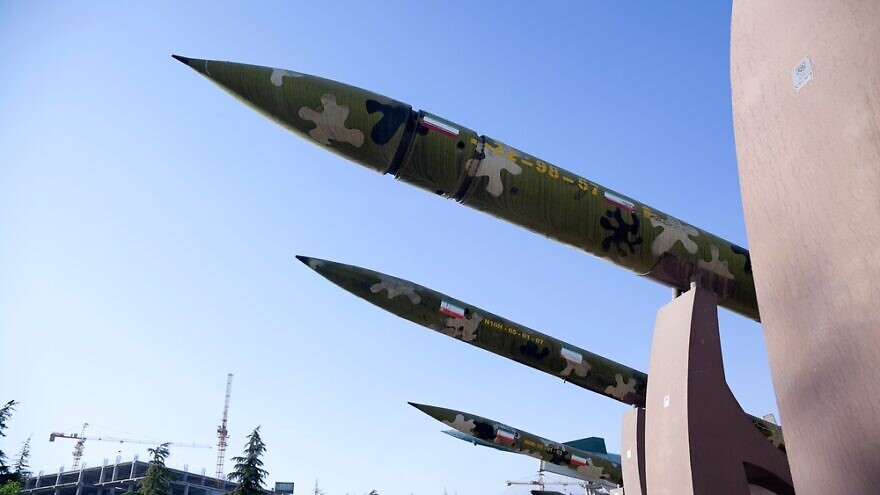 (March 15, 2022 / JNS) The 12 ballistic missiles fired from an Iranian base at Erbil, in the northern Kurdish region of Iraq, constituted a display of capabilities by the Islamic Republic, which were intended to intimidate but not to spark a war at this time.

In true to form Iranian calculated brinkmanship, the missiles—fired from the Kermanshah region of Iran—covered some 340 kilometers (215 miles) and likely were medium-range Fatah 110 ballistic missiles, according to an analysis by the Alma Center, an Israeli defense watchdog.

“If these missiles had landed in a crowded urban area, they would have caused considerable damage,” noted Alma, stating that the missiles were likely precision-guided projectiles. The fact that these missiles, carrying a half-ton warhead, didn’t slam into populated areas is likely no coincidence.

The Islamic Revolutionary Guard Corps (IRGC) claimed that the missiles targeted a Mossad headquarters in Erbil. The missiles hit an empty building not far from the American Consulate in Erbil.

In taking this action, the Iranians exhibited their advanced precision-guided missile capabilities, trampled Iraq’s sovereignty with immunity and sent out warnings to multiple recipients.

The first intended recipient appears to be Israel itself, which is threatened by Fatah 110 ballistic missiles in the possession of Hezbollah in Lebanon. The message appears to come in response to the March 7 reported Israeli airstrike that Iran said killed two IRGC officers in Damascus.

In deciphering the warning, Alma assessed that the messaging to Israel is that “Iran will fire ballistic missiles directly at cities in Israeli territory next time.”

A second target audience is likely the United States and the international community.

Iran is visibly frustrated by the delay of the signature stage in the Vienna nuclear talks, which is the result of a last-minute Russian maneuver to demand that it receives exemptions from sanctions placed on it and assurances that it can do business with Iran.

The demand means that an agreement that has reached its final stage cannot yet be signed, and painful American sanctions that the Iranians believed would soon be lifted remain unless either Russia changes its position, or the United States finds a new way to sign the agreement without Russia. That is easier said than done, due to Russia’s key role in the intended agreement, which includes importing excess Iranian uranium and overseeing the conversion of the Fordow nuclear site into a research center.

What better way does Iran have to warn Washington to find a solution to this impasse than to “fire across its bow” with powerful, guided ballistic missiles near the U.S. consulate?

As the nuclear talks remain stalled, Iran is making alarming progress on the uranium enrichment front, and if it concludes that the agreement cannot be revived, it may be tempted to push through to breakout status.

A third target audience likely represents Iran’s regional Sunni Arab rivals, particularly the Gulf states. Saudi Arabia—and more recently, the United Arab Emirates—is experiencing attacks by the Iranian-backed Houthis from Yemen in the form of ballistic, cruise and UAV attacks. The display of powerful firepower in Iraq will not be lost on that country either.

The Iranian display of capabilities continued on Monday, when, according to Reuters, Iranian state television reported that security forces had “thwarted planned sabotage at the country’s major Fordow nuclear site by a network recruited by Israel, and arrested those involved.”

According to the report, “the television said an Israeli officer first contacted a neighbor of an employee of the uranium enrichment plant and managed to recruit them after paying them in cash and digital currency. The Revolutionary Guards security unit was monitoring this network and was able to break it up before the sabotage could be carried out, arresting an unspecified number of people, the television said.”

Soon after that Iranian claim, the IRGC’s Telegram channel posted a message in Hebrew saying “surprise,” according to Ynet. Within half an hour, a cyber attack targeted several Israeli government websites and crashed in an apparent distributed denial of service (DDoS) attack, in which servers are flooded with false visitors.

Israeli Minister of Communications Yoaz Hendel held an emergency assessment as Israel restored its sites and placed them back online.

This, too, appears to represent an Iranian display of capabilities; though here as well, the attack was limited and didn’t cross the threshold of war, at least at the time of this writing.

Iran’s brinkmanship is often calculated to achieve specific aims without endangering the regime’s core interests, though as the events leading up to the U.S. assassination of Quds Force Commander Qassem Soleimani in January 2020 indicate, the Iranians are perfectly capable of miscalculating.

One unmistakable lesson that can be taken away from recent events is that Iran is investing in a serious arsenal of firepower, and that it is exporting these capabilities to its proxy terror armies throughout the Middle East.

The larger that Iran’s firepower grows, the more self-confident it is likely to become, and the more likely it becomes that it will once again miscalculate, particularly against Israel.