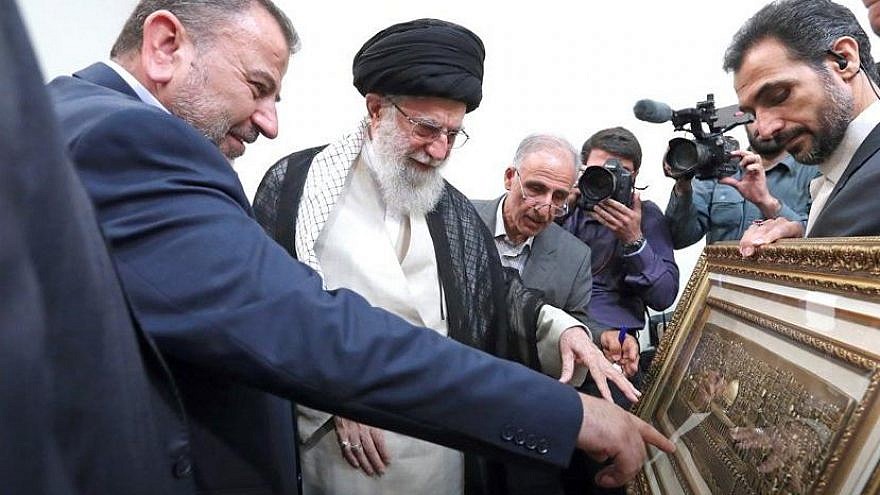 (November 14, 2022 / JNS) Germany’s tight business and political ties with the Islamic Republic have long been a popular topic of discussion in the Federal Republic. The Wall Street Journal wrote a series of biting editorials in 2008 about the bond titled: “Germany Loves Iran.”

The clerical regime has murdered more than 300 people during the nationwide protests that began in mid-September; Germany joined the European Union on Monday in imposing sanctions on the mullahs.

Even Foreign Minister Annalena Baerbock—who comes from the largely pro-Iran regime Green party—declared on Monday with respect to the sanctions: “Nobody in Tehran, Mashhad or Isfahan can be allowed to believe that they can get away with committing crimes without consequences.” She added that “Europe and the world are watching.”

The violent crackdown, including the arrest of more than 14,000 protesters, came in response to the outrage over the state’s alleged murder of Mahsa Amini, 22, for failing to “properly” cover her hair.

The E.U. and Germany, the main economic engine behind the European alliance, targeted in the sanctions 29 individuals and three organizations, including the “inner circle” of the Islamic Revolutionary Guard Corps (IRGC).

In contrast to the United States, the E.U. did not designate the entire IRGC as a terrorist organization. The U.S. State Department has classified Iran’s regime as the worst state-sponsor of terrorism. Former Secretary of State Mike Pompeo said the Islamic Republic is the top state-sponsor of antisemitism.

Kazem Moussavi, a prominent German-Iranian dissident, told JNS, “It is unfortunate that the Revolutionary Guards, which are primarily responsible for the arrests and killings of protesters in Iran, are still not sanctioned as a terrorist organization. The Revolutionary Guard also organizes the regime’s nuclear missile projects with the aim of destroying Israel.”

He continued that “Germany and the E.U. obviously continue to rely on the continuation of the nuclear deal with the murderers in Tehran and thus on the survival of the mullah regime.”

The E.U. and the Biden administrations are seeking to provide sanctions relief to Tehran in exchange for the promise of temporary restrictions on its nuclear weapons program.

According to Saeed Ghasseminejad, an Iran expert at the Foundation for Defense of Democracies, the proposed new nuclear deal “would allow Tehran to access up to $275 billion in financial benefits during its first year in effect and $1 trillion by 2030.”

Moussavi said, “In order to actually do justice to the ‘feminist foreign policy” for “Women, Life, Freedom” announced by Annalena Baerbock, the leaders of the regime, “[Supreme Leader] Ali Khamenei, [President] Ebrahim Raisi and the Revolutionary Guard in their entirety, who are responsible for the murder of Mahsa Amini and countless others, must be put on Germany’s terror list, regardless of the E.U.’s Iran policy.”

The slogan “Woman, Life, Freedom” has become the battle cry of the nationwide protests against the Islamist government.

Sheina Vojoudi, an Iranian woman who fled to Germany to escape persecution, told JNS that “since the ‘bloody November’ [2019] we’ve been waiting for Germany to choose the right side of history and cut its ties and negotiations with the Islamic Republic which massacred more than 1,500 innocent Iranians including children in just three days. At that time we expected Germany to take a position and choose human rights over its business with the mullahs who are actually making deals with other countries with our wealth.”

Vojoudi, a spokeswoman for the Senate of the National Iranian Congress (NIC), added, “The Islamic Republic always threatens those who stand up against its crimes and malign activities. We always warned the JCPOA [Joint Comprehensive Plan of Action, or Iran nuclear deal] members to stop the negotiations with the Islamic Republic because in the end it will also burn you.

Berlin has been one of the main proponents of the JCPOA. If sanctions are lifted against Iran, Germany is positioned to secure many billion dollars worth of new trade.

German media and the London-based Iran International news organization reported that the Dusseldorf-based Softqloud IT firm is working with the Iranian regime to censor content on the internet. Iran International reported that “Softqloud GmbH is a branch of Arvancloud or Abr Arvan, an Iranian company which helps to disconnect the internet in Iran.”

Vojoudi said, “We’ve always criticized German foreign policy towards Iran. We understand that Germany wants to preserve its own benefits but if Germany claims to be a country that respects and defends human rights, it must change its ways.”

Both Moussavi and Vojoudi have urged Freiburg Mayor Martin Horn to pull the plug on the twin city partnership with Isfahan.

Horn has refused. Amnesty International recently took him to task for his statements in support of the partnership with a regime in Isfahan that is gunning down protesters.

The German Foreign Ministry–funded German-Israel Friendship Society (DIG) urged Horn to suspend the partnership. When asked if DIG plans to mobilize its roughly 5,000 members to mount a protest in Freiburg, the society declined to comment.

German banks have long helped to keep Iran’s battered economy on life support. Banks in the state of Baden-Württemberg facilitate transactions for trade between the regime and German business, many of which are engineering companies.

According to a German media report, Volksbank Konstanz and Volksbank Schwarzwald-Donau-Neckar both refused to comment on their Iran business. JNS sent press queries to the banks but they went unanswered.

When asked why LBBW’s chief economist, Moritz Kraemer, seems to welcome Iran gas imports in a statement on the LBBW homepage, Wagner said, “There seems to be a misunderstanding. The chief economist is talking about the national economy, not about LBBW’s business. We have a very clear distinction here.”

Kraemer commented on the webpage, “Intensive talks are already being held behind the scenes with Venezuela, Iran or Algeria to cover Germany’s oil and petrol needs.”

Also based in Baden-Württemberg, the Krempel company sold Iranian businessmen material that was used in Iranian chemical missiles. The rockets poisoned dozens of civilians, including children, in a 2018 attack in Syria.

When asked whether Baden-Württemberg will crack down on trade between Iran and companies in the state, the administration of Green party governor Winfried Kretschmann refuses to comment.

Baden-Württemberg’s state commissioner tasked with fighting antisemitism and defending Israel’s security, Michael Blume, declined to comment on the issue. A court in Hamburg ruled in October that a number of Blume’s statements can be called antisemitic and that he can be designated as “antisemitic.”

JNS previously reported on the calls for Blume to resign due to his alleged anti-Israel activities and antisemitism.

The Khamenei-controlled Islamic Center in Hamburg and its Blue Mosque have also evoked concern. Hamburg’s city-state government has failed to heed warnings and demands to shutter the center and the mosque. The Islamic Center of Hamburg is “Iran’s long arm in Europe” and has “links to a terrorist organization,” Die Welt reported.