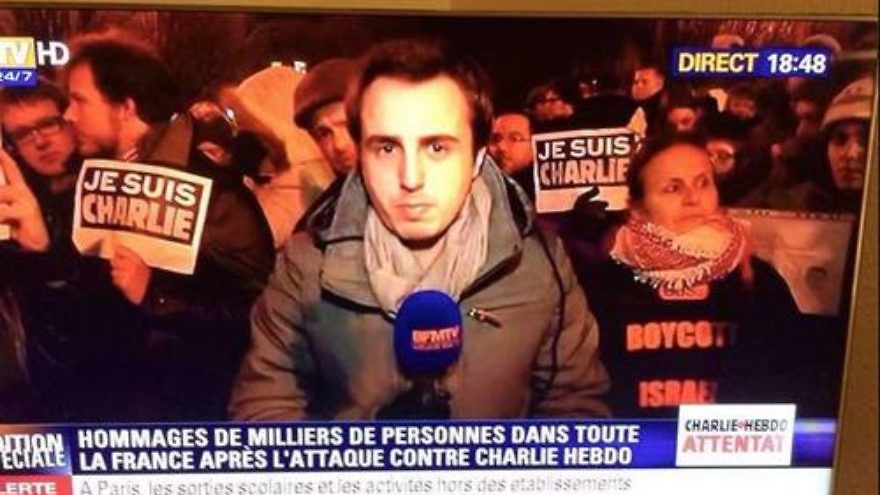 In this image circulating on social media depicts a news report from the scene of a mourners’ rally for the murdered Charlie Hebdo journalists, a woman (pictured on the right) behind the reporter is seen wearing a shirt with the wording “Boycott Israel,” seemingly making the statement that Israel is somehow to blame for the attack on the magazine. Credit: Facebook.
Republish this article
1183 WORDS
Spread the word.
Help JNS grow!
Share now:

(January 11, 2015 / JNS) In a traumatic week for Paris that saw the murders of 12 people at the satirical magazine Charlie Hebdo, four hostages killed at a kosher supermarket in Porte de Vincennes, and a police officer executed in Montrouge—all coming at the hands of Islamist terrorists—the violence was accompanied by the usual anti-Israel conspiracy theories.

Brothers Cherif Kouachi and Said Kouachi, the two Muslim terrorists suspected of carrying out the Charlie Hebdo shooting—were killed Friday in a police raid on a printing shop in the Paris suburb of Dammartin-en-Goele, where the Kouachi brothers had taken one man hostage. A separate but simultaneous raid killed Islamist terrorist Amedy Coulibaly, who took nearly 20 hostages at Hyper Cacher (the kosher supermarket) on Friday and had killed a female police officer on Thursday. Fifteen of Coulibaly’s hostages were freed. According to French police, Coulibaly was a close associate of Cherif Kouachi and may have been involved in the Charlie Hebdo attack.

Since the March 2012 attack in which Mohammed Merah killed three children and a rabbi at Jewish school in Toulouse, the threat of Islamic terrorism has not let up for Jews and the general public in France.

“The Jewish community of France is scared, grieving, and fearing for members of its community, for France, and for the values of our Republic,” Simone Rodan-Benazquen, director of the Paris branch of the American Jewish Committee, told JNS.org. “Unfortunately, we are not surprised with what just happened because for 14 years, the Jewish community has been the main target of these barbaric attacks. Targeting French people because they are Jews is attacking the Republic, more than ever, and the last two attacks  [on Charlie Hebdo and the kosher supermarket] are once again proof [of that].”

B’nai B’rith International Executive Vice President Daniel S. Mariaschin told JNS.org that those outside of France and Europe should “call on leadership to really begin to address this growing menace” of Islamism.

“These threats are threats [not only to Jews but also] to the democratic fabric of post-war Europe,” Mariaschin said, adding that European leaders cannot go on much longer without well-organized efforts to deal with the problem.

Rabbi Abraham Cooper, associate dean of the Simon Wiesenthal Center, told JNS.org, “The time has come to call out all 1,000 imams in France and demand to know where they stand on the Islamists.”

Israel’s opponents often drag the Jewish state into world events in which it has no involvement, and the Charlie Hebdo attack was no exception. After the magazine shooting but before Friday’s hostage crisis at the kosher supermarket, Greta Berlin, the spokesperson for the Free Gaza movement—a Boycott, Divestment and Sanctions (BDS)-affiliated organization committed to breaking the Israeli blockade of Gaza—floated an unfounded theory on Facebook that “MOSSAD (Israel’s intelligence agency) just hit the Paris offices of Charlie Hebdo in a clumsy false flag designed to damage the accord between Palestine and France.”

“Here’s hoping the French police will be able to tell a well-executed hit by a well-trained Israeli intelligence service and not assume the Muslims would be likely to attack France when France is their friend,” she wrote. “Israel did tell France there would be grave consequences if they voted with Palestine. A four-year-old could see who is responsible for this terrible attack.”

The Charlie Hebdo shooters were radical Muslims who shouted “Allahu Akbar” as they shot the French magazine’s journalists. There was no trace of Israel involvement. But that did not stop Free Gaza movement co-founder Mary-Hughes Thompson from mimicking Greta Berlin, posting on Twitter, “#Hebdo killings indefensible. Can’t help thinking #JSIL Mossad false flag though. Killers spoke with perfect French accents. Time will tell.”

Thompson’s usage of #JSIL refers to the “Jewish State in the Levant” campaign that seeks to equate Israel with the Islamic State terror group, which is also known by the acronyms ISIL and ISIS.

Dr. Daniel Pipes, president of the Middle East Forum think tank, has written two books about conspiracy theories. He told JNS.org, “The fevered imagination of far-left and far-right have invariably blamed one or the other of two conspirators: a secret society or the Jews.”

“Every high-profile [case] with some element of violence and mystery comes back to these two, even the disappearance of a Malaysian airplane,” Pipes said.

“These particular charges are absolutely reprehensible,” said B’nai B’rith’s Mariaschin. “They are inflammatory. It shows that these groups will go to any length to demonize Israel. … It also shows the great challenge that Israel and its supporters are facing—when even at a moment like this, the BDS crowd will engage in this kind activity.”

The Wiesenthal Center’s Cooper expressed “utter disgust at the blatant Jew-hatred” emanating from the BDS movement.

“I hope people understand that BDS has nothing to do with helping Palestinians,” he said.
“They have one goal: to demonize [and] weaken the democratic state of Israel.” Regarding the conspiracy theories, Cooper lamented that “these big lies are alive and well on the sub-culture of the Internet.”

A mainstream news organization, the International Business Times, picked up on the Free Gaza conspiracy theory, publishing a story that asked, “[Is] Israel Venting Its Fury for France’s Recognition of a Palestinian State?” The story was quickly removed and replaced with an apology stating that the piece “should never have been published and we have therefore removed it from our site.”

“The story was beneath our standards and we apologize for this basic lapse in judgment,” stated the International Business Times.

CNN anchor Jim Clancy, meanwhile, tweeted in reference to the Charlie Hebdo shooting that two Twitter accounts—@elderofziyon (for the popular Jewish-themed blog) and the anti-Semitic handle @JewsMakingNews—are colluding to promote an anti-Muslim and pro-Israel agenda. He later deleted some of the controversial tweets.

According to the media watchdog Honest Reporting, when confronted about his claims, Clancy tweeted, “@HumanRights2K Get a grip, junior. It’s my Friday night. You and the Hasbara (Hebrew from public diplomacy) team need to pick on some cripple on the edge of the herd.”

Additionally, in an image circulating on social media that depicts a news report from the scene of a mourners’ rally for the murdered Charlie Hebdo journalists, a woman behind the reporter is seen wearing a shirt with the wording “Boycott Israel,” seemingly making the statement that Israel is somehow to blame for the attack on the magazine.

“Conspiracies are always dangerous… this kind of intrusion into the reaction to what’s happened in France could be happening anywhere in Europe, and it’s not only limited to Europe,” Mariaschin said. “It also relates to the overall geopolitical situation in terms of where Europe stands on many issues, [such as] the Israeli-Palestinian issue.”

In addition to its modern problem with radical Islam, Europe “remains haunted by its historic demons,” said Middle East Forum’s Pipes, who isn’t optimistic that the anti-Israel conspiracies will subside.

“It does not seem likely that this wretched tradition will ever change,” he said.