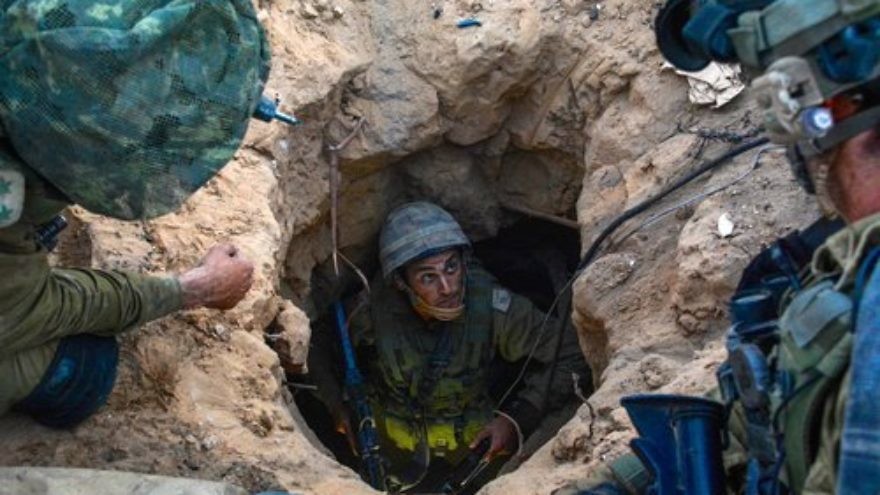 (November 27, 2017 / JNS) Within two years, a deep underground wall, equipped with advanced sensors, will cut through Hamas’s ability to tunnel into Israel.

That will lead southern Israeli villages and towns to breathe a collective sigh of relief. But the Gazan terrorist factions that are currently arming themselves are likely already thinking about new ways to target Israelis.

The IDF and Israeli Defense Ministry are working around the clock to complete the new underground wall. It will stretch 65 kilometers (40 miles) from north to south, across Israel’s entire border with Gaza.

In the past, the ability to inject heavily armed, well-trained terror squads into Israel via attack tunnels formed a key ability in the hands of Gaza’s factions. Hamas and Palestinian Islamic Jihad (PIJ) poured considerable treasure, sweat and blood (many diggers died when tunnels collapsed on them) to create them.

Some of the tunnels branch out into multiple exit shafts. They are often built with small rails and wheeled cars for shifting weapons around, ventilation systems, an electrical supply, and rooms for storing weapons and uniforms. Some even had motorcycles parked inside.

But by 2019, the underground barrier will make it extremely difficult, if not impossible, for terrorists to infiltrate Israel by traveling underground.

The wall is being complemented by a new IDF tunnel detection system. This is being used with increasing success by the military’s Southern Command to discover and destroy tunnels.

The most recent example of this scenario was the detonation of a PIJ tunnel in late October, an operation that killed around 15 diggers and those who tried to rescue them.

The underground barrier is being constructed by Israel entirely on its own side of the border. It represents a significant Israeli gain in the high-stakes game of cat and mouse against Gaza’s terrorists, but it is not the final word.

“In the ongoing campaign between Israel and Palestinian terrorist organizations, a competition is always happening, on learning how to utilize technological developments, and formulating new strategies and doctrines for action,” Prof. Boaz Ganor, executive director of Israel’s International Institute for Counter-Terrorism, told JNS.org.

“The terror organizations are trying to find new techniques and means to conduct attacks, and Israel is trying to develop new technologies and strategies for defense and attack,” Ganor said. “The challenge posed by tunnels committed Israel to finding a technological solutions to prevent infiltration into its territory. The more Israel is successful in preventing the digging of tunnels into its territory, it is reasonable to assume that the terror organizations will search for techniques and means that will help them overcome the new barrier.”

Those could include attempts to infiltrate Israel through the sea or air, or to dig deeper tunnels running underneath the new barrier, he added.

In fact, according to the Southern Command’s assessments, Hamas has been working to build new short-range rockets that are not very accurate, but do carry a massive warhead, inspired by projectiles used with devastating effect by warring sides in Syria. Such a rocket could destroy whole buildings in a direct impact.

In addition, the terror factions could try to set up new operations out of Judea and Samaria (commonly known as the West Bank), away from Gaza, Ganor said.

“One must remember that despite all of the difficulties they have in getting organized in Judea and Samaria for the purpose of conducting an attack, these terror organizations do have the ability to transfer their infiltration efforts, for example to kidnap soldiers and civilians, from the Gaza Strip to Judea and Samaria,” he said.

Meanwhile, above ground on the Gaza border, Israel is working on completing another project—an eight-meter (26-foot) tall fence, complete with high masts that hold radars, and far-reaching day and night cameras.

The above-ground barrier will deliver early alerts on any suspicious movement, giving the IDF a timely heads-up about the approach of terror cells. It is modeled on the advanced barriers built along Israel’s borders with Egypt and Syria.

The underground wall can also deliver real-time alerts. They will be sent to military control centers that are popping up along the border. These centers are staffed 24 hours a day by dedicated IDF operators, and equipped with advanced automatic threat detection computer systems.

The centers could, for example, request action against tunnels detected by the wall’s advanced sensors, deep underground. The IDF has additional ways of keeping a close watch on Gaza, including drones, surveillance flights and field units deployed in camouflage throughout the border, which can call in supporting fire when they detect threats.

A pilot program for the underground wall started in the summer. In September, intensive work began to complete the project as soon as possible.

Currently, Defense Ministry employees are working around the clock, pouring cement onto a superstructure deep underground. Hamas and the other terror organizations are watching the work unfold, but are not intervening.

In August, Maj.-Gen. Eyal Zamir, who is in charge of the Southern Command, told reporters that the underground barrier will “prevent the digging of tunnels into our territory. It is advancing according to plan. In the coming months, this project will be significantly accelerated. We will see an expansion of the scope of works…We very much hope we will not be challenged while working on this project.”

Prof. Uzi Rabi, director of the Moshe Dayan for Middle Eastern and African Studies at Tel Aviv University, said the new wall could contribute to Israel’s deterrence power, but that this deterrence would always be limited.

“It could restrain those who can be restrained,” Rabi told JNS.org.

“But since there are peripheral organizations among them [in Gaza] who view conflict against Israel as the axis of their existence,” he said, “these groups will channel their negative energies to find no less lethal options.”