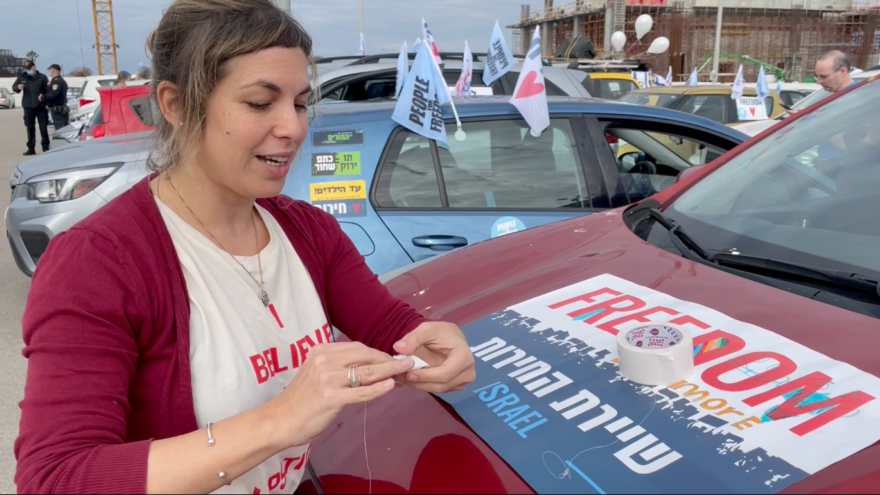 (February 20, 2022 / JNS) On Feb. 14, Israeli truckers gathered at Latrun, a historic battleground on the way from Tel Aviv to Jerusalem. The choice of location was more practical than symbolic; the lot near the adjacent gas station is large enough to accommodate the hundreds of trucks. Latrun was also the ideal midpoint for cars and motorcycles coming from the center of the country.

Accompanied by hardly any serious Israeli media coverage, the trucks went out, horns blazing, as part of a global movement inspired by Canada’s “Freedom Convoy” to demand an end to any and all COVID-related legislation. In Israel, this means an end to the “Special Powers Law” that grants the government extended powers during pandemics and is valid through 2022.

Without any place to park, most of the truckers simply drove through the capital. The organizers didn’t want participants breaking laws or getting fined. So thousands of people, from Tel Aviv “leftists” to right-wing “settlers,” converged on foot on Menorah Square, the grassy entrance to the Knesset, holding signs that read “Let Parents Decide” and “Green Pass = A Black Stain,” as protesters who looked like hippies beat drums as a battle-cry—and dance music. They marched and danced along Jerusalem streets and set up a tent city on the lawns surrounding the Knesset where they held lectures, mediations sessions and a musical Shabbat service.

“We’re trying to create momentum because every time we apply pressure, they change the regulations, they change the laws,” said Doron Nadav, a co-organizer, by the Knesset’s signage-plastered menorah. While no correlation has been proven, Bennett announced two days after the convoy began that the Green Pass system would not be extended beyond its March 1 deadline. Encouraged, another convoy (minus the trucks) went up again from Latrun on Feb. 18. 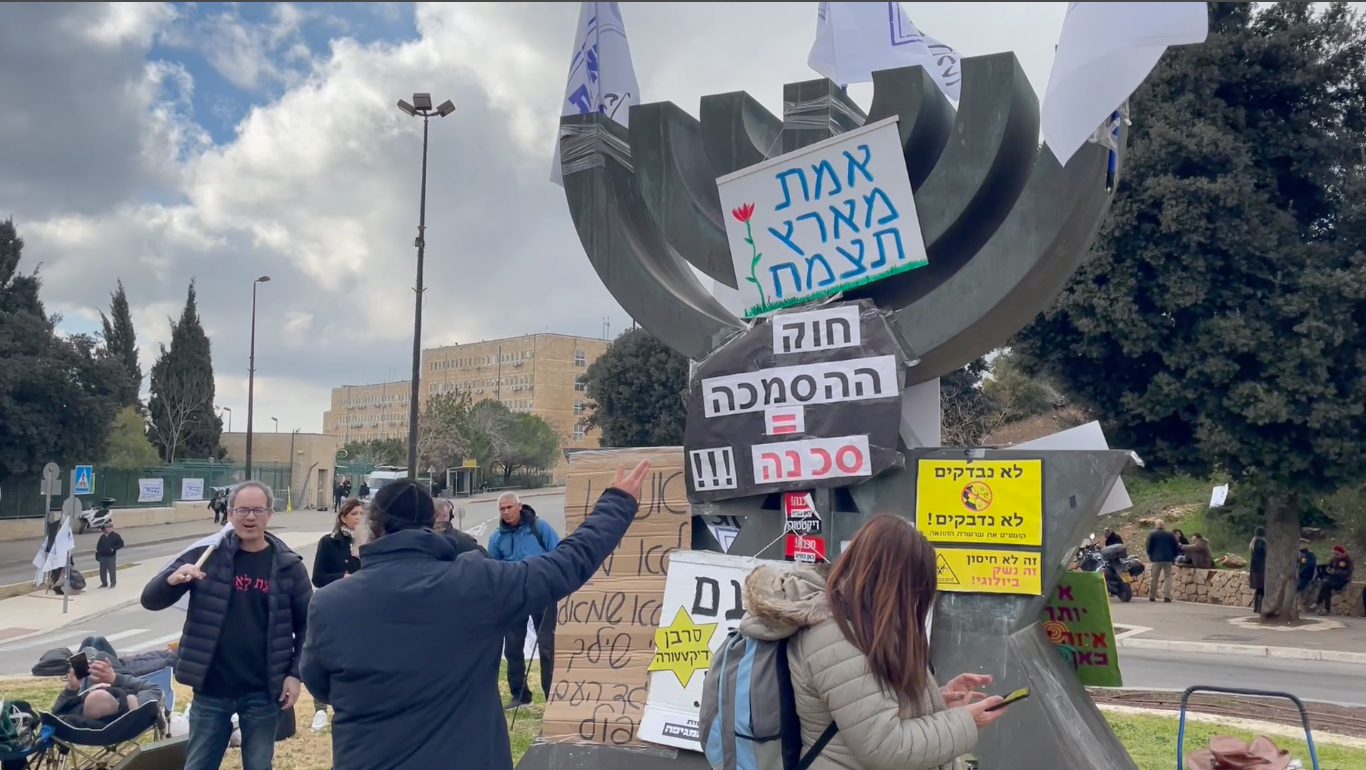 Protesters at the Knesset’s Menorah Square on Feb. 19, 2022. Photo by Orit Arfa.

Managed mostly via WhatsApp and Telegram groups, the Freedom Convoy had another goal: to let it be known that public opposition to Israel’s COVID policies indeed exists. Local media has largely ignored the protests every Saturday night outside the homes of Israeli leaders in recent months.

“For the past two years, it seems like there was a very narrow range of ideas that were allowed in the public eye, and the media didn’t cover everybody else, and it really felt like there was a narrative and if you didn’t fit the narrative you weren’t invited on the media, and that really pissed me off,” said Ilana Brenner, who came from Gush Etzion to show her support.

But on Saturday night, police broke up the party, literally. Municipal workers came, without warning and under the cover of onsite police, to dismantle the encampment, claiming they were illegal, although they didn’t present a court order. Three protesters were arrested but then released.

“They didn’t give us time to dismantle the tent,” said Nadav, “which we could’ve done on our own.”

Video footage shows protesters shouting “no violence” to each other as police made their way through the crowd, batons in hand.

“They threw all the supplies and equipment all over the place,” said Efrat Fenigson, an activist and marketing professional involved in the convoy’s publicity. “They brought large trucks and they put private equipment there—tents, bags. And they also damaged equipment and the tent for the food supplies which was very big because people donated food.”

The convoy’s legal team is exploring legal avenues to fight what they believe was an unjustified action. 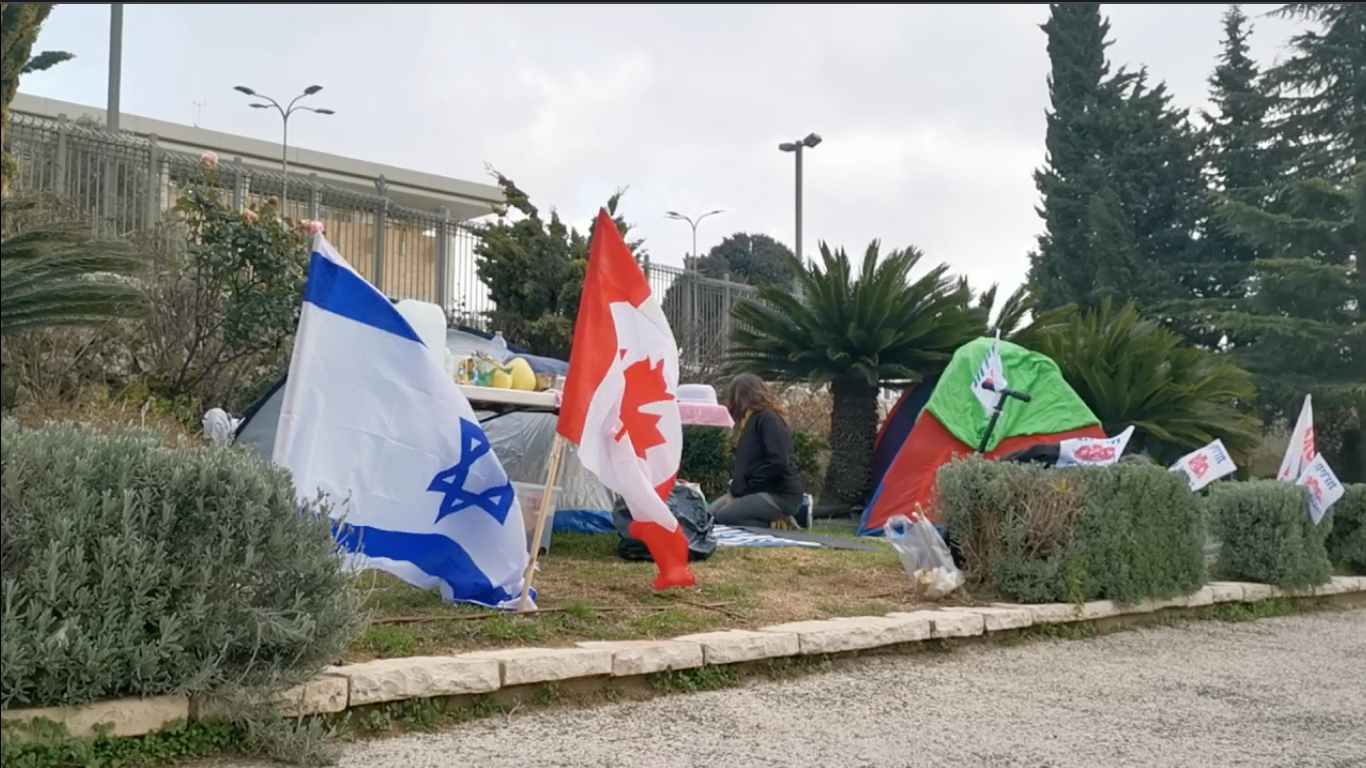 Tents put up by protesters outside the Knesset on Feb. 19, 2022. Photo by David Heller.

“They got a decision from above,” said Nadav. “When I speak with officers and police, they don’t look me in the eye.”

While the police showdown didn’t spark any media interest, the pro-freedom assembly has gained the sympathy and attention of some politicians.

“Without a court order, without warning, with the same trick: the police came to ‘assist the municipality.’ Involved citizens who mounted a quiet protest were violently evacuated,’” wrote Avidar.

The pending ease of Israel’s COVID regulations does not satisfy the protesters.

“It’s just a spin,” said Fenigson. “They haven’t really removed all the regulations. Also, the Special Powers Law is the underlying mechanism to make new laws. … They have full control of the on-off switch of this madness.”

Fenigson said the government crackdown only emboldens the protesters. Organizers, however, are considering a change in tactics. While they don’t plan to set up a tent city on an organizational level, they will consider focused events, like a mass Shabbat service near the Knesset compound, and sending convoys to other key destinations, like the airport or the Ashdod port.

For participants, the Freedom Convoy is more than a protest against COVID laws; it has become an existential battleground for Israel’s democracy.

“The movement for freedom is about every type of liberty, personal liberty,” said Fenigson, “whether the freedom to move, to make a living to voice your opinion or your freedom to choose what goes into your body.”