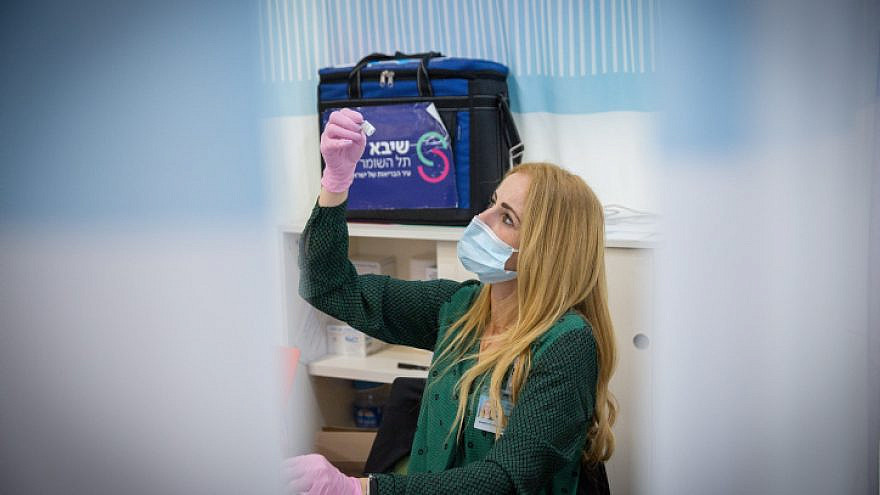 A staff member at the Sheba Medical Center at Tel Hashomer prepares a COVID-19 vaccine shot for a recipient on Jan. 10, 2021. Photo by Miriam Alster/Flash90.
Spread the word.
Help JNS grow!
Share now:

(May 12, 2021 / Israel21c) The Israeli Health Ministry has begun preparations to vaccinate adolescents aged 12 to 15 against the COVID-19 virus, after news this week that the U.S. Food and Drug Administration has approved the Pfizer-BioNTech vaccine for children in this age group.

Health Ministry Director-General Hezi Levi is holding meetings with representatives of Israel’s health management organizations, pediatric doctor associations and other relevant bodies in preparation for the expansion of the inoculation drive, the ministry announced in a statement.

It is also holding talks with Israel’s HMOs, which administer the bulk of vaccine shots, to ready the new campaign drive.
The move comes after the FDA declared on Monday that the Pfizer vaccine is safe for younger teens and offers strong protection against the coronavirus.

Pfizer tested the vaccine in the United States on more than 2,000 volunteers aged 12 to 15.

The study found there were no cases of COVID-19 among fully vaccinated teens, compared to 18 among kids given a placebo. Researchers also discovered that the kids developed higher levels of virus-fighting antibodies than found in earlier studies of young adults.

The children in the study received the same dosage of vaccine as adults and suffered the same mild side effects, including painful arms, fever, chills and aches.

Israel has so far inoculated nearly 5,084,000 Israelis aged 16 and up with both doses of the vaccine, while an additional 341,000 have received just the first shot. This is more than half of Israel’s total population.

Only the Pfizer-BioNTech vaccine has been administered in Israel. The country has purchased millions of vaccines to inoculate the nation’s children and to serve as booster shots as required.

On Tuesday, the Health Ministry announced that just 53 new COVID cases were detected on Monday, and the total number of active patients was 974.