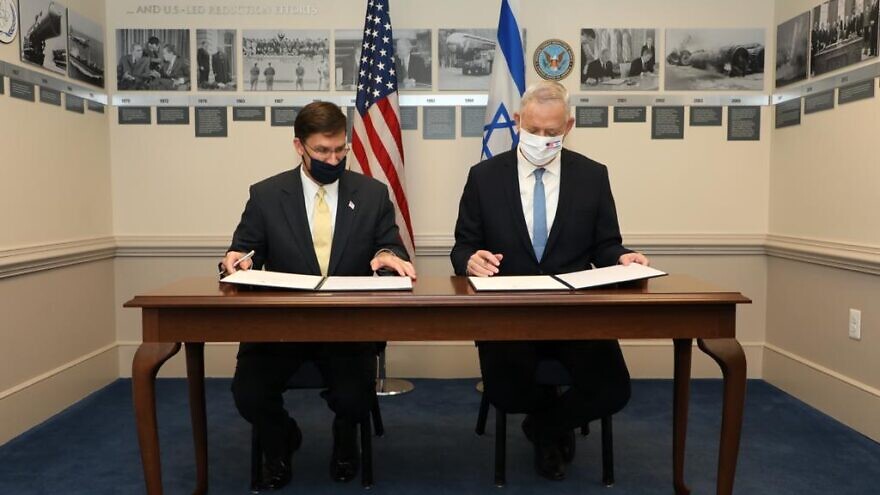 (October 26, 2020 / JNS) Days after Benny Gantz returned to Israel from the United States to hammer out a new procurement arrangement ahead of an imminent announcement by the United States over the sale of F-35 stealth fighter jets to the United Arab Emirates, a struggle over narratives remains underway between the Israeli Defense Minister and Prime Minister Benjamin Netanyahu.

Responding to accusations and reports that he had secretly given his blessing for the sale of the jets without informing the defense establishment, Netanyahu stated on Saturday evening that “the truth is simple. There was no agreement, no condition. We only agreed yesterday after lengthy talks held by the professional echelon in the Defense Ministry.”

Gantz responded soon afterwards, saying, “As defense minister, I can determine that the defense establishment did not know about and was not informed via the prime minister about negotiations for the provision of quality weapons systems to the UAE.”

Gantz spoke two days after he paid a lightning visit to the United States, where he concluded an agreement with U.S. Secretary of Defense Mark Esper—an agreement that Gantz said will “ensure the quality edge of the Israeli defense establishment and the IDF in the coming decades.”

Speaking to JNS, a senior former defense source said that the central aspect of the agreement centers on securing U.S. loans for the early delivery of defense systems that have already been authorized for sale to Israel.

“The effort is to receive loans for earlier-than-planned procurements,” said the source.

Although neither Gantz nor Esper specified what these systems are, Israel is seeking to purchase additional Lockheed Martin-made F-35 fighter jets, and the Israel Defense Forces is due to announce which kind of new generation transport helicopter it will select to replace its aging fleet. Lockheed Martin has offered Israel its new CH-53K transport helicopter, while Boeing is offering its Chinook CH-47 platform.

Israel is also interested in purchasing Boeing F-15IA jets, which can carry more munitions than previous models. It’s due to purchase new Boeing KC-46 refuelers to upgrade its current fleet.

The platforms are expected to be purchased with U.S. defense assistance funds, which, under the Memorandum of Understanding in place between 2019 to 2029, amounts to $3.8 billion a year.

It remains unknown whether the arrangement will also see the delivery of the V-22 tilt-rotor vertical takeoff and landing aircraft, which the Israel Air Force has expressed an interest in, but lacked the budget to make progress on procurement.

On Thursday, Gantz’s bureau announced that a declaration had been signed with Esper to ensure America’s strategic commitment to safeguarding Israel’s Quality Military Edge (QME) in the years ahead.

In a statement, Gantz said: “We are entering a period of normalization in the Middle East, which can assist against the Iranian aggression in the region. Together with the U.S., and our veteran and new friends, we will ensure fruitful cooperation. I would like to thank the American administration, and in particular, my friend, Secretary of Defense Esper, who advanced this topic together with me.”

On Friday, Gantz and Netanyahu released a joint statement, heralding the agreement to ensure Israel’s QME—a rare sign of cooperation in an otherwise troubled relationship.

The statement said that Gantz had updated Netanyahu about the meetings he held at the Pentagon, in addition to the details of the agreement signed with Esper. It described the agreement as an achievement reached after an extensive dialogue that began with Gantz’s previous visit to the United States a month ago.

The agreement will allow long-term procurement plans to go ahead, Gantz stressed, and for advanced defense systems to reach Israel, “significantly upgrading its military capabilities, fortifying its security and Israel’s regional military superiority.”

The joint statement indicated that Israel will not oppose the sale of F-35s to the UAE “in light of the fact that the U.S. is upgrading Israel’s military capabilities and safeguarding its qualitative edge.”