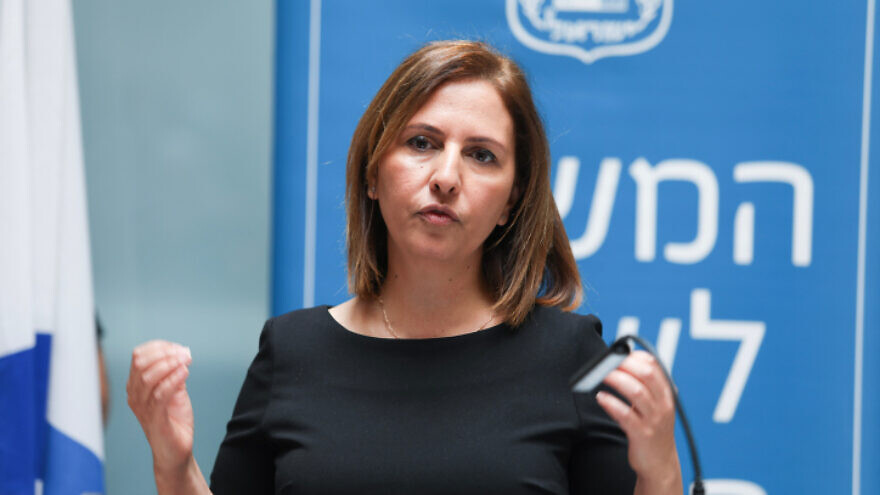 Gamliel confirmed on Saturday that she has contracted the coronavirus, becoming the fourth member of Prime Minister Benjamin Netanyahu’s Cabinet to become infected.

It was later revealed that Gamliel, 46, who resides in Tel Aviv, traveled to Tiberias to be with her husband’s family and prayed in a synagogue there, where she was apparently exposed to the virus.

The northern city is 150 kilometers (about 93 miles) from Tel Aviv. Lockdown directives imposed ahead of the High Holidays barred Israelis from traveling more than 1 kilometer (about half a mile) from their homes.

Worse for the minister, it was later revealed that she had apparently lied in her initial epidemiological questioning.

According to local media reports, Gamilel first claimed that she had been infected by her driver, and she only subsequently admitted that she traveled to Tiberias.

Attorney General Avichai Mendelblit has been asked to rule on whether the minister should be held liable for the violation. He is expected to rule on the matter later this week.

Faced with scathing criticism from across the political spectrum, including calls on Netanyahu to fire her, Gamliel released a statement saying that she “made a mistake,” but maintained she did not violate lockdown directives per se.

“I acted in line with guidelines, though it is possible I erred in my judgment. I am sorry, I will pay the fine,” she said.

Her office released a statement saying, “Prior to the lockdown, Minister Gamliel and her husband made the decision to stay in Tiberias with their nuclear family and did so in accordance with the guidelines that allow said departure.

“The minister prayed in synagogue on Yom Kippur and wore a mask at all times, as instructed. Contrary to allegations, the minister fully cooperated in the epidemiological investigation by the Health Ministry.”

It remains unclear whether Netanyahu plans to take any disciplinary action against Gamliel.

“I suggest waiting until we have the full picture,” Netanyahu said at the start of a coronavirus cabinet meeting on Monday. “We are all committed to following the directives. That includes ministers, Knesset members of and all elected officials.”

The Movement for Quality Government in Israel called on Gamliel to resign.

“If the public is expected to obey tough instructions, it should not be possible that a public representative flouts them. We are at the height of a crisis of trust between the public and politicians, and this violation only makes a bad situation worse,” it said in a statement.

“An epidemiological investigation is not a privilege but an obligation designed first and foremost to protect the public. To apparently lie knowingly in the investigation does the most serious harm to the public welfare,” said the statement.

Gamliel is not the only parliamentarian to be lambasted for flouting lockdown instructions.

A statement by the opposition party said that Levy will adhere to whatever fine is imposed on him as a result.