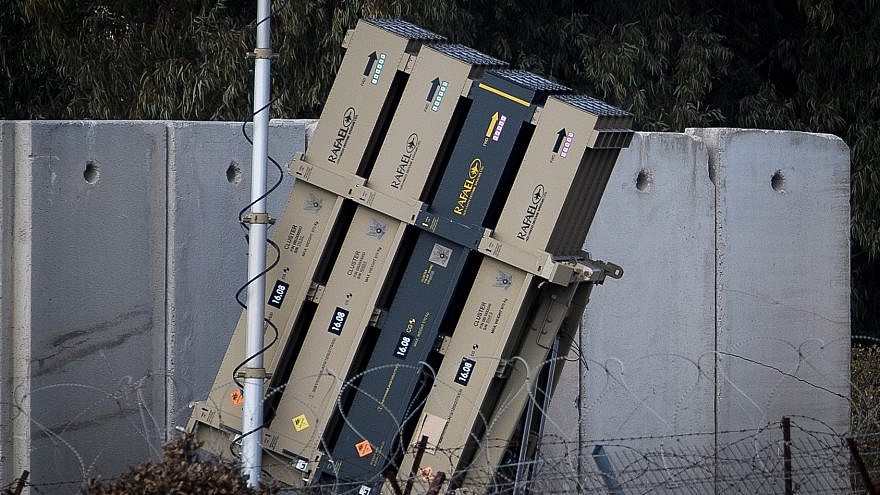 (June 14, 2021 / JNS) The Israel Defense Forces have beefed up the deployment of Iron Dome air-defense systems throughout the country as tensions rise with the Hamas terror organization in the Gaza Strip, a report by Kan News said on Monday evening, the day before a planned flag march in Jerusalem is set to go ahead.

The Israeli defense establishment assesses that Hamas is unlikely to launch rockets, according to the report, but that violent disturbances in Jerusalem and surrounding areas are also distinct possibilities.

Hamas and Fatah have called for a “Day of Rage” on Tuesday in Jerusalem and areas of the West Bank in response to the planned march.

Last week, Israel requested Egyptian intermediaries to “calm Hamas down ahead of the march,” said the report, adding that Israel said it reserved its right to hold the flag march in a non-provocative manner. Interior Security Minister Omer Bar-Lev approved the Jerusalem event following a situation assessment meeting held with security chiefs.

Thousands of police officers will fan out across the Jerusalem area and other potential hot spots on Tuesday in the north, as well as in Lod, which saw violent Arab-Israeli rioting last month during the 11-day conflict with Hamas.

IDF Chief of Staff Lt. Gen. Aviv Kochavi said the military is prepared for the possibility of a resumption of fighting in the Palestinian arena, saying that the situation “is explosive,” according to a report by Walla.

“As far as the IDF is concerned, the past is not what the future will be,” Kochavi was quoted as saying in reference to IDF responses to future possible attacks by Hamas on Israel.