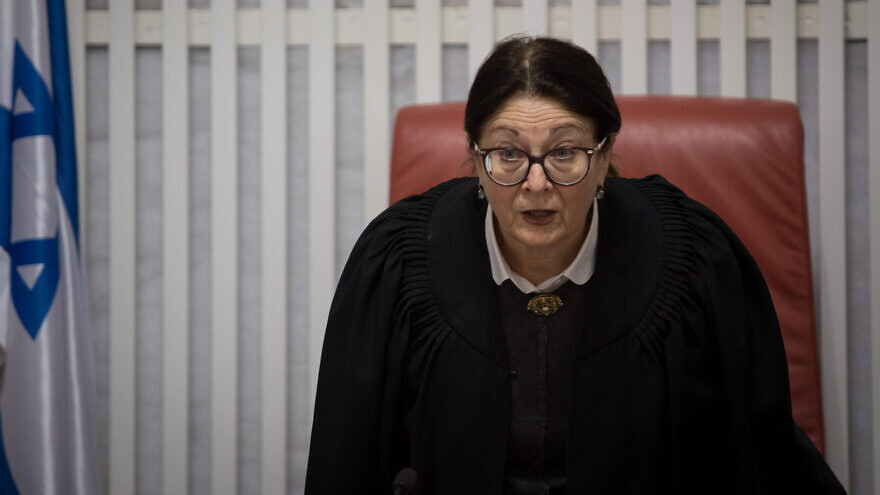 (July 25, 2022 / JNS) The Israeli Supreme Court’s July 21 ruling upholding a law under which convicted terrorists may be stripped of their citizenship has angered many in Israel’s nationalist camp, who argue that the ruling actually renders the law toothless.

The “Citizenship Law,” originally formulated in 1952 and which has since undergone amendments, permits the state to revoke citizenship for activities loosely defined as “breach of trust,” which include acts of terrorism.

The Supreme Court appeared to endorse the law in the opening sentence of its ruling, which states, “There was no constitutional flaw in the arrangement that makes it possible to revoke the citizenship of a person who has committed an act that constitutes a breach of trust against the State of Israel.”

Indeed, some right-wing politicians praised the decision. “Finally justice will be done here and it will be possible to deny citizenship to terrorists. I welcome the decision of the Supreme Court, for its determination that the state is allowed to deny citizenship to those convicted of harming its security,” said Finance Minister Avigdor Liberman.

However, Interior Minister Ayelet Shaked hinted that something was amiss: “The Supreme Court confirmed the obvious—whoever acts deliberately to harm the State of Israel cannot be part of the community of its citizens. However, unfortunately, the Supreme Court adopted an interpretation that is contrary to the language of the law and must grant terrorists a different permanent status in Israel.”

Menashe S. Yado, an attorney for Honenu, a Zionist legal aid organization, who represented a group of bereaved families in the case, went still further, telling JNS that the court in fact “emptied the law of meaning.”

The ruling requires the state to offer terrorists “permanent residency” to replace the revoked citizenship, and demands that terrorists receive the same social benefits they would have been eligible for as citizens, he explained.

“The law was meant to deter terrorists from carrying out attacks … so as not to take advantage of their citizenship and Israeli residency in order to betray the country and carry out attacks against it,” he said. “The Supreme Court simply neutralized any realistic possibility of revoking citizenship. It ruled out the law’s intention to deter, to prevent and to punish. It said the intention of the law is purely declarative, so that even if a person is deprived of citizenship, one must also ensure that he receives all the rights a citizen receives,” he added.

The court argued in its ruling that leaving someone stateless creates “tension with various provisions in international law,” and that “a permanent residence permit” would resolve the matter.

Amir Fuchs, a senior researcher at the Israel Democracy Institute (IDI), opposes the idea of revoking citizenship and considers the law “unconstitutional” because it “offends human dignity” and contradicts international agreements. However, he praised the court’s decision that a person whose citizenship is revoked must be provided with permanent residency.

“It has to be stressed that the original law did not grant the right to permanent residency,” he told JNS. “They [the court] interpreted, or kind of manipulated, the interpretation of the law, so in case there is a use of this removal of citizenship it would be constitutional. The verdict made it a more proportional solution,” he said.

Fuchs disagreed that the law was meant as a deterrent or punishment.

“It’s just a statement that, because of such a grave offense, it is not logical that someone will remain the citizen of the state,” he said.

He admitted that deterrence and punishment were among the justifications for the legislation offered to the court by the State Attorney’s Office, but noted that the court had rejected the argument.

“The court didn’t accept it. It said the law doesn’t have any deterrent value,” he said.

In its ruling, the court reversed the revocation of citizenship of the two terrorists in the case, one of whom wounded 24 in a Tel Aviv bus bombing in 2012 and the other of whom wounded four in a vehicular and knife assault in 2015.

In its summary of the ruling, the justices explained that the decision was based on procedural issues, and gave the Interior Minister 120 days to resubmit the request for revocation of citizenship.

‘The verdict was disconnected from reality’

Yado took issue with the justices’ explanation, pointing to statements made in the full ruling by Supreme Court President Justice Esther Hayut.

“The president [Hayut] said ‘the law is neutral. It permits a request to revoke citizenship from both Jews and Arabs.’ She then says, ‘Selective enforcement sharply contradicts the principle of equality before the law,’ ” he added.

“The verdict was disconnected from reality,” argued Yado. “You won’t find a single word in it about the Israeli-Palestinian conflict, about the fact that the terrorists receive every month a salary from the Palestinian Authority, that this massive terrorist organization pays out a billion shekels every year in terrorist salaries, or that the State of Israel must defend itself against growing terrorism. This is why we are so angry. It’s a major blow.”

Knesset Member Simcha Rothman of the Religious Zionist Party told JNS that the verdict is a perfect example of the court’s modus operandi. When faced with a case that could cause a public outcry, but which contradicts its worldview, it will appear to endorse the law while in fact emptying it of content, he said.

For the Knesset, it’s more problematic than if the Supreme Court had simply canceled the law, Rothman continued.

In his 2019 book on the court, Mifleget Bagatz (“The High Court Party”), Rothman writes that if the court cancels a law the Knesset can legislate it anew, but “turning an actual law… into a declarative law lacking meaning makes it very difficult for the legislator to fix the situation. How to contend with legislation that hasn’t been disqualified, but on the other hand is completely stripped of its meaning? Does the Knesset need to add to the law the words, ‘This time we mean it,’ so that the court will consider it?”

Yado wouldn’t comment on the court’s methods, saying, “I only know that, on the one hand, the court handed down a decision that emptied the law of its content and, on the other hand, the court spokespeople highlighted and headlined the fact that the court agrees with the law. So, there was a certain duality between the way the decision was presented by the spokespeople as a pro-nationalist decision when it was actually in practice clearly anti-nationalist, negating national interests and values.”