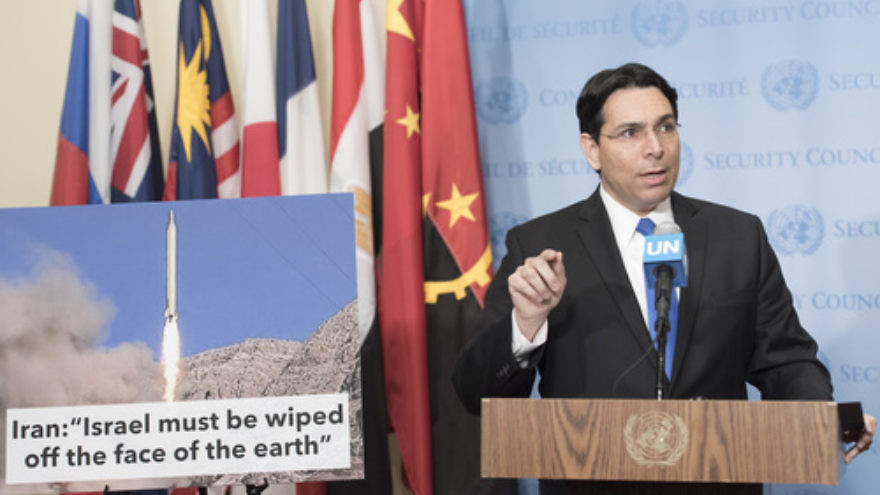 (March 27, 2016 / JNS) “Every week there is an attack at the U.N. against Israel,” Israeli Ambassador to the United Nations Danny Danon told me at the recent American Israel Public Affairs Committee (AIPAC) conference.

In the week that followed our interview, the U.N. Human Rights Council (UNHRC) appointed a Canadian legal expert who has expressed anti-Israel views to the post of special rapporteur on Palestinian human rights. The UNHRC also adopted a measure that calls for the creation of a database—or what Danon called a “blacklist”—of businesses “involved in activities” in Judea and Samaria.

But what can Israel actually do about its concerns on decades of U.N. bias? Can Israel even go as far as reversing the trend? That’s what I asked Danon in Washington, DC, before the unfolding of this week’s Israel-related U.N. controversies. The ambassador, who was appointed to the role last August, stressed that while bias and double standards should still be called out for what they are, Israel also needs good cop advocacy at the world body.

“When I stepped in, I told my staff we would push a positive agenda,” Danon said. “That’s what we are doing. Almost every week we have an event at the U.N. It can be an Israeli singer, or it can be a panel about water technology in Israel. We create the atmosphere, and it is working—that Israel is not all about the conflict with the Palestinians, but we have a lot to offer the U.N.”

The last time I interviewed Danon, in July 2014, he explained that he takes “a direct approach, not being wishy-washy on issues, even if it means I have to confront the chairman of my own party (Likud)—the prime minister—on very important issues.” The same month, Prime Minister Benjamin Netanyahu dismissed Danon as deputy defense minister for doing just that—criticizing the Israeli government’s handling of the Gaza war. But in 2015, Danon re-entered Netanyahu’s cabinet as minister of science, technology and space, before being appointed U.N. envoy.

Danon said he hasn’t stopped speaking his mind, but simply does so in a different capacity. The following is the rest of his interview with JNS.org at the AIPAC conference.

JNS: How can Israel change the U.N.’s approach to the Jewish state?

Ambassador Danny Danon: “Even when you lose a vote, it’s important to think about how the countries are voting. For example, this week, when there was a lot of discussion about the status of women at the U.N., there will [ultimately] be only one resolution, against Israel [but not against any other country]. We held a few events at the U.N., we showed the real face of Israel. The VP of Intel flew in to address one of the conferences we held. We brought three young engineers from around Israel to show what they are doing. But still there will be one resolution, condemning only Israel, and blaming Israel for domestic violence among the Palestinians. So for that vote, it’s important to see how the democracies are voting, the European countries.”

How has it been to work with Samantha Power, America’s U.N. ambassador?

“We work very closely. I had the chance to accompany her on a visit to Israel. We had a chance to take her in a helicopter, to fly to the [Israel-Gaza border] checkpoint at Kerem Shalom, to see the real dilemma that we are facing. She saw [what] we are allowing to go into Gaza, and she saw what they are trying to smuggle in. She saw the cement. We told her, we know that a major part of the cement will go to the [Hamas terror] tunnels….So I think it was a very important trip, and we do get the support of the American [U.N.] mission. We had some victories in the last few months. One of them was the fact that we got Yom Kippur to be recognized by the U.N., which is important because last Yom Kippur I was in New York, and I couldn’t attend the speech of President [Barack] Obama because it was on Yom Kippur….Now it’s an official holiday, like Christmas and Eid al-Fitr. We got that thanks to the support we got from the American mission, led by Samantha Power, for not only blocking initiatives against Israel, but also promoting initiatives we want to accomplish.”

Some members of the pro-Israel community were concerned about Power when she was appointed to the U.N. role, due to her previous history of controversial statements about Israel.

“I look at tacheles (Yiddish for “purpose” or “straight talk”). People wrote a lot of things about me as well before I assumed this position. I look at what the actual actions are, and as far as I can see until now, Samantha and her team are a real partner for us.”

Now that you mention it, yes, there were those who criticized your appointment as U.N. ambassador because they thought were you were too outspoken or not diplomatic enough. Looking back at it, what do you think about that criticism?

“I’m still outspoken. I still have my beliefs, and I speak very strongly and loudly on behalf of the State of Israel. What may be the only difference is that I used to do it to advance my political beliefs, and today I’m doing it representing the country. But in terms of the emotions and the energy, you can ask my colleagues at the U.N.—they know that every time they come to the hall when I’m there and the [Israeli] mission is there, we will fight there [for Israel].”

After Netanyahu dismissed you as his cabinet’s deputy defense minister in 2014, but proceeded to re-appoint you as a minister and now an ambassador, where do things stand now between you and the prime minister?

“We overcame the arguments that we had….Prime Minister Netanyahu, he knows me for 20 years. We had ups and downs, we argued, but I think he appreciates my willingness to fight for my beliefs, and that’s why he thought I’d be appropriate for this [U.N.] position. And I see today, you have to fight day and night.”

Some might perceive Iran’s recent test-firing of two missiles inscribed with the words “Israel must be wiped off the face of the earth,” in both Hebrew and Farsi, as merely the usual rhetoric from Iran. How do you try to counter such a perception?

“Their Hebrew is impressive, you have to admit….We cannot be relaxed. I had a press conference the day the [U.N.] Security Council convened to discuss it. I said it very clearly: If it had been written in French, or in English, or in Japanese, would the reaction have been the same? So, we cannot allow it, because [the Iranians] really are now testing the reaction from the rest [of the world], and if they will see that they can continue, the next step will be another missile with better capabilities. We do call for punitive steps from the [U.N. member] states bilaterally [against Iran], and also we expect the Security Council to take action.”

Where do things stand, from your perspective, on efforts to bring about Palestinian statehood through the U.N.?

“There is a lot of activity, many resolutions. We heard about New Zealand’s activity, and the French initiative. There will be other initiatives. We believe that the only way to promote peace in the region is through direct negotiations. The Palestinians, for them it’s easier, because on the ground they continue with the incitement—and we see the results of the incitement every day with stabbings and shootings—and when they come [to America], they call for U.N. resolutions. That’s a way to gain easy victories and avoid a real dialogue. It’s not helpful.”

At the same time, nations like Nigeria and India have been moving away from their traditional pro-Palestinian stances at the U.N. by abstaining in votes on pro-Palestinian resolutions. What do you think about that development?

“I think it is very important. In the U.N., every vote counts. We see the change a lot in private conversations, and now we’re trying to get that support that we have quietly and make it public. And it’s not only in places like Africa, some of them are even moderate Arab countries…we can work together [with them] on certain issues.”