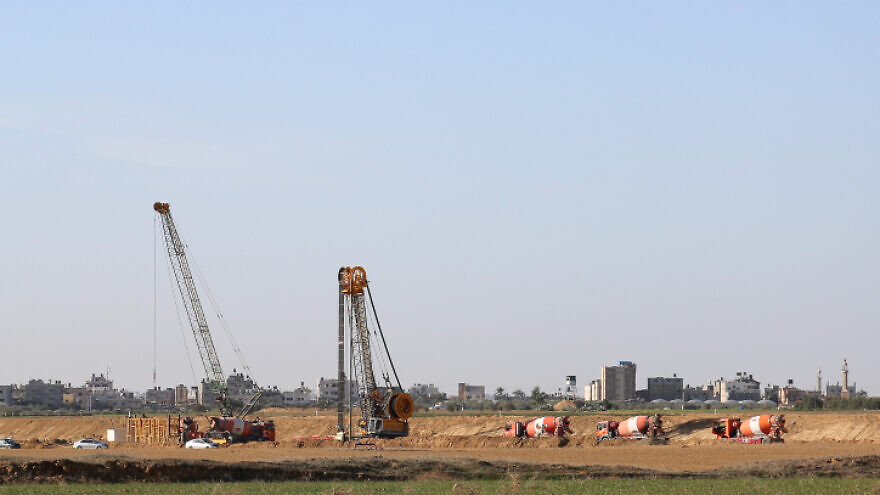 A view of construction work on the fence on the border between Israel and the Gaza Strip, Dec. 31, 2019. Photo by Flash90.
Republish this article
738 WORDS
Spread the word.
Help JNS grow!
Share now:

(October 23, 2020 / JNS) Israel’s underground anti-tunnel barrier and detection system passed an important test this week when the Israel Defense Forces announced that for the first time, the barrier’s sensors alerted the military that a Gazan cross-border attack tunnel had come close.

Within little time, IDF engineering forces were able to locate the tunnel, which was dug by Hamas. It appears as if the terror organization that runs the Gaza Strip may have been trying to probe the new barrier, which is nearing completion, and stretches across 55 kilometers (40 miles) of the Israeli-Gazan border.

The IDF said that each such tunnel is a significant financial investment on the part of any terror entity that digs it. As IDF Spokesperson Lt. Col. Jonathan Conricus told reporters earlier this week, it’s money that “could be and should be spent to improve conditions of life in Gaza. It went to digging the tunnel instead, and this is a very unfortunate decision for Gaza.”

The construction of the barrier, which complements an above-ground border barrier complete with its own advanced sensors, is a vital accomplishment by Israel’s defense establishment, which provides security to southern communities that have faced the threat of terrorist squads emerging from tunnels on killing and kidnap raids for years.

The threat was painfully realized during the 2014 conflict between Israel and Hamas, when Gazan armed cells emerged on the Israeli side of the border and launched deadly raids on military forces that stood in their path to protect nearby civilian areas.

Since then, the IDF has made progress not only with the barrier, but also with a world-first tunnel detection system, which helped the IDF uncover some 20 underground threats since 2014. The same technology was used by Israel to uncover eight Hezbollah cross-border tunnels destroyed in late 2018 and early 2019. Hezbollah had planned on sending thousands of its Radwan elite operatives through the tunnels in the next war, and target Israeli civilians and military personnel in a blow that could have reverberated for many years had the tunnels not been discovered.

Meanwhile, in Gaza, it would be a mistake to believe that terror factions have given up building offensive capabilities against Israel, although the apparent loss of the tunnel option is a severe strategic blow to them.

Nevertheless, the terror factions are compiling an arsenal of projectiles and trying to figure out how they can overwhelm Israel’s highly effective Iron Dome air-defense system in the next conflict. They are also seeking to build a fleet of armed drones and are investing heavily in sea-based attack cells, which use underwater tunnels to head out to the Israeli coastline for raids—a threat the IDF and Israeli Navy are preparing their own capabilities to address.

The underground barrier will likely reach completion in March. This display of the barrier’s technological capability could serve to discourage Hamas and Palestinian Islamic Jihad from wasting further funds on cross-border tunnels.

The latest tunnel was less than 100 meters into Israeli territory when it was discovered, and its early detection meant that Israeli communities nearby were at no risk. It was dug from Khan Younis in southern Gaza and was dozens of meters deep.

The last tunnel discovered by the IDF was found more than a year ago.

Still, Hamas’s military wing, the Izz ad-Din al-Qassam Brigades, maintains an extensive network of defensive tunnels that crisscross the Gaza Strip. Those tunnels are designed to let Hamas’s cells move operatives and weapons out of the reach of the Israeli Air Force, though the tunnels could become death traps for Hamas in a future war in light of the IDF’s advanced-detection capabilities.

Ultimately, the Gazan people have suffered the tragedy of Hamas’s choice to prioritize conflict against Israel over their basic economic and humanitarian needs.

Since 2014, more than 16 equivalents of Dubai’s Burk Khalifa (the tallest building on Earth) could have been built with the cement that has entered Gaza. And yet, that material has mostly gone into Hamas’s tunnel network, where diggers—equipped with oxygen tanks, ventilation systems, electric supplies and phone lines—work away in the service of Hamas’s war efforts.

Neither the tunnels inside Gaza nor Hamas’s other “projects” designed to threaten Israeli security will vanish any time soon, but the good news for Israel’s southern communities is that its underground fortification has proven its ability to keep residents safe.