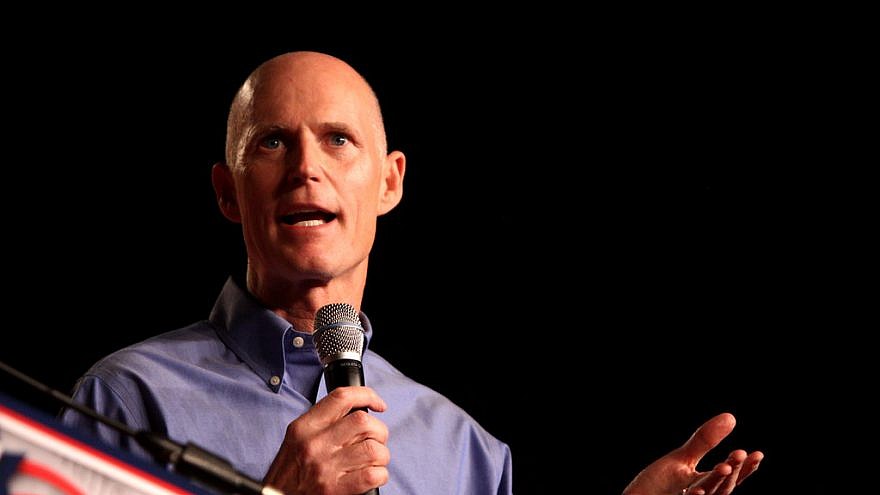 (November 21, 2022 / JNS) A pair of potential Republican presidential candidates say the lessons of this month’s midterm elections need to be absorbed, and quickly.

“Who’s delivering the message is part of that message. You can’t separate the two, and unfortunately, [we] had some very extreme and ultimately unelectable candidates running in November,” he said. “So, the message isn’t that we have to course correct or violently change who we are or what we’re about. But let’s get back to our basics: limited government, local control, low taxes, individual freedoms and responsibilities. Those have been at the core of the Republican Party for decades. And that served us very, very well.”

Florida Sen. Rick Scott, fresh off a difficult cycle as head of the Senate Republican fundraising arm, told JNS, “We have to talk about what our plan is going forward—why vote for us?”

Scott, concurring with Sununu and many others on the RJC stage this weekend, said it was time to get back to policy-driven politics.

Scott failed to unseat Republican Senate Leader Mitch McConnell, but said that despite heated conversations behind closed doors among the Republican caucus, the issue came down to a difference in approach.

“It’s not about people. I’m giving an idea of how I would how be the leader. I don’t believe in the old establishment Republican approach where we compromise with the Democrats, we cave in and [Senate Majority Leader Chuck] Schumer passes this stuff. I just don’t believe in that. I believe we’ve got to fight like hell for what we believe in,” he said, calling into question Republican strategy on deficits and border security.

While neither Sununu nor Scott have committed to a presidential run in 2024, they aren’t doing much by way of denying it, either. According to Sununu, it’s simply too early for most to commit.

“I think you’re going to see probably a dozen people get into the race in 2024. We are really far away from that, and the whole world could be politically very different between now and next summer, and then next summer to the first-in-the-nation primary in New Hampshire in early ‘24. I think we need to let the dust settle a little bit, spend some time with our families, enjoy some time at Hanukkah and Christmas, and just kind of get back to what’s important, which is family and our faith,” said Sununu.

He predicted President Joe Biden would not seek another term, introducing a new dynamic to the race.

“And I think we just get back to the lesson that winning in a primary doesn’t matter unless you can close the deal in November. It’s just that simple,” said Sununu.

In the meantime, Scott said the Senate is a place where “we’ve got to really promote why the relationship with Israel is an important relationship, why they’re an important ally, and then go sell it.” He criticized the FBI for apparently opening an investigation into the death of Palestinian-American journalist Shireen Abu Akleh, who was killed during an Israel Defense Forces counterterrorism operation in Jenin in May.

“I think we have to find out exactly what’s happening. Unfortunately, the FBI and Justice Department has got to figure out how to be way more transparent about what they’re doing, whether it’s what the FBI is doing in Israel or whether it’s the raid of Mar-a-Lago, whether it’s the special counsel to review the former president. I mean, these things are unprecedented in our history,” he said.

His home state of Florida, where the RJC claims 45% of Jews voted Republican this cycle, is striking the right message with voters, resulting in the only red wave in the country this month, he added.

“With every family—Jewish families and non-Jewish families—focus on the things that are important. It’s their livelihood, their children’s education, the crime rate,” said Scott. “The other thing in Florida that a lot of my Jewish friends care about is the relationship with Israel. So, you need to be supportive of the relationship with Israel. And I think if you talk about the issues that people care about, they tend to vote for you.”

Sununu said the party needed to engage its audiences one-on-one, “in their living rooms, in their businesses, and treat them as the individuals they are, because they’re empowered. Their vote matters, their voice matters.” He noted that “what the pressing issue is in the Hispanic community in Florida might be very different than the issues of a Jewish community in New York. That’s why this kind of big, top down, one size fits all [approach] out of Washington never works. And it’s almost insulting.”

He suggested finding good Republican Jewish candidates in New York to engage on those issues.