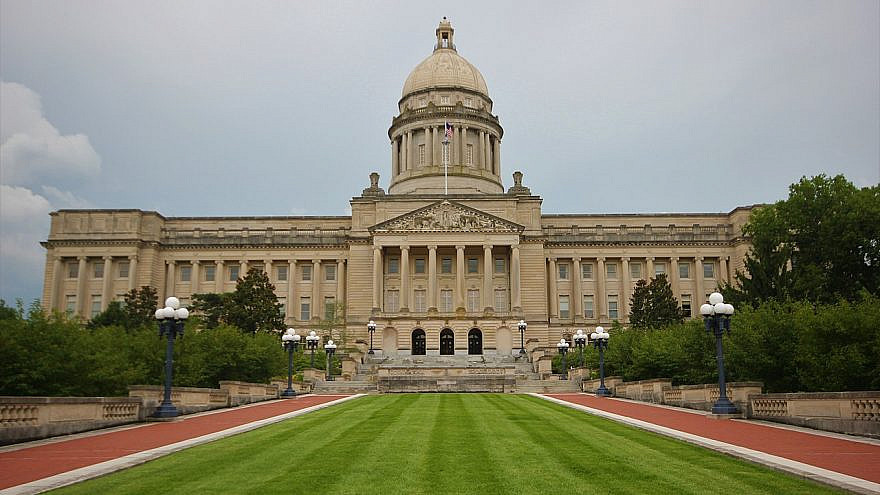 (February 25, 2021 / JNS) Kentucky is expected to be the first state to officially adopt the International Holocaust Remembrance Alliance’s definition of anti-Semitism after the measure was included in a state resolution to condemning anti-Semitism.

The measure was introduced by State Sen. Ralph Alvarado, and State House Reps. Dan Fister and Kelly Flood. It passed the Kentucky State House on Wednesday with no objections and the state Senate with every member present signing on as a co-signer. Gov. Andy Beshear, a Democrat, is expected to sign the measure on Friday.

The recognition comes after a series of anti-Semitic incidents across the Bluegrass State in the past year, including hate-filled flyers being left in various neighborhoods, vandalism at a Jewish center, a car attack and threatening phone calls made to Rabbi Shlomo Litvin of Chabad of the Bluegrass.

“The fact that this is happening right around Purim is especially meaningful, as Purim tells the story of standing up to the genocide that Haman had planned for the Jews,” said Litvin, who spearheaded the resolution. “Our legacy is not just fighting Haman [back then], but fighting the Haman of every generation. It is a fight that needs to happen around the world, in the halls of Congress and on college campuses.”

Also lending their support to the measure was Chabad of Kentucky under the direction of its longtime founder, Rabbi Avrohom Litvin, and the group Jewish Advocacy of Kentucky.

“There have been a fair number of acts in Kentucky, particularly here in the Lexington area, so it’s very nice that our elected officials in the house and senate in the state of Kentucky are willing to put their yea or nay on the record and make it clear who supports and is showing they are against anti-Semitism,” said Aaron Rothke, president of Jewish Advocacy of Kentucky. The younger Rabbi Litvin is also active in the group.

Noting that the state does not have a hate-crime statute, Rothke added that “more still needs to be done … but this is a wonderful first step, and I’m impressed it happened quickly.”