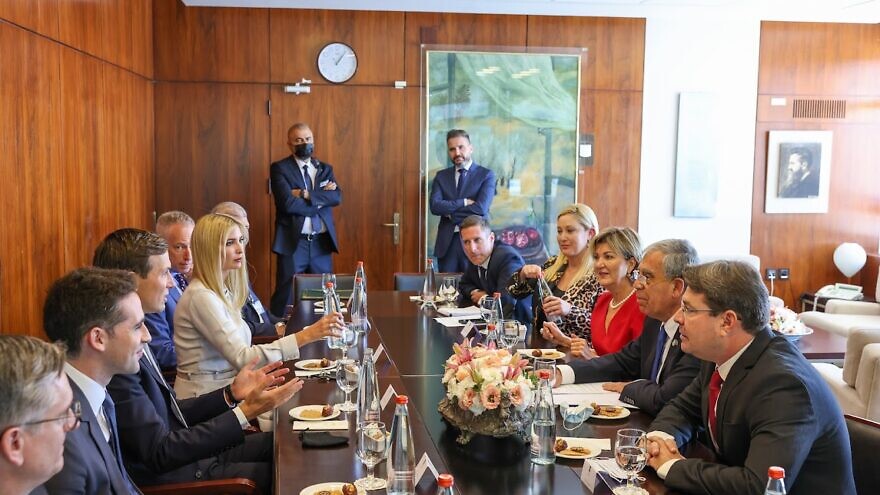 Jared Kushner, who served as senior adviser to his father-in-law, former U.S. President Donald Trump, and was a key negotiator in helping to make the accords a reality, and his wife, Ivanka Trump, with Israeli politicians in the Knesset as part of the newly formed Abraham Accords Caucus in the Knesset on Oct. 11, 2021. Photo by Yonatan Sindel/Flash90.
Republish this article
1022 WORDS
Spread the word.
Help JNS grow!
Share now:

(October 12, 2021 / JNS) Several hundred dignitaries and guests, including Israeli government ministers, Knesset members, foreign ambassadors and mayors gathered in the Knesset auditorium on Monday afternoon for the launch of the Knesset’s Abraham Accords Caucus, whose mission is to further the progress made through the U.S.-brokered normalization agreements between Israel and the United Arab Emirates, Bahrain, Sudan and Morocco.

In attendance was Jared Kushner, who served as senior adviser to his father-in-law, former U.S. President Donald Trump, and was a key negotiator in helping to make the accords a reality, accompanied by his wife, Ivanka Trump.

Kushner recently co-founded (along with media mogul Haim Saban) the Abraham Accords Peace Institute to continue promoting normalization between Israel and her neighbors.

The new Knesset Caucus is co-chaired by Likud Knesset members Ofir Akunis and Ruth Wasserman Lande from the Blue and White Party.

The longtime former prime minister and current head of the opposition in the Knesset Benjamin Netanyahu received a standing ovation when he walked into the room.

Netanyahu, who was prime minister last year when the accords were signed, used his remarks to explain four reasons the agreements came into being.

He said that the first condition was the fact that Israel’s “strength increased.” He shared how economically, Israel went from a semi-socialist economy to a free market, and at the same time became much stronger militarily, which made it an asset in the Arab world when standing up to Iran and Islamist groups.

Secondly, Netanyahu said countries started to “go around the Palestinian veto”—in other words, recognize that negotiations could be made with Israel even without peace between Israel and the Palestinians.

Thirdly, Netanyahu shared (without singling anyone out) that several U.S. administrations and foreign-policy leaders believed that “the way to get the Arab states on board with peace was to create daylight between Israel and the U.S.”

He noted that the Trump administration took the opposite approach, and as a result, once there was “no daylight between Israel and the United States, the Arab governments understood that the road to Washington passed through Jerusalem and not Ramallah.”

Lastly, Netanyahu said that bold and imaginative Arab leaders were willing to take a chance at making peace with Israel. 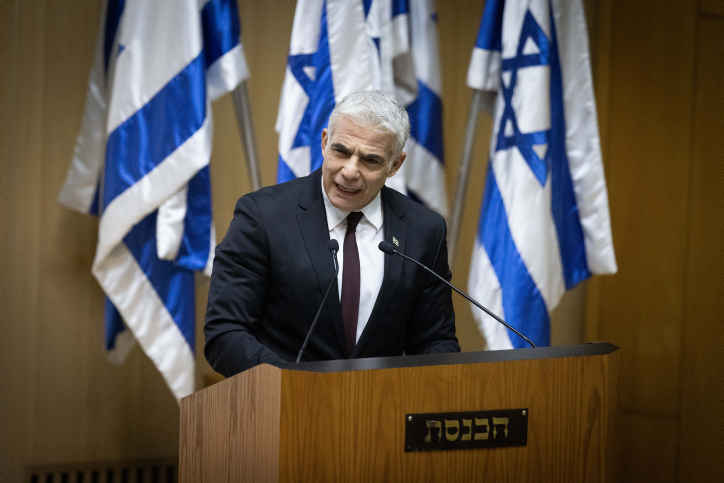 Israeli Foreign Minister Affairs Yair Lapid speaks at an event in the Knesset celebrating the one-year anniversary of the Abraham Accords, Oct. 11, 2021. Photo by Yonatan Sindel/Flash90.

At the same time, both members of the current Israeli government and the U.S. administration used their remarks to call on Israel to pursue a peace deal with the Palestinians as well.

Israel’s Foreign Minister Yair Lapid said that when he attended the ribbon-cutting ceremonies at the new Israeli embassies in the UAE, Bahrain and Morocco, he felt that he was cutting the “Gordian Knot” of hate, while also calling on the Palestinians to step forward for peace.

Israel’s Defense Minister Benny Gantz added that the spirit of the accords should be used in arriving at a peace deal with the Palestinians.

In addition, Michael Ratney, interim head of the U.S. embassy in Jerusalem, called the accomplishments and collaborations in the fields of investment, culture, academia and others thanks to the Abraham Accords “inspiring,” adding that the Biden administration was committed to working towards a two-state solution to solve the conflict between Israel and the Palestinians.

Kushner shared his experience as a passenger on the first commercial flight last year between Israel and the UAE, after the agreement was signed, especially when the El Al jet landed in Abu Dhabi and the image of the Israeli flag was on display for all to see. He said that his team realized how powerful the moment was, so they stayed up all night hammering out aviation agreements so the two countries could immediately start business development and launch the tourism market.

Kushner also noted that the accords were “metastasizing throughout the Middle East and the world,” pinpointing to other Muslim countries including Malaysia, Indonesia, Saudi Arabia and even Pakistan, possibly floating a normalization trial balloon between those nations and Israel.

“We’ve created a new paradigm in the region,” he said. “It’s imperative we set high expectations of what Abraham Accords can be.” 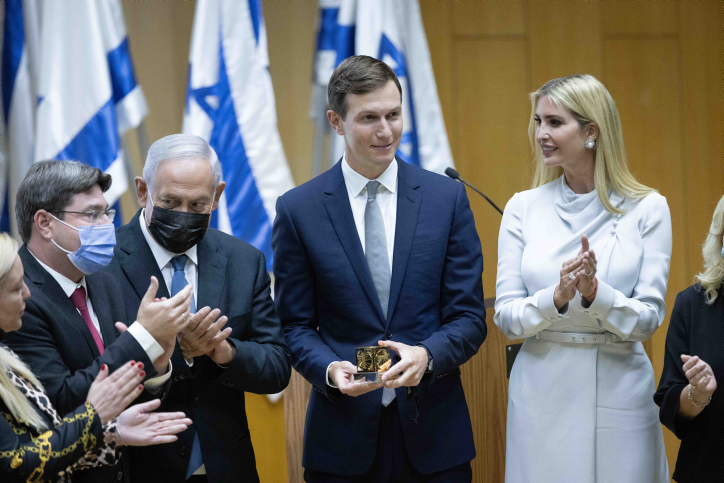 Jared Kushner, who served as senior adviser to his father-in-law, former U.S. President Donald Trump, and was a key negotiator in helping to make the accords a reality; his wife Ivanka Trump; Israeli officials; and former Israeli prime minister and now head of Opposition Benjamin Netanyahu at a Knesset event celebrating the one-year anniversary of the Abraham Accords, Oct. 11, 2021. Photo by Yonatan Sindel/Flash90.

Other countries that want to make peace

He said the fact that senior Moroccan diplomat, Ambassador H.E. Abderrahim Beyyoudh, who heads the Moroccan liaison office in Tel Aviv, spoke at the Knesset is yet another “incredible first in a year of firsts.

Lightstone concluded his remarks by reciting the Shehecheyanu blessing, a prayer said by Jews to offer thanks to G-d or to commemorate a milestone event.

Lande echoed Lightstone’s remarks, albeit from an Israeli perspective, saying that support for the accords and the caucus itself was apolitical.

As she told JNS, “the most important thing about this event by far is that it is bipartisan. The fact that we have a co-chairmanship of coalition and opposition in the leadership of this caucus—this is the essence, truly, I mean it from the bottom of my heart, to make Israel strong, resilient and able to really make peace with its neighbors. This is something that we must maintain—the very fragile bipartisan nature of this caucus and in general the unity of our country.”

Akunis told JNS that he deemed the caucus launch “a huge success.”