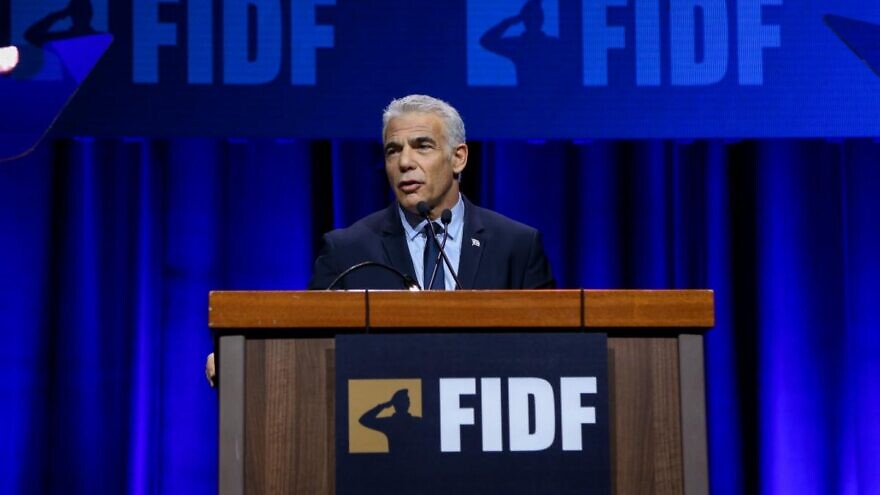 The event took place as Lapid visited the United States to give a speech to the United Nations General Assembly. The FIDF National New York Gala marked Lapid’s first public appearance in the U.S. since taking office in July.

“The fact that I am standing here today, as prime minister of the State of Israel, a free country, with a strong army, with friends like you, did not happen on its own,” said Lapid. “At every moment, Israel must be strong, free and secure, with a powerful army that can defend its citizens. On behalf of the State of Israel, and on behalf of the soldiers of the IDF, I salute you, my friends.”

The crowd appeared moved during a speech by IDF Sergeant First Class “M.”, who serves in the Oketz special forces unit. M. paid tribute to his former commanding officer, Maj. Bar Falah, who was killed earlier this month in a firefight with two Palestinian terrorists, one of whom was an officer in the Palestinian Authority security services.

“We are grateful to Prime Minister Lapid for his exemplary leadership and we are most honored to have him join us this evening at our annual FIDF National New York Gala in support of Israel’s soldiers,” said FIDF CEO Steve Weil. “There is no entity of individuals more critical to the existence of Israel and the safety of Jews worldwide than the soldiers of the IDF, and we are humbled to stand in strength and solidarity with Prime Minister Lapid in our common goal to support them.”

Peter Weintraub, the FIDF national board chairman since 2018, was honored for his service at Tuesday’s gala. Weintraub, a decades-long FIDF board member, completes his term as chairman next month. FIDF President Fred Gluckman, who was introduced on stage, will take over the role.

“We must muster our courage in the best way we can, both financially and physically and spiritually. Every single person gathered tonight is part of the FIDF tapestry of support,” said Weintraub. “Every person in this room counts and is counted upon. The picture is only complete when everyone is involved.”

Funds raised at the gala will be used to provide academic scholarships to combat veterans, financial assistance for soldiers in need and the families of fallen soldiers, support for lone soldiers throughout their service and educational, cultural and recreational initiatives.

In his speech, Lapid recounted a tale from his childhood. Speaking of the murder of his grandfather in a Nazi concentration camp, Lapid said he asked his father why the family didn’t run away, to which he responded, “We had no place to go.”