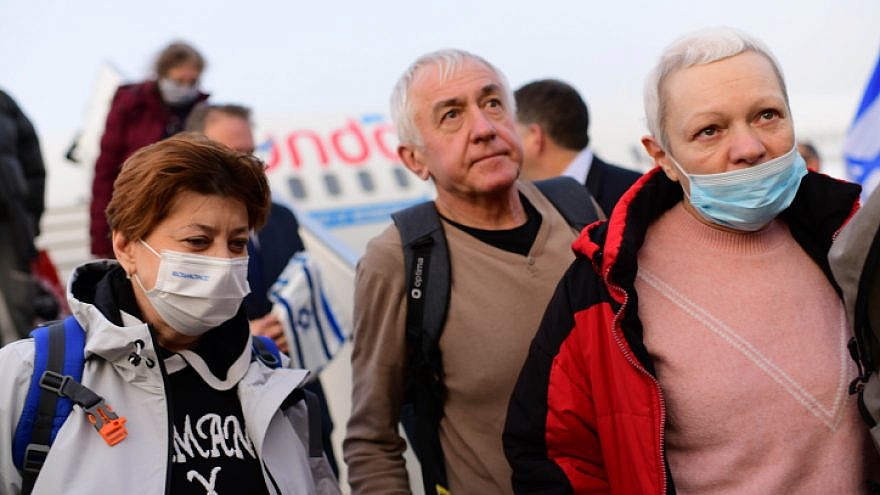 (January 16, 2023 / JNS) A recent surge in legal immigration has led to a decrease in Israel’s Jewish majority, according to an analysis of data from Israel’s Central Bureau of Statistics (CBS), Channel 14 reported on Sunday.

The Israeli Immigration Policy Center, an NGO established in 2012 to promote immigration policy which serves Israel’s strategic interests, found that last year’s 23-year record in the number of new immigrants had resulted in a 0.3% decline in Israel’s Jewish majority, to 73.6% from 73.9% at the end of 2021.

This continues a 30-year trend, with the country’s Jewish majority having declined by a total of about 10% over that span, losing about one percent every three years on average.

“It shouldn’t be possible for new immigrants to lead to a decline in the Jewish majority. This is a demographic deficit that will harm the Jewish identity and character of the country,” said Attorney Yona Sherki of the Israeli Immigration Policy Center.

In the last year, 77,000 people received status in Israel, including 71,000 new immigrants who entered under the “Law of Return,” which recognizes an individual with a single Jewish grandparent as eligible for citizenship. However, such people are not considered Jewish according to halacha, or Jewish religious law.

Of non-Jews who enter Israel, 85% on average immigrate under the Law of Return’s “grandparent clause.”

Regarding the Law of Return, then-Prime Minister David Ben-Gurion decided with the establishment of the Jewish state that: “Whoever was born to a Jewish mother and is not of another religion, or whoever converted according to Jewish law,” will be considered a Jew.

In 1970, it was ruled that the children and grandchildren of a Jewish person could immigrate to Israel by virtue of the Law of Return. During those years, many discussions were held in order to determine who is a Jew, and how to define a person who converts through a non-Orthodox conversion process, but to no avail.

The issue recently came to the fore after a wave of immigrants from Russia and Ukraine entered Israel following Moscow’s invasion of the European country, most of whom were not Jewish—only three in 10, according to mid-November data from Israel’s Population and Immigration Authority.

In November, Ashkenazi Chief Rabbi of Israel Rabbi David Lau urged the Knesset to amend the Law of Return to curb non-Jewish immigration.

The leaders of seven major Jewish and Zionist organizations earlier this month warned Israeli Prime Minister Benjamin Netanyahu that proposed changes to the Law of Return could affect the unity of world Jewry.

“Any change in the delicate and sensitive status quo on issues such as the Law of Return or conversion could threaten to unravel the ties between us and keep us away from each other,” the leaders stated in a letter addressed to the prime minister.

They were referring to coalition deals signed between Netanyahu’s Likud Party and the Religious Zionist and ultra-Orthodox parties calling for a change to the “grandparent clause.”