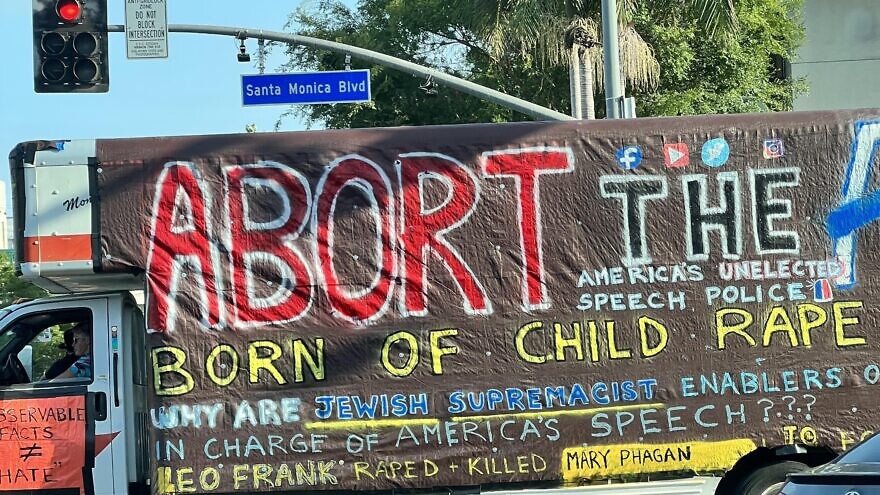 Anti-Semitic signs on a truck in Los Angeles on May 21, 2022. Source: Screenshot.
Spread the word.
Help JNS grow!
Share now:

The Goyim Defense League placed a banner reading “Kayne is right about the Jews” on the heavily trafficked Interstate 405 freeway last weekend, prompting Hitler salutes. Additionally, sand-filled bags stuffed with ant-Semitic flyers were placed on the lawns of residents of Beverly Hills, Westwood and Bel Air.

Councilmember Paul Koretz introduced a resolution, seconded by Councilmember Bob Blumenfield, for Los Angeles to adopt the IHRA definition in order to “expand the tools we have to fight this bigotry,” Blumenfield said in a statement.

The city lawmakers noted the definition’s recognition that anti-Semitism “is a certain perception of Jews, which may be expressed as hatred toward Jews. Rhetorical and physical manifestations of antisemitism are directed toward Jewish or non-Jewish individuals and/or their property, toward Jewish community institutions and religious facilities.” The IHRA definition also encompasses forms of anti-Zionism that constitute anti-Semitism.

If adopted, the resolution would require Los Angeles city departments, staff, elected and appointed officials, and contract agencies to familiarize themselves with the IHRA definition and associated reference materials, which they would incorporate in their day-to-day operations. To date, the definition has been adopted by 37 U.N. member countries and 320 non-federal government entities, including 22 U.S. states.

Koretz blamed the recent wave of anti-Semitism in Los Angeles on former President Donald Trump, stating that he “emboldened these factions of hate that had previously been relegated to dark, dusty corners of society.” Koretz’s remark echoes California Governor Gavin Newsom’s statement on the issue Monday.