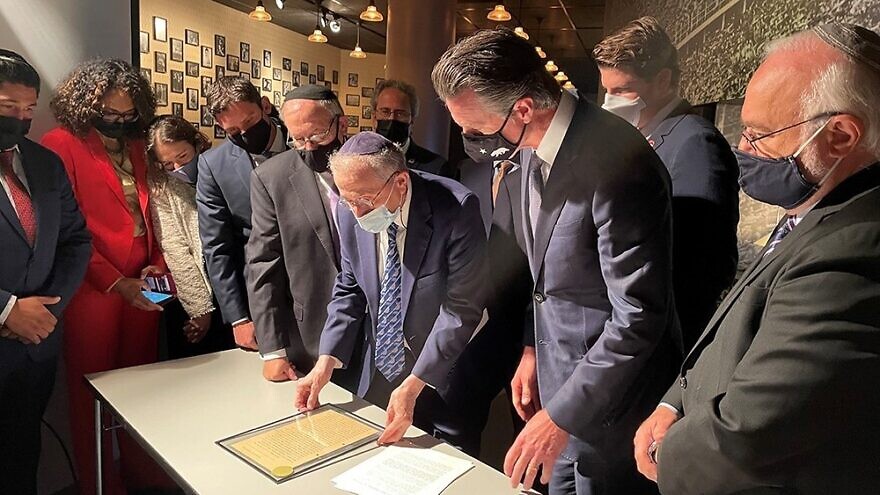 (October 24, 2022 / JNS) California Governor Gavin Newsom on Monday condemned the recent anti-Semitic incidents in Los Angeles, including a banner reading “Kayne is right about the Jews” on the Interstate 405 freeway.

“This weekend’s public display of anti-Semitic hate is another wake-up call to all of us that we must remain vigilant to protect our values and freedoms as Californians,” Newsom said, adding, “Our state is committed to protecting our diverse communities and will continue to lead the fight against racial, ethnic, and religious hate wherever it rears its ugly head.”

Simultaneously, the Democratic governor blamed the anti-Semitism on Donald Trump, stating, “The former president gave a platform to extremists spewing hate speech and we continue to see the dangerous consequences—from the insurrection on January 6th to Nazi salutes and anti-Jewish signs over the 405 freeway here in California.”

In addition to the sign referring to the series of anti-Semitic remarks by performer Kayne West, the Goyim Defense League posted two other banners which prompted Hitler salutes on an overpass along the freeway on Saturday.

Newsom touted California’s funding of “more than $150 million to support anti-hate programs that provide direct support for impacted communities and victims.” This year’s state budget, he noted, included $36 million for the California Holocaust Survivor Assistance Program, $10 million to fund an anti-bias education grant program and $5 million for the Los Angeles-based Museum of Tolerance.

South of Los Angeles, a teacher at San Diego’s Carmel Valley Middle School recently justified the placement of Adolf Hitler’s portrait alongside those of non-genocidal world leaders in a 7th-grade classroom, telling a Jewish student that “Hitler may have done some bad things, but he also had strong leadership qualities.”