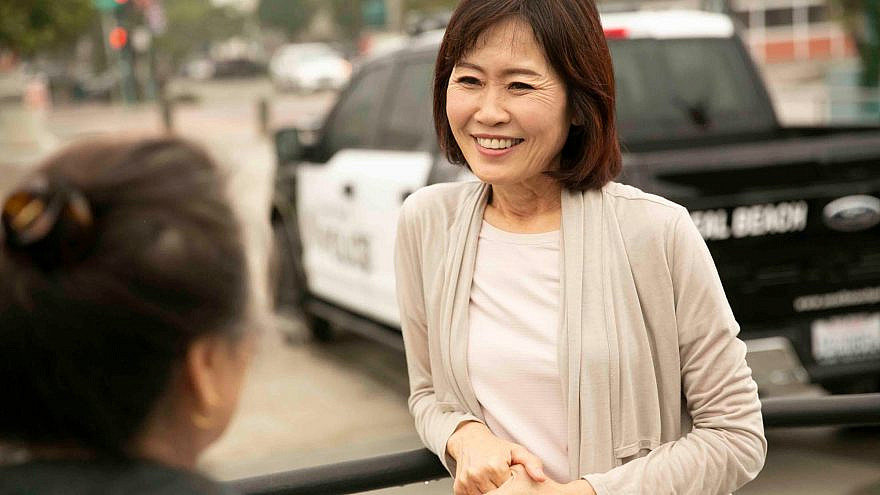 (January 28, 2021 / JNS) With just 51.1 percent of the vote, Michelle Steel, a Republican, unseated incumbent Democratic Rep. Harley Rouda in the Nov. 3 U.S. House of Representatives election in California’s 48th Congressional District, being one of the first Korean American women elected to Congress, joining Reps. Marilyn Strickland (D-Wash.) and Young Kim (R-Calif.), whose district is next to Steel’s.

“This can happen only in America,” Steel told JNS in an interview this month of her first-generation immigrant success story.

On Jan. 3, Steel was sworn as a member of the 117th Congress, which has a record number of Republican women and women overall.

Previously, Steel, who was born in the South Korean capital of Seoul, was a member of the Orange County Board of Supervisors and the California State Board of Equalization.

The 65-year-old is married to Shawn Steel, the Republican National Committee representative from California. The couple has two children.

JNS talked with Steel by phone on Jan. 25. The interview has been edited for brevity and clarity.

A: We really have to build our relationship. We have a strong relationship between Israel and the United States. A lot of presidents had been talking about the relocation of the U.S. embassy to Jerusalem, but President [Donald] Trump really did it. It was historical; it was just amazing what he did. I was really happy about that.

A: We have a lot of technology and innovation not just in my district, but in Orange County in Southern California. I was fascinated by Israel being so self-sufficient in its water supply that they don’t have to rely upon other countries.

A: I’ve never been to Israel, but my husband and daughter have been. I didn’t have the chance to go. I want to go soon hopefully.

I don’t remember when they went. But my husband was in Jerusalem on Christmas Day, and he was so touched. He texted me at that time, and I remember that. My daughter went when she was chair of the College Republicans. She was invited by the Israeli government, and she went there and was really amazed by it.

Q: Describe your interactions with the Jewish community before, during and after your campaign.

A: I joined a menorah-lighting, and I got an endorsement from Holocaust survivors. I tried to work very closely with the Jewish community in Orange County. I have an Orthodox Jewish chief of staff who has educated me, though not enough, so I’m still learning so much about the Jewish community. In Orange County, I worked with the sheriff and district attorney to secure places of worship and community centers, so I’m going to continue working in Congress to ensure support for security for Jewish institutions and all places of worship. It’s very, very important.

Q: What’s your reaction to U.S. President Joe Biden the United States will re-enter the Iran nuclear deal if the regime returns to compliance?A: I heard about reports of the U.S. possibly rejoining the Iran nuclear deal. That’s the worst thing ever that’s going to happen because we need a more peaceful Middle East, and we need the leadership to support our ally Israel. We need to stop the Iranian threat, preserve foreign aid to Israel and oppose a boycott of Israel. We hear a lot from Congress that we need strong leaders who are going to support Israel. Israel is keeping the peace in the Middle East.

Q: What is your reaction to the California ethnic-studies curriculum controversy, given that what’s been proposed for such curricula in high school and at the University of California have been determined by Jewish and pro-Israel groups as having anti-Semitic and anti-Israel elements? The curricula have also been slammed as far-left indoctrination.

A: It’s very divisive. A lot of parents are just relying on their schools and their curricula. We have to look at a lot of issues, especially anti-Semitism and anti-Israel sentiment. That has to really stop. The United States and Israel need each other, and we have to support each other. But they’re not teaching that in junior high or high school. That’s not really acceptable.